The Reds will be looking for some holiday cheer as Easter weekend arrives and the first game of a double-header that could prove crucial and we've got things covered here in our big match preview.

After returning to winning ways last weekend against Fleetwood Town it's straight . back down to business as we welcome Shrewsbury Town to Oakwell in our penultimate home fixture of the Sky Bet League One season.

That victory over the Cod Army last Saturday also signalled a return to goal-scoring form for the Reds with four goals, and each scored by different players.

The 4-2 win lifted Barnsley back into the second automatic promotion spot, helped by rivals Sunderland going down 5-4 at home to Coventry City. 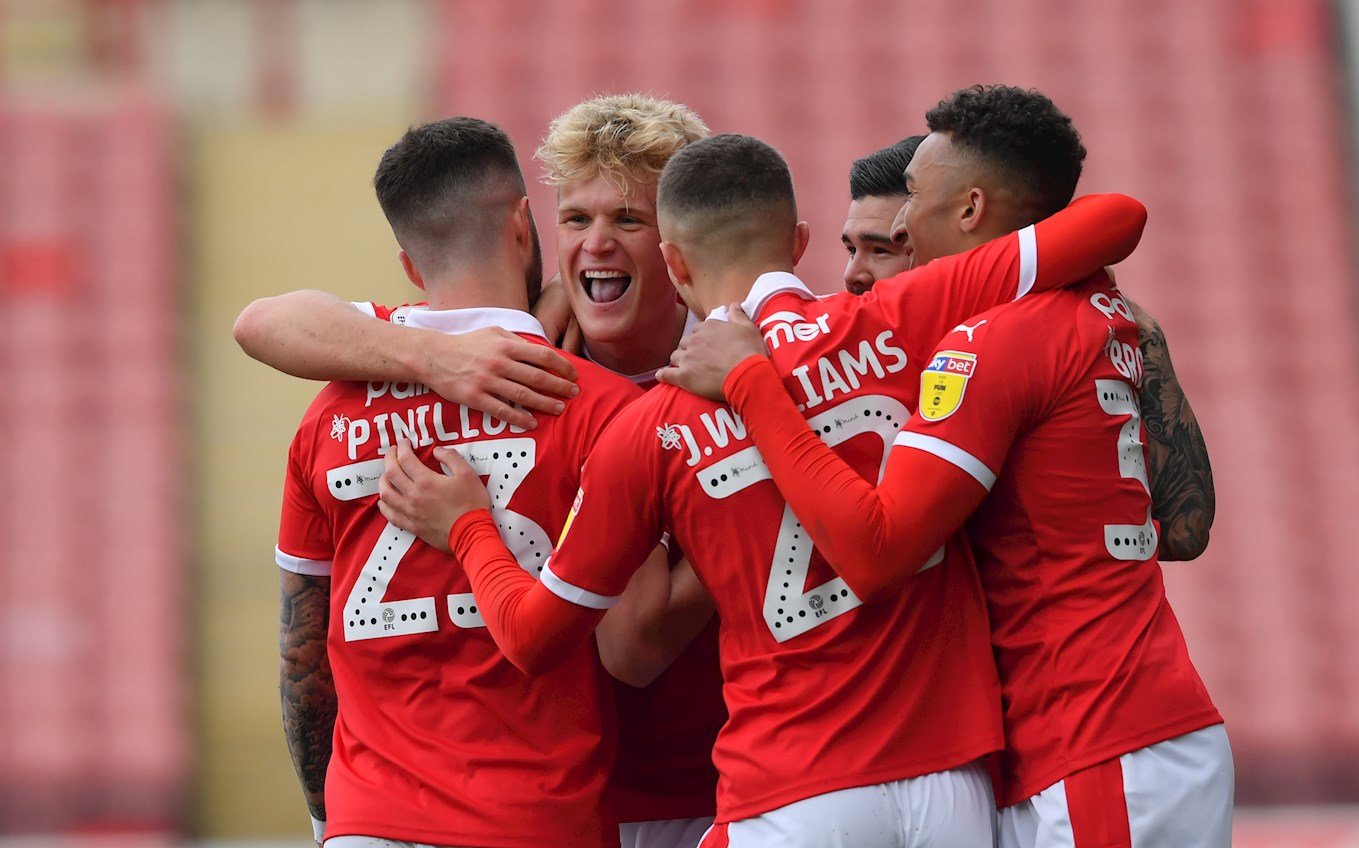 It leaves Daniel Stendel's side two points above both Sunderland and Portsmouth but both clubs still have a game extra to play, meaning the Reds' fate still remains out of their own hands.

But another victory in this game against a Shrewsbury outfit who are still looking over their shoulders in this season's crazy battle to survive would be another positive step forward for Barnsley.

Other than long-term injury absentee, Kenny Dougall, the Reds look likely to have a fully-fit squad available on Friday.

Central defender Liam Lindsay sat out the Fleetwood victory after picking up a knock in training last Friday but has been involved in the latter part of this week so may return to contention.

Reds coach Dale Tonge and club captain, Adam Davies spoke to the press in midweek and you can watch both of their pre-match press conference videos over on iFollow Barnsley.

Following last season’s playoff heartache, many tipped Shrewsbury Town for another top-six push this time around under the guidance of John Askey, who arrived at the Montgomery Waters Meadow from Macclesfield Town in the summer. His tenure, however, was short lived and the 54-year-old was sacked with the Shrews 18th in Sky Bet League One.

Things are a little rosier now in Shropshire, with the club currently 13th in the table after last weekend’s 2-0 triumph at Gillingham. At this stage of a normal campaign, it would be suggested that Shrewsbury could relax heading into the final four games. Not this time around. Sam Rickett’s side are just six points above the drop zone in one of the closely contested relegation scraps in recent memory. 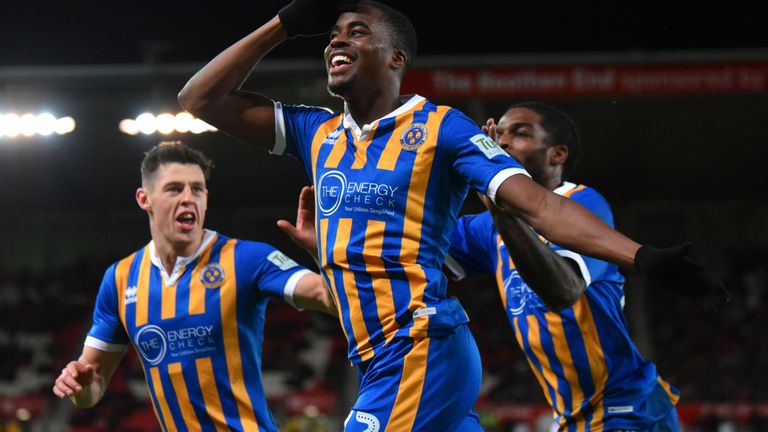 The Shrews picked up an impressive win over Barnsley back in October – only their third League One victory of the campaign, back then. Greg Docherty, Oliver Norburn and Luke Waterfall were on target that evening – with all three amongst the club’s top scorers.

Fejiri Okenabirhie leads the way in that particular stat with nine goals in the league and 15 in all competitions – last finding the net against Southend United at the end of March.

Shrewsbury won on their last visit to Barnsley in September of 2015 but, prior to that, had only picked up maximum points at Oakwell once before during an Old Third Division clash back in 1971.

We will have LIVE coverage of the match over on iFollow Barnsley with club commentator, Matt Bailey on air from just before kick-off.


All the relevant turnstile, ticketing and car parking information ahead of the Shrewsbury Town fixture.

We're All Set For The Junior Takeover

What's On In The Family Zone This Friday? 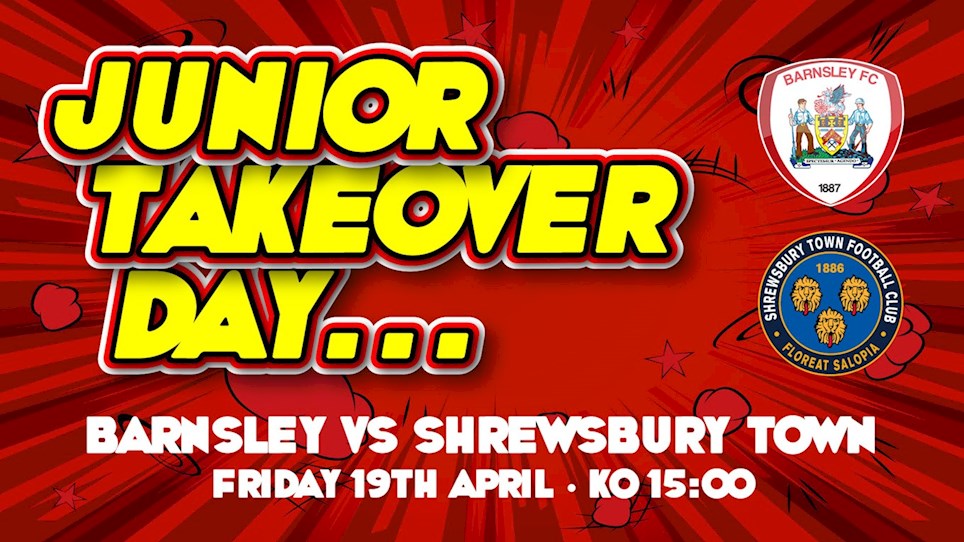 The Reds kicked off a crucial Easter weekend in the perfect fashion, edging out the Shrews at a red-hot Oakwell to maintain their position in the second automatic promotion spot in Sky Bet League One.

Goals in either half from Alex Mowatt and Jacob Brown helped the Reds to an enormously important victory as the race for the Championship enters the final furlong.

Head Coach, Daniel Stendel had named an unchanged starting XI for this one, with the most notable change being that of the inclusion of Kieffer Moore amongst his substitutes; the big striker back involved after two months out injured.

But it was the visitors who began the game the brightest, and after a mere three minutes Barnsley were indebted to their skipper for keeping the game goalless.

Tyrese Campbell played in Shaun Whalley for Shrewsbury, but Adam Davies came out fast to block the shot and the Reds escaped.

Stendel's men weren't showing enough in the final third but they did edge ahead on 23 minutes when Mowatt took it upon himself to try his luck and alter his sides' fortunes. With his right foot he bent home a superb effort from all of 25-yards giving away 'keeper Jonathan Mitchell no chance.

That spurred the visitors on and after Greg Docherty flashed an effort wide, on 37 minutes Campbell hit a ball sweet as a nut first time, and it flew in low and true beyond the strectching hand of Davies.

Straight after the break and the visitors nearly went in front when former Barnsley academy player Luke Waterfall headed towards goal at the far post but it bounced off the ground and onto the roof of the net.

Two minutes later and another let-off as Campbell's volley flashed an inch or so wide well-placed.

Barnsley rallied and Cameron McGeehan rattled the crossbar with a rocket from just inside the area but then two minutes later, the renewed vigour paid off as a flowing Reds move culminated in a cracking finish by Brown at the near post.

The 64th minute saw the introduction of Moore, to an amazing ovation from three sides of Oakwell. He replaced Mike Bähre who'd set up Brown's goal.

Mowatt dribbled beyond a handful of defenders before curling an effort towards the top corner but a deflection saw it fall just wide of the post.

With just over 10 minutes remaining Davies produced an outstanding one-handed save to claw away a Scott Golbourne effort that look destined for the top corner. The ex-Red couldn't believe it didn't go in.

There were sub appearances for Ryan Hedges and Callum Styles and both were involved in the Reds retaining possession and seeing out the win for a huge three points.


All the relevant turnstile, ticketing and car parking information ahead of the Shrewsbury Town fixture.

We're All Set For The Junior Takeover

What's On In The Family Zone This Friday?

Kids tickets are only £1 as Shrewsbury Town visit Oakwell on Good Friday.

Barnsley welcome Shrewsbury Town to Oakwell in Sky Bet League One later this month (Friday 19th April) and supporters under 19 years old are eligable for £1 tickets. Please note, all children under 12 must be accompanied by a responsible Adult.

This fixture is also our designated 'Junior Takeover Day', as a number of  junior supporters are given a unique opportunity to work alongside their heroes for the day.

All participants will be given a special 'Junior Takeover' t-shirt and a certificate of participation once the specific task has been completed.

To stand a chance of taking part, please fill in the following form and select a role*. The Club will be in touch once they have reviewed every application.

Please ensure that you purchase tickets in advance, as the offer ends on Thursday 18th April!

-> £1 tickets are only available to pre-match purchasers.

-> Under 12's must be accompanied by a responsible Adult.

-> This offer will not be valid on matchday (19th April). Normal ticket prices will apply on the day of the game.