Barnsley slumped to a seventh-straight defeat in the Sky Bet Championship, with Bristol City winning on home soil for the first time since January.

An Andreas Weimann brace in the first half at Ashton Gate was enough to see off a spirited Reds side who'd taken a lead through Aaron Leya Iseka, but despite throwing the kitchen sink at the Robins after the interval, it wasn't enough and for a seventh matchday running, we leave empty-handed.

It had been a bright start to proceedings for Markus Schopp's men who were on the front foot from the off, with Jordan Williams proving to be a real thorn in the Robins' side as he rampaged down the left flank.

The 22-year-old tried a long-range effort that barely troubled hosts' 'keeper Dan Bentley, before Michał Helik had to be smart to get a foot in and deny the lively Nahki Wells on the edge of the Reds box.

Tyreeq Bakinson tried his luck from range for Bristol City, but the dipping effort cleared the crossbar of Brad Collins' goal, and it was the Reds who looked the more likely to open the scoring in the first half.

A flowing move in midfield involving Jasper Moon and Callum Brittain saw the ball worked wide for Williams on the left and from just inside the box, the wingback fired in a low shot that Bentley turned behind at his near post.

But the goal did come on 28 minutes, and it was well worked from the right flank. A quick throw-in from Brittain released Cauley Woodrow and the skipper's deft volley was perfectly weighted for the onrushing Devante Cole to take in his stride, entering the box and he pulled it back for Leya Iseka who crashed home from six yards out through a couple of sliding challenges.

Woodrow then teed up Brittain for a 20-yard strike that stung the hands of Bentley who could only parry the ball away, as the Reds' pressure ramped up after taking the lead. But the tide turned in the space of five minutes or so, with the Barnsley high-line punished twice in quick succession.

Some neat interplay around 30 yards from goal between Chris Martin and Wells saw Weimann through one-on-one against the outcoming Collins, and the Austrian striker made no mistake, blasting the ball into the far corner to level up the game five minutes before the break.

Heading into stoppage time, ex-Red Matty James saw a fierce effort from the edge of the box saved well low down by Collins, with Moon diverting the rebound behind with Wells waiting to pounce. But the Robins took the lead in first half stoppage time, and it was that man Weimann once again.

A simple ball in behind the Reds defence on the Robins' left saw Martin in space and he cut back for the waiting Weimann who side-footed the home side in front heading into the interval.

Schopp replaced the ineffective Claudio Gomes during the break with the returning Josh Benson, and the former Burnley man was instrumental in the second half as Barnsley looked to fight their way back into the game.

On the hour-mark, it was hard to understand how the ball stayed out of the Bristol City goal as from Benson's corner, the ball pinged around and eventually fell for Helik whose shot rattled against the underside of the bar before Moon's follow-up was cleared off the line by Martin.

Williams sprinted the length of the pitch to feed Cole wide left and the forward's inviting low cross was met perfectly by Benson, a diving header that somehow Bentley kept out with a combination of knee and boot.

Woodrow was soon certain to get the ball 12 yards from goal only for Robins' defender Rob Atkinson to thwart him using his hand, but referee Thomas Bramall mustn't have seen it, and the hosts got away with one.

A bending effort from Cole flew a yard over the bar, Williams saw another shot claimed by Bentley as the Reds kept hammering on the door of the City defence.

Into added time at the end of the game and Benson picked out Brittain at the far post, he headed back across the face of goal and Cole was bundled over by Tomas Kalas on the goalline, with the ball somehow coming off the striker and going out and over the crossbar.

The Reds gave it everything at Ashton Gate, but once again they fell to defeat and the league table after a third of the season makes for grim reading, with Barnsley 23rd in the Championship and without a win since August. 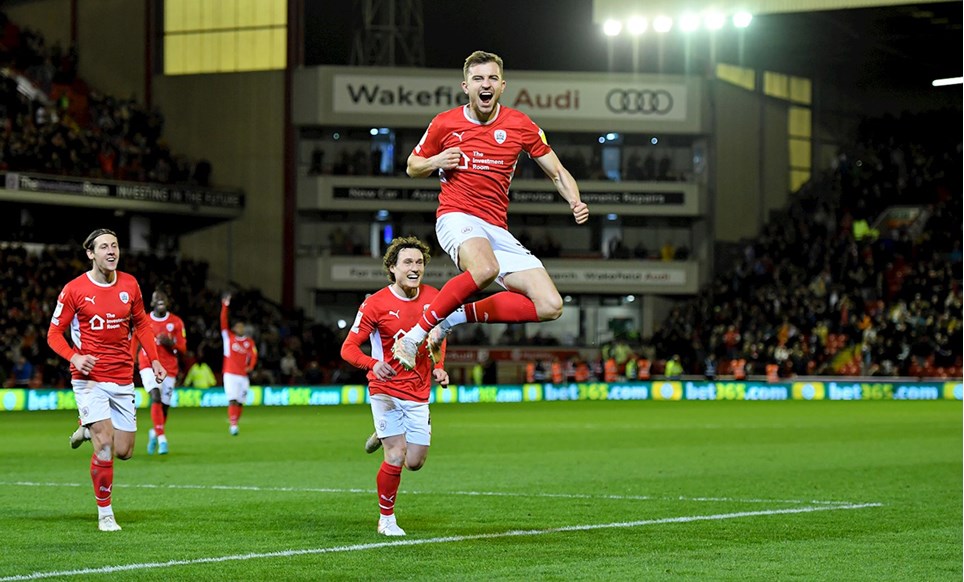