A second half strike from David Bremang secured victory for Martin Devaney’s young Reds against Peterborough United in the Professional Development League on Friday afternoon.

It was a deserved win for our U23s, who created more than their hosts and could have added to their tally in a fine performance on the road.

The score remained goalless at the break, despite Barnsley having the better of the chances.

However, shortly after the interval, Bremang received the ball inside the area and, on the swivel, finished past the Posh ‘keeper.

The Reds almost found themselves in the ascendency after just 20 seconds, when Bremang broke through on the right and squared the ball to Jack Sherlock in the centre, who fired straight at the 'keeper.

Peterborough began to grow into the game and came close on 28 minutes. A shot from the left-hand side looked menacing, but Jordan Helliwell blocked the shot on the edge of the area. The subsequent deflection changed the whole direction of the ball, but thankfully it nestled into the side netting of Archie Brown’s goal.

Will Hondermarck, in what would be a common theme throughout the afternoon, strode through the midfield and played in Sherlock who was in space on the left. The forward fizzed the ball into the middle where Aiden Marsh nipped in ahead of the defender, but saw his prodded effort well saved.

The hosts had the final chance of the half, after an attacker found space on the left flank and drove into the box. The attempt was fired low from close range, but Brown saved well with his feet to keep the scores level.

Following his first start after returning from injury, Marsh was replaced by Thomas Kalinauskas at the interval.

Akin to the opening few minutes of the game, the Reds found themselves presented with an excellent opportunity to score, except this time it was converted.

The substitute Kalinausakas won the ball high in the Posh half and played it into the feet of Bremang in the box. The in-form striker created space and fired a ferocious strike into the top corner, giving Devaney’s side the lead in the first minute of the second half.

Driving through the midfield once again, Hondermarck played the ball into Bremang. The striker flicked it around the corner for Sherlock, whose effort from range went wide of the post just short of the hour mark.

Kalinauskas was then set through on goal on the counter-attack, with the forward racing down on goal and with only the ‘keeper to beat. The Posh shot stopper did enough to put off the Lithuanian youth international however and kept the Reds’ advantage to one goal.

The game began to open up in the latter stages, with Brown pulling off a stunning save from a long-range Peterborough effort shortly after.

Posh began to apply pressure on the Barnsley goal with the Reds still leading, and almost found a late equaliser after a header from a corner nearly found its way into the back of the net.

However, our youngsters held strong for the remainder of the match and saw out their one goal lead resolutely. 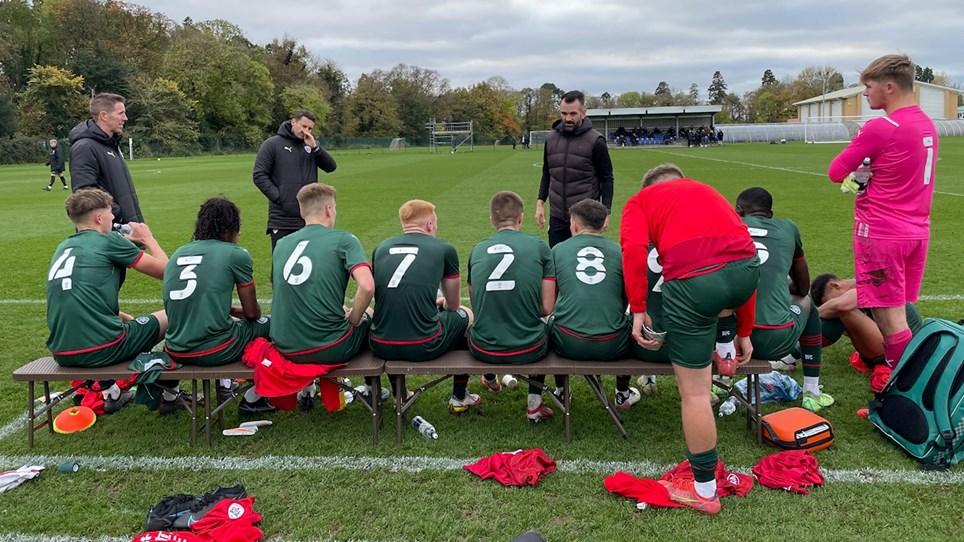