Andre Ayew’s first-half strike proved the difference in a keenly-fought first leg of our Sky Bet Championship play-off semi-final with Swansea City as fans returned to Oakwell for the first time in 14 months.

Roared on by the supporters in the stands, the determined Reds fought hard and for the most part, enjoyed the better of a physical contest, but were undone by a moment of quality from Ayew.

Despite the raucous crowd, the opening exchanges were devoid of any real chances, with Romal Palmer’s off-target effort from the edge of the box the only meaningful attempt.

The cagey start continued for much of the first half, until proceedings spluttered into action when Dominik Frieser’s cross forced Swans ‘keeper Freddie Woodman into a low interception.

Moments later, Cauley Woodrow’s ball in from the same area again required Woodman’s attention, but against the run of play, it was the visitors who took the lead just six minutes before the break.

Having seized possession following Kyle Naughton’s pass down the right flank, Ayew cut inside the box and curled an attempt beyond Brad Collins, with the flag staying down in a tight call.

The Reds came agonisingly close to an immediate response, but Michał Helik’s close-range header was again saved by Woodman as the visitors took their lead into half-time.

Quite what Valérien Ismaël said to his charges at the break will remain a mystery, but it provided the impetus the hosts needed, as they made a flying start to the second half.

Shortly afterwards, and with the hosts hammering on the door, Woodman was again needed to spare his side, as he dived low to his left to claim Woodrow’s free kick from the edge of the box.

For all Barnsley’s high-octane dominance, they were coming up against a brick wall in Woodman and the visiting defence with the Swans’ stopper sweeping up balls over the top.

In the dying stages, Woodrow whipped in a low corner that Morris met with the deftest of flicks but saw his effort agonisingly clip the crossbar.

However, the Reds must take heart from the fact this tie is far from over, and if their dominance in this tie is anything to go by, they stand every chance of fighting back in South Wales on Saturday. 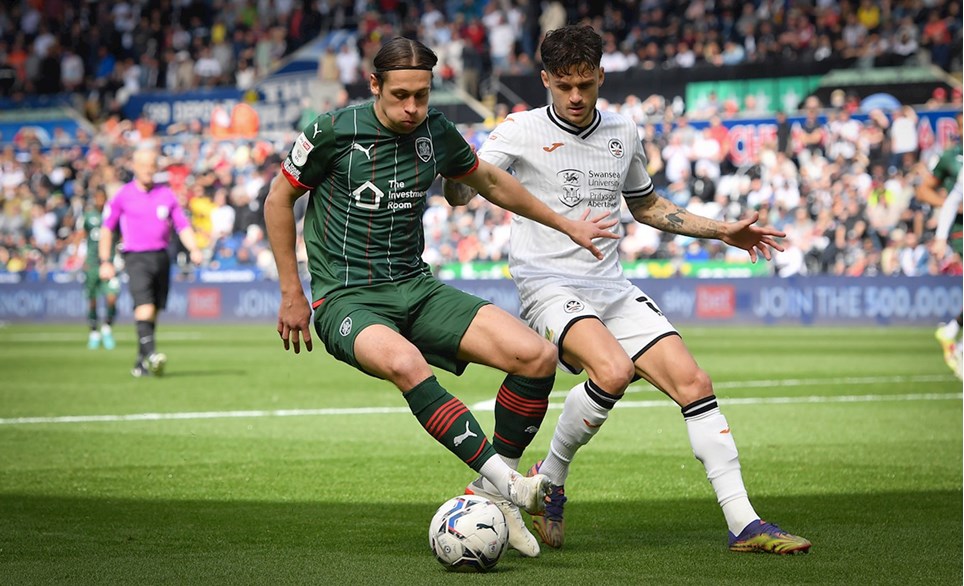