Heading into our Sky Bet Championship play-off semi-final first leg against Swansea City, Valérien Ismaël says there is no pressure on the Reds.

Barnsley have exceeded expectations this term to record an unprecedented fifth place finish by playing a high-octane brand of football that strikes fear into the heart of the opposition, and are looking to end a fairy tale season in the most magical way imaginable.

“Mentally, we are really strong so that’s why I think, on the pitch, we can win but, on paper, we are the clear underdogs because it was not the expectation that Barnsley are where we are. But we are here because of our performance on the pitch.” 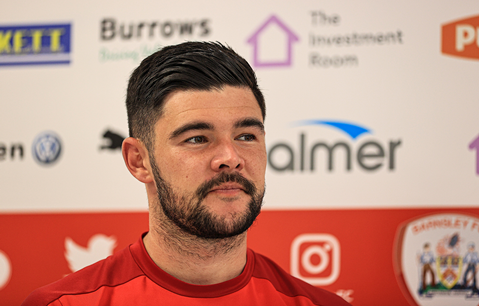 Since arriving at Oakwell in October, Ismaël has guided Barnsley to 23 victories and accumulated 74 points to see us into the second tier play-offs for the first time since 1999/00.

Despite being outsiders, Ismaël insists that the job is far from done and that the Reds are not just here to make up the numbers, and he praised his side’s attitude for their approach throughout the entire campaign to reach this stage.

“It is the reward for the players, they give everything on the pitch,” continued our Head Coach. “From the first minute until the last, they are completely dedicated on our way to play and our principle and it just shows that when you are organised, focused and believe in your strength anything is possible.

“That is the story from Barnsley this season, but the story is not finished.”

The boss looks forward to our Sky Bet Championship Play-Off Semi-Final First Leg against the Swans.