Following our 3-2 victory over Bournemouth on Saturday afternoon, Valérien Ismaël praised the impact of his substitutes during a scintillating second half performance at the Vitality Stadium.

Having trailed 2-1 at the interval, Barnsley brought on Callum Styles, Herbie Kane and Carlton Morris, while Daryl Dike was also introduced midway through the half to devastating effect as the Reds turned the game on its head.

“I think that the bench made a big impact, again,” asserted Ismaël. “Stylesy, Herbie Kane, Carlton Morris and Dike came in and changed the game. Especially Herbie Kane; it was good to see probably the best game he has made so far and it’s important to see that we need all the players.

“We were not happy with the first half. I think, in the first ten minutes, we were not in the game. We conceded two silly and idiotic goals – especially the second one just before half-time – it puts you in a bad position and that’s why we made some changes to give the signal to the guys: we are here to win, to do something, and if we are to lose, we have to show another face, another attitude, and we made it in the second half. 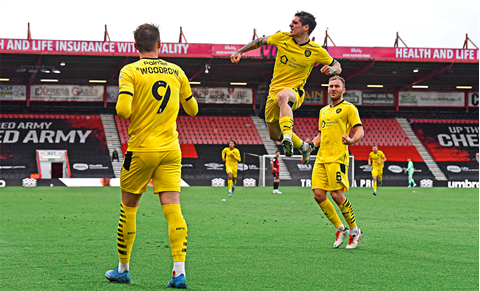 “We keep the momentum going on our side and it’s important. If you’ve got it, you have to keep it.”

It is the second consecutive away outing that Barnsley have scored three goals, having previously put Queens Park Rangers to the sword.

Like in west London, set-pieces proved to be crucial for the Reds who took advantage twice against Bournemouth, but it was the slick passing move for Dominik Frieser’s equaliser that really caught the eye.

“It was a great feeling for the guys to have the possibility to play,” insisted Ismaël. “We have the quality in our team and I think that we need to keep going.

“We can enjoy this; it was a big win but next week we have another big fight in Wycombe and Sheffield Wednesday, and after a break. We just need to keep going and make that effort because it is worth the effort.”

The gaffer's reaction to victory at Dean Court.