Following our 2-1 pre-season friendly victory over Rochdale on Wednesday, Markus Schopp says he is eager to continue the hard work on the training ground as he seeks improvements ahead of the new campaign.

Our Head Coach opted to deploy a 3-4-3 formation at the Crown Oil Arena and implemented a slick passing style as the Reds dominated possession and created several goal scoring opportunities against the Sky Bet League Two side.

“First of all, it was a friendly match with a lot of things we were practicing in the last couple of weeks,” began Schopp. “It was a long time to get on the pitch to play a game and there were many things I was looking for and waiting for responses on the pitch, and I got them.

“There are still so many questions and I guess this is the way it runs; we want to keep on going and there are still a couple of hard weeks in front of us.

“We had two sessions on Tuesday, and you could see in the first and second half that, after 20 or 25 minutes they were struggling a little bit with the intensity. So, there is still a lot to do, a lot of work and we did a good job, but we have a lot to improve.” 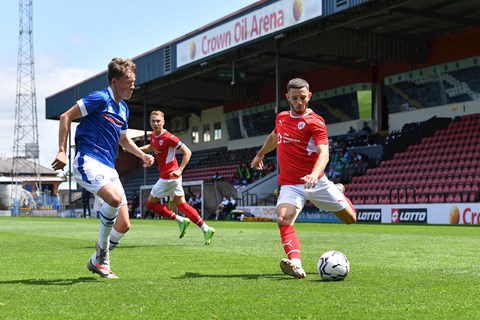 A real positive for Barnsley was valuable game time for players who didn’t feature a lot – if at all – last season, with one even getting on the score sheet.

Liam Kitching added our second as he and Ben Williams came through the encounter unscathed, both featuring for 45 minutes as they build their match sharpness.

“They’re two players who have a lot of potential,” insisted Schopp. “To bring them back on the field is one thing and, of course, they have to give us some answers and they did a good job like all the other guys.

“It’s good to have them and to give them the feeling that they can give us more in the season, and this is important.”