After scoring his first Reds goal in the 2-2 draw against Cardiff City on Wednesday night, Mads Andersen expressed his delight an insists that his side are ready to push on up the league.

The Danish centre-back powered home Dominik Frieser’s sensational cross midway through the first half and his trademark beaming smile was clear to see in the celebrations that followed.

“I can’t describe it,” he exclaimed, speaking exclusively to iFollow Barnsley. “I’m very happy for my goal, but I wanted the win also, even more. It was a good cross and I was there to score.

“Everyone is still hungry; we want to win games and go up higher in the table. The job isn’t done.”

Despite letting a two-goal lead slip, Andersen was keen to echo his Head Coach’s sentiments that Barnsley have made excellent progress since their last clash with the Bluebirds. 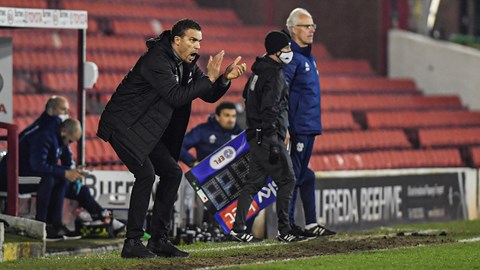 The Reds coped better with Cardiff’s physicality than they did back in November and, on another evening, would have taken all three points from a difficult assignment.

“Compared to the last game [against Cardiff], I think we showed a really good character – from everyone,”asserted the 23-year-old. “We really stepped up, grew up and I think it was really positive.

“It was a bit disappointing not to hold onto the lead, but we stay positive and we have a game in three days.”

Up next is a trip to the City Ground where Nottingham Forest await. Barnsley have won the last three encounters in all competitions and another victory this weekend would put more distance between the Reds and their hosts, who are two points outside the drop zone.

Performances in recent weeks have been encouraging with little reward for Andersen and co, but he remains optimistic of a positive result.

You can watch Mads’ post-match interview exclusively on iFollow Barnsley.

Having scored his first Reds goal, the defender spoke to iFollow Barnsley.