Originally scheduled to feature in our Stoke City edition of Grove Street on Boxing Day, we spoke with Martin Devaney to get his thoughts on how our U23s are faring this season.

What’s your assessment of how the season is going so far?
"In terms of the team, their actual performances have been inconsistent and that’s due to not having a consistent team. So, depending on bodies, it could be under 18s moving up and for the younger players it’s about their development and playing in the under 23s, and it’s been hard to find that consistency in terms of performance. With that, it’s reflected in results.

"But generally, the boys have done OK – certainly in the last three or four games where we’ve found a rhythm to our play, and we’ve been able to work with them; we’ve done quite well, and I’ve been pleased. Within that, there’s been some good performances as individuals – I’ll highlight David Bremang, Jordan Helliwell and Joe Ackroyd, then there’s people who have been doing well like Jack Sherlock and Aiden Marsh, who is starting to get game time. We’ve built him up, slowly but surely and he’s now completed 90 minutes, which is a positive for the club.

"So, hopefully in the New Year, we can keep improving as individuals and try to find some more consistency in the performances. But we know that’s difficult, and we’re not too bothered about results; it’s about seeing players improve in the areas that they’re weak." 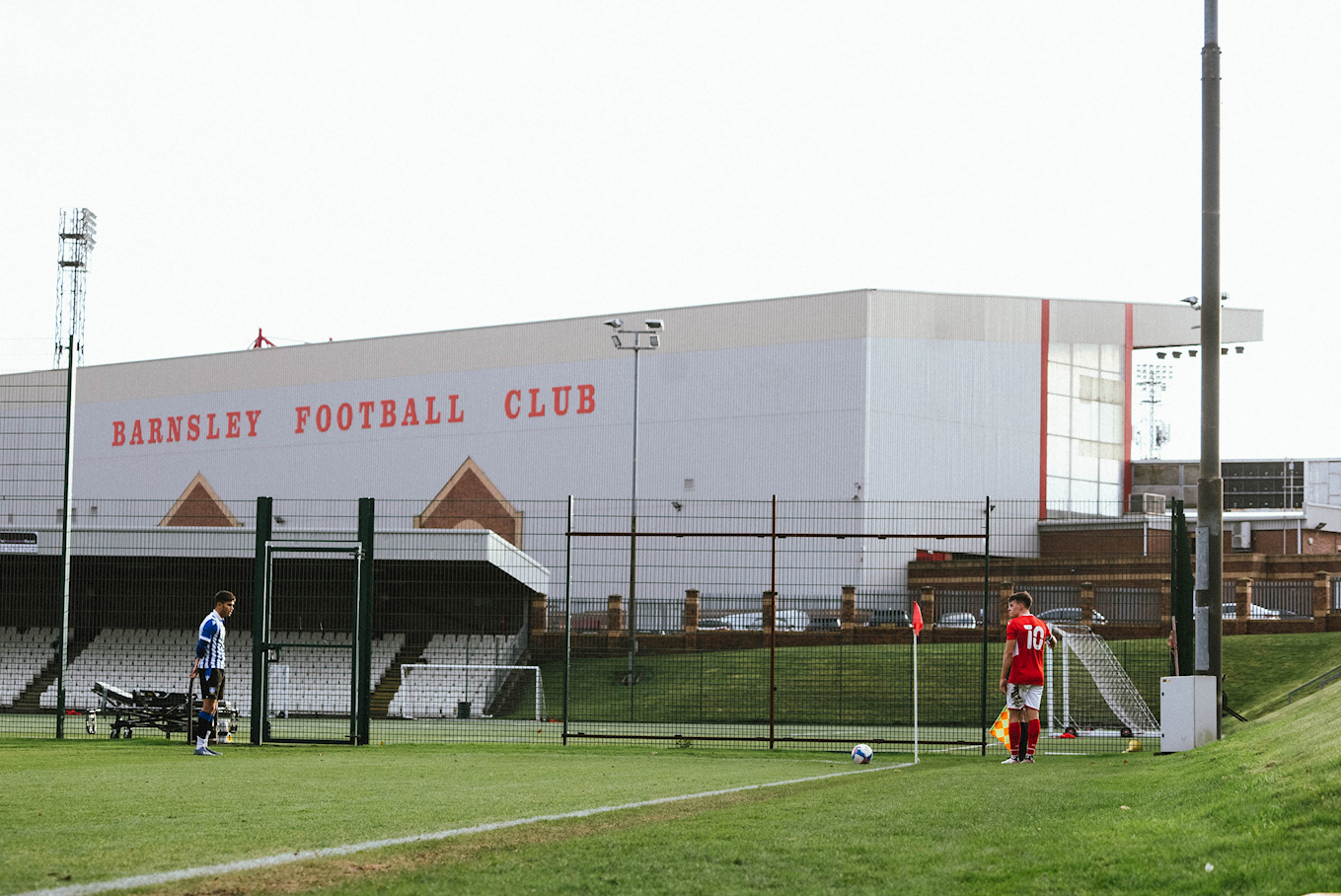 You mentioned not having a settled squad; it’s also a very young squad – as it always is at Barnsley – but it’s good for their development to be playing at this level, isn’t it?
"You’re going to find in young players that they’re inconsistent; that’s probably why they’re not in the first team. They’re good players, first and foremost. They’ve got their strengths and weaknesses, but all the time we’re trying to improve those areas.

"In terms of their development, they are where they are because they haven’t found that consistency – if they did, they’d be in and around the first team knocking on the door more or in that environment challenging those first team players. So, for whatever reason, players develop at different stages. At the moment, some are a little bit below where we want them to be, and some are really knocking on the door to try and get in the first team.

"So, it’s good, competition is healthy and I’m sure in the New Year, because they’re such good kids and lads who want to come in and learn every day. I’m always trying to drive a competitive environment, whether it’s in the gym or on the pitch, and we’re trying to input that into them all the time.

"Generally, it’s been good; we’re fourth in the league, but I’d like to see, from January, consistency in their performances and then for them to challenge to get into the first team environment. Can they train and see how they do in that environment? Some will flourish, others will find it a little bit more difficult, but we’ve just got to bide our time with them – that’s what development football is all about." 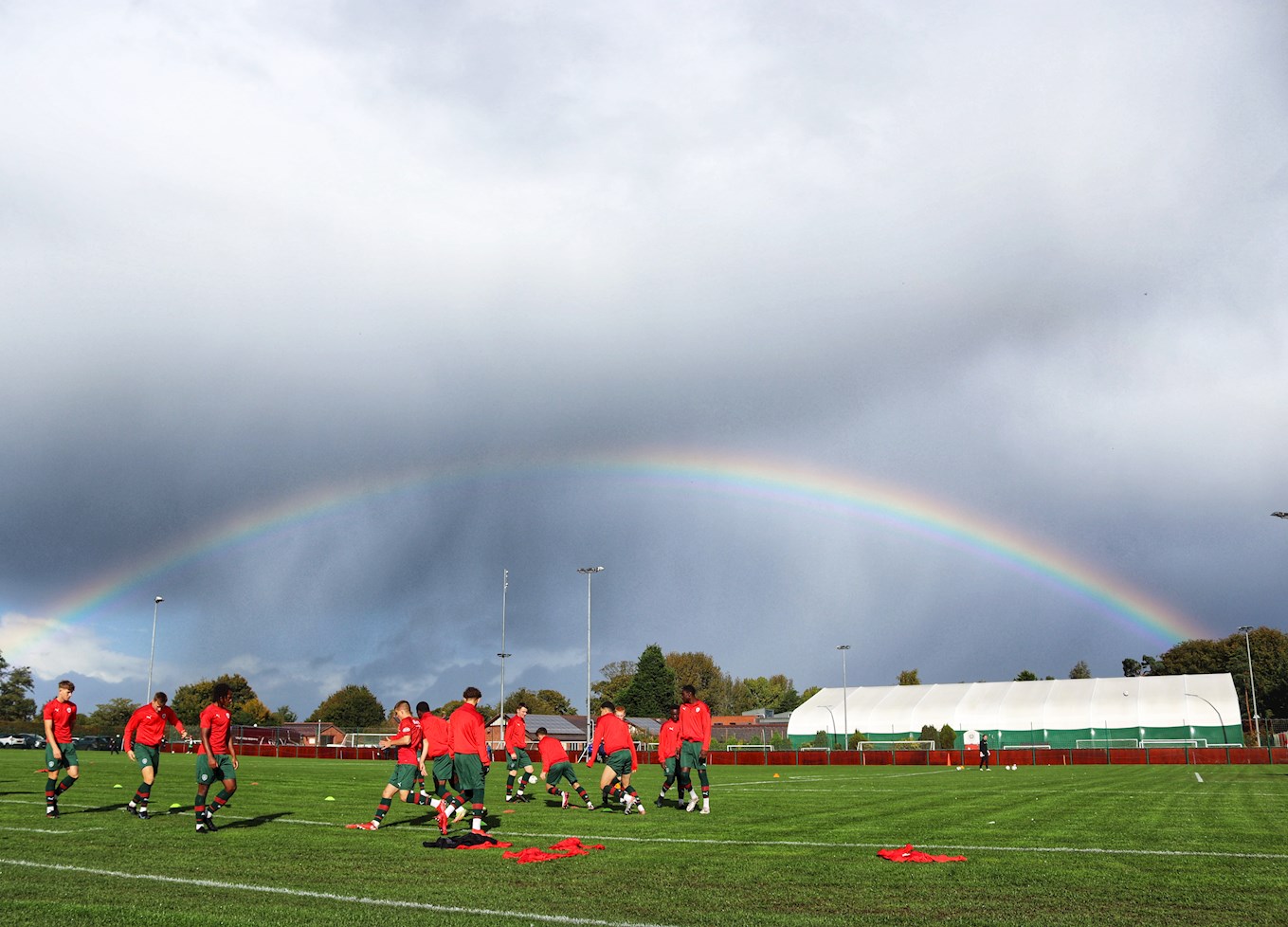 Earlier on in the season, there were a lot of trialists – that’s not the case anymore – does that help in terms of getting a rhythm and understanding between the players?
"I think it just helps the players. The more you train and the more games you play, the better you’ll become, and you can get the rhythm and fitness and build those relationships on the football pitch.

"When you just throw an 11 together – which we have done at times a lot this year – you don’t know what you’re going to get as a coach. But, saying that, they understand our philosophy, they understand our style, they know that we’re a high-pressing team, they know that we’re a counter-pressing team. Working hard is a non-negotiable and we want to get the ball back as quickly as we can.

"On the ball, it can take time to build patterns on the training pitch, but you have to adapt – that’s the environment we’re in – and we’re looking, ultimately, for the ones who can embrace that challenge and just get on with it." 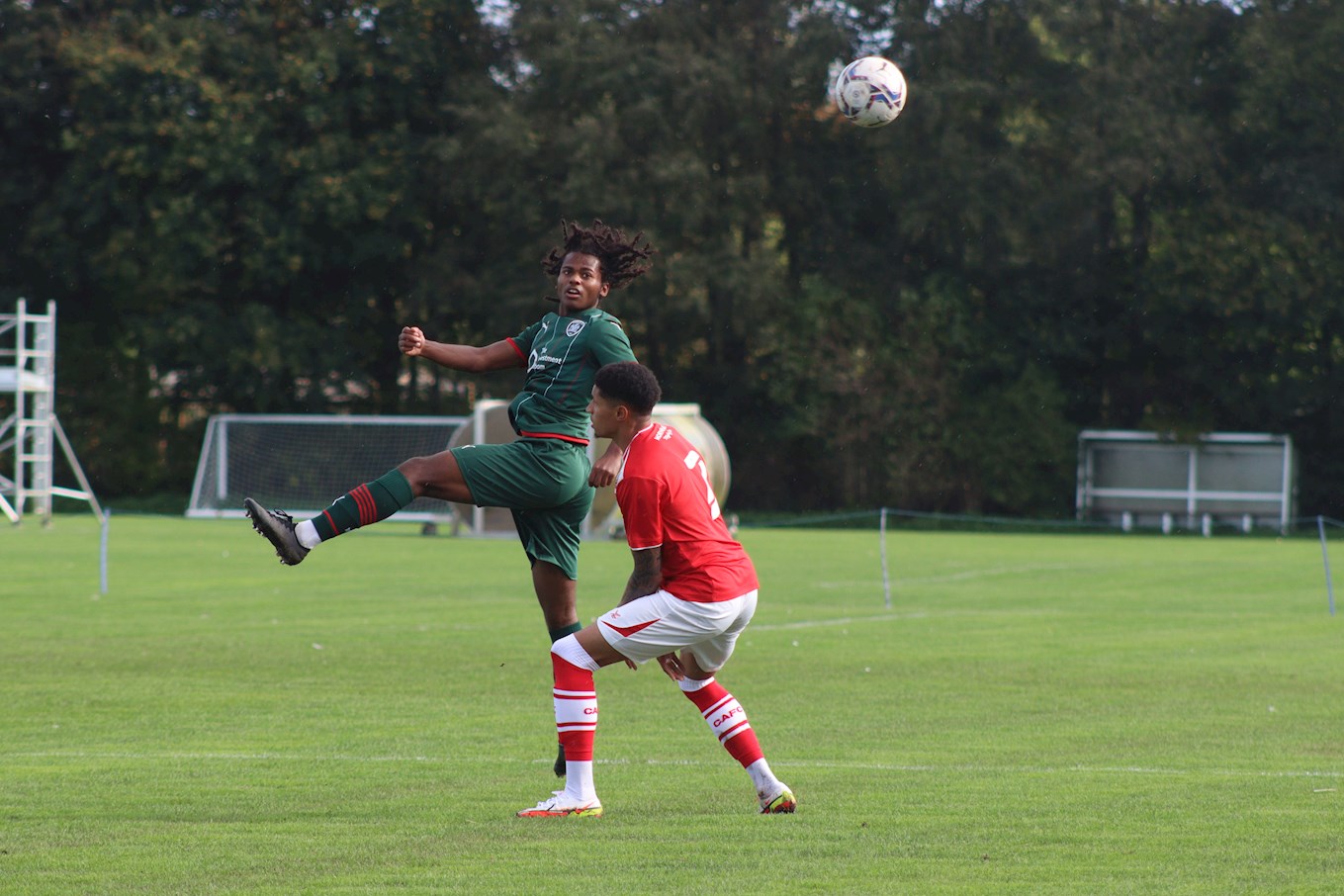 In terms of individuals, are there any who have performed better than you would have expected this season? You obviously set high standards, so is that the benchmark you’re looking for?
"Football is opinions. Some have done really well, but it’s about us as a collective. We all see different things when we watch a football match, and it comes down to consistency. If you’ve got a striker who’s scoring every game – David Bremang has scored four in five, now, so I’d consider him doing really well.

"Other players are working really hard for the team like Joe and Jack – Jack has worked so hard this year; his work rate and desire, what he brings to the team with his directness and running. He hasn’t got many assists or goals, but at least he’s trying to affect in the right way. Ultimately, we want goals and assists for the position that he plays, but we can’t knock his attitude, which is fantastic. That breeds through the team, that character." 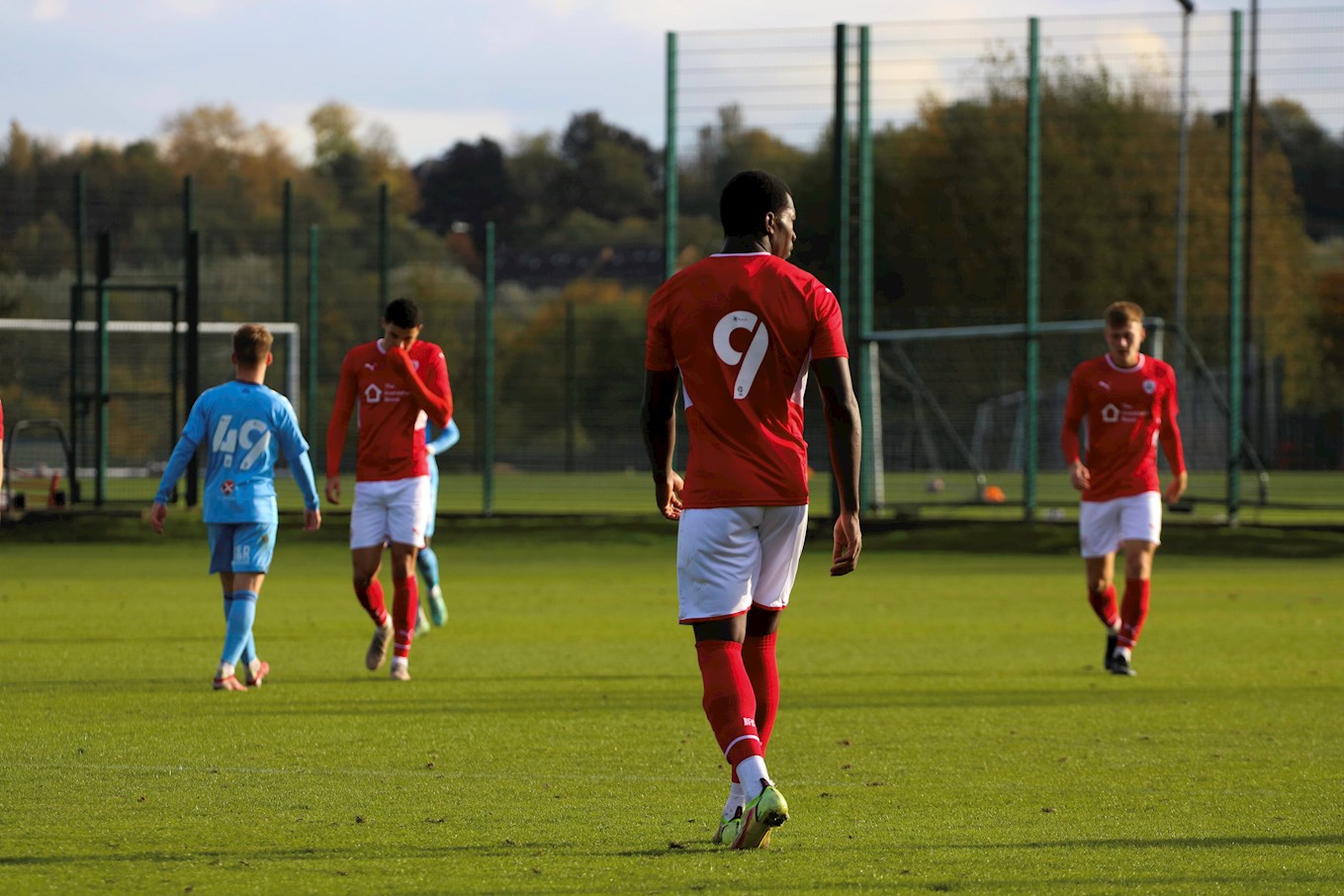 It’s a small squad, too, and you’ve not been helped by injuries. Amir has been out for a long time and Angus is out for the season, how does that impact your plans?
"It’s part and parcel of football; you’re going to have injuries. I don’t stress too much over it – there’s other players who will come in and play. As you’ve seen this year, a lot of under 18s have played and it’s a high level when you’re playing against players aged 21, 22 or 23 and it’s very difficult.

"It’s the physical element, and we understand that, but we go into every game to make sure they’re improving and have that mentality to win. If we fall short on a bit of physicality, we all understand that’s how the game is. Then again, we have some lads who come down and play and they’ve done well.

"We’ve had a couple of lads from the under 16s on the bench, so really, it’s healthy and everyone has done as well as they could have done. This year has been a bit chaotic, but with the under 18s, under 16s and under 23s boys, I think they’ve done really well and the lads who have come down from the first team, their attitudes have been good."

Just on Angus, how is his rehab going?
"Angus had done his ACL and will be another few months, I would have thought. Probably March or April. It’s been really tough for him, but he’s a good person and is working hard in the gym – we’re challenging him not just to strengthen his knee but his all-round body like chest and shoulders – just to get everything a little bit stronger." 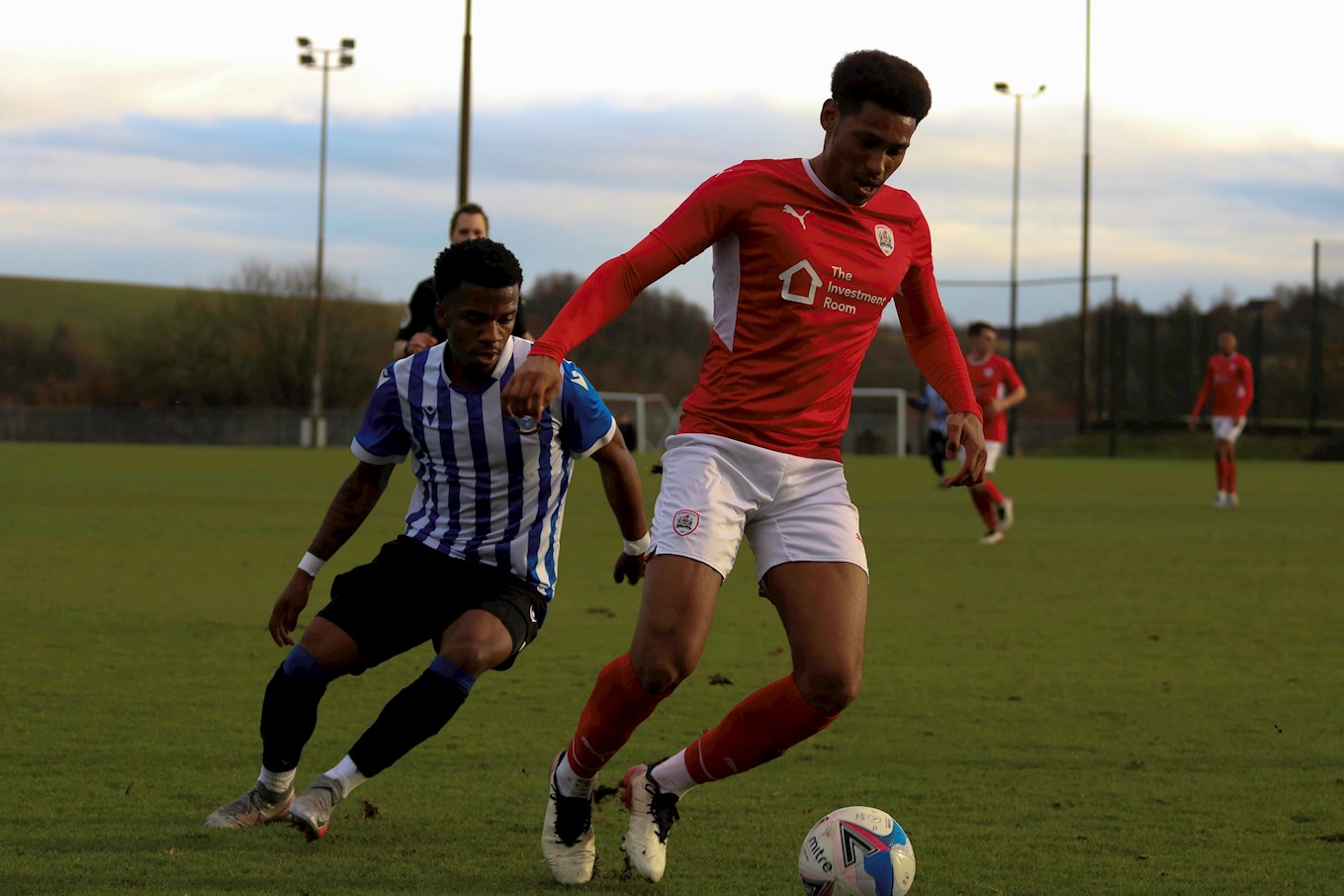 Our new Head Coach was watching your game against Sheffield Wednesday – it was, obviously, very first team heavy and may have been the focus of his attention, but have you had any discussions with him about lads who could be going up and training with the first team?
"Yeah. With Poya and Khaled, we’ve spoken about a plan from January. Discussions are ongoing, but there are a few boys that I’ve highlighted; he’s seen a couple of games now and players he likes that could potentially be training with the first team squad in January.

"That’s good for the boys who have worked so hard that they can be given that opportunity – it’s football and they might surprise you. At a club like Barnsley, that’s what you want." 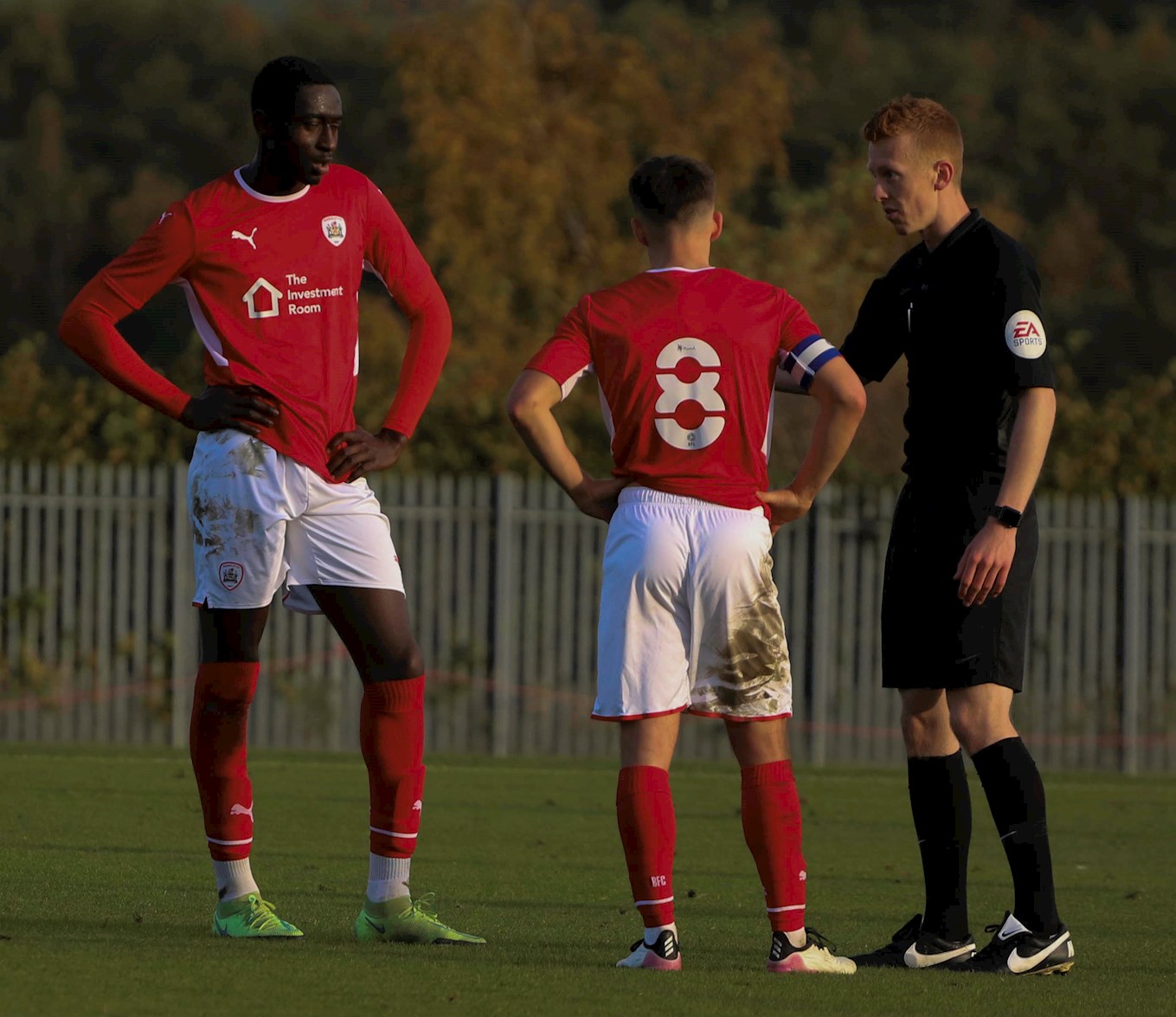 Is that the carrot for them, the added incentive that this Head Coach will give them the opportunity in January?
"I’d say that’s been the case over the years – they’ve been given opportunities, hence why we’ve seen quite a few in the first team making their debuts and being consistent in the last few years.

"You look at Romal, Jasper, Ben and Jack, to name a few, so, with the resources, the players know they get an opportunity and we’re very lucky here that we do have a lot of players here who go and train with the first team. It’s not to make up the numbers, it’s to help with the session.

"So, there’s always that incentive to work hard and do well in games to find that consistency, and hopefully they’ll be given that opportunity." 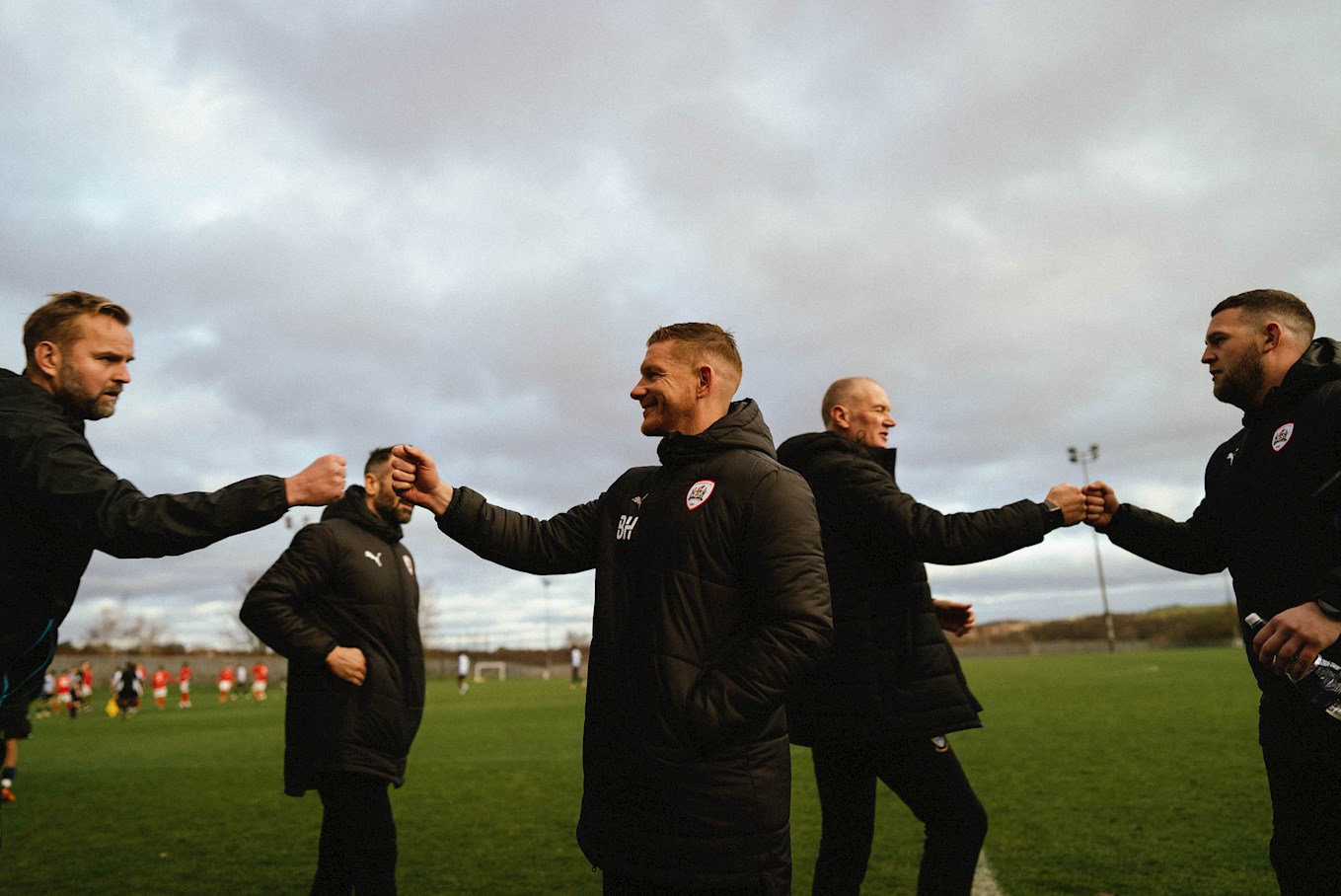 Heading into the second half of the season, what are your hopes, not just as a team but for individuals as well?
"To keep improving. As football players, as I’ve said, to improve their strengths and weaknesses. Keep that hunger, keep that work rate and come in every day to try and improve. You’ll have games where you don’t do too well, but don’t be too down on yourself; try and put it right in the next game.

"Always show good character, always show that desire to win, and if you’ve got those traits, you won’t be too far away or certainly, you’ll play at the level, technically, that your level allows you to. Without that character, mentality and work rate, you won’t have a career."