It's time to approach our upcoming fixture in more detail, with an in-depth look at our opponents in Saturday's Carabao Cup first round tie.

The Reds welcome Nottingham Forest to Oakwell this weekend in the 20/21 season curtain-raiser, just 45 days after securing their second tier status in the most dramatic fashion on a crazy night in West London.

Before we get into this preview, iFollow Barnsley has both pre-match press conference videos available featuring the views of Reds Head Coach, Gerhard Struber and his midfield dynamo Callum Styles.

Subscribers can enjoy both interviews in full by clicking on the linked videos below.

Around six weeks between seasons is unheard of in the modern game and that has presented a host of challenges for clubs to deal with. Kicking the new campaign off by way of a League Cup tie isn't new, but it's the first time since 2012 (the Reds beat Rochdale in extra time at Spotland) that it has happened. And how quirky of fate to pair Barnsley with Forest at Oakwell, considering that was the last fixture played on Grove Street; another drama-filled afternoon in what was the longest of seasons last term.

It's very much 'as you were' for the Reds heading into Saturday. Some might call that unheard of also, especially in recent years such has been the turnaround in players. No, this new season looks set to begin with the same squad of players pretty much. Head Coach, Gerhard Struber is about to embark upon his first full season in charge and whilst one or two fringe players have left for fresh pastures, the Austrian has re-signed Kilian Ludewig - again on loan - and added another player from his homeland to the Barnsley ranks in forward Dominik Frieser. There is a feeling of serenity around Oakwell this summer, but with the games about to come thick and fast once again, all that could change, starting on Saturday at 3pm.

Our visitors this weekend were themselves one of the starring acts of that final-day drama in the Sky Bet Championship. Heading into their game against Stoke City they were looking comfortable in the final playoff position, knowing anything but a big defeat would suffice against the struggling Potters. But Forest imploded on the night, losing 4-1 at the City Ground, then learning Swansea City had leapfrogged them into the final playoff position, by virtue of beating Reading away by the same scoreline. Heartbreaking for the Forest supporters whose dream of returning to the top flight would have to wait for at least another year. It's been 21 years since their fall from the Premier League. Twice European Champions, the Tricky Trees have the fanbase, the squad and finances behind them to surely be in the mix once again this season.

Former French international midfielder Sabri Lamouchi remains in the Forest dugout, having retained the faith of the club's heirachy, although he has brought in a completely new backroom team ahead of the new campaign. Having played for the likes of Monaco, Inter and Marseille in a more-than-decent playing career, the 44-year-old began his coaching journey with the Ivory Coast's national team back in 2012. He guided 'Les Elephants' to the 2014 FIFA World Cup where they bowed out in the group stage with just one victory from three, leaving Sabri to resign shortly after.

A three-year spell in Qatar with El-Jaish came next, where he led the club to silverware in 2016, and winning 50 of his 92 matches in charge before offers from Europe began to tempt him back home. Which came around in 2017 as he took up his next position in his homeland of France, guiding Rennes to a 5th-place finish in Ligue 1, thus a spot in the following season's UEFA Europa League. But poor form the following year saw Lamouchi removed from his post in December of 2018.

His appointment then at the City Ground in June of last year came as a surprise to many, but Forest's form across the season soon won over the fanbase. Known for setting his side out to soak up pressure and utilise the pace and power of their counter-attacking front-players, Lamouchi was rewarded with a new contract this summer, and despite failing on the final day of last season to reach the playoffs, their 7th-placed finish was their best since 2011 and Sabri was the first Forest boss to finish a full season in charge for nine years. Stability at last?

In terms of the Forest squad, they have retained the core from last season, including top goalscorer and the previous campaign's key man in Lewis Grabban. The well-travelled striker fired in 20 goals during 2019/20 and seems to have improved with age. He has genuine competition up there though this season, with Lyle Taylor arriving on a free transfer. The enigmatic forward bagged himself 11 goals in relegated-Charlton colours last term. Another nomadic figure, he's made a habit of scoring goals against the Reds in recent years.

Forest still have their Portugeuse contingent to call upon also, and captain Ben Watson will remain the side's anchor point in midfield, although he too will have useful company for the new campaign, some legs alongside him now in the shape of Jack Colback. Released by Newcastle United having played zero football last term, Jack has played on loan at the City Ground previously so should fit back in seamlessly. And the most recent bit of incoming business was the addition of attacking midfielder Luke Freeman. A bit-part player in the Premier League for Sheffield United last time out, Freeman is a tried and tested operator at this level and another supremely gifted option in Lamouchi's exciting looking 20/21 squad.

The League Cup in its many guises hasn't been a kind competition for Barnsley through the years, with last season a prime example with the Reds dumped out at Oakwell by League Two outfit Carlisle United, 3-0 in the first round. Indeed, we've only been beyond the third round a handful of times, with 1981/82's run to the quarter final our best showing since the competition's inception in 1961.

That isn't the case for our visitors this Saturday. Six-times finalists, four-time winners of the trophy. That was the Brian Clough era in a nutshell for Forest. Finals, trophies and Championships galore, in England and on the continent. Oh how Forest supporters must yearn for days like that again down by the Trent.

Last season they reached the third round before being eliminated by Arsenal 5-0 at the Emirates having previously seen off Fleetwood Town and then big rivals Derby County (3-0) at the City Ground.

Interestingly, this will be the first time Barnsley have met Nottingham Forest in this competition. Also for those who love a good statistical fact, the clubs go into Saturday's cup tie having met each other across all competitions 84 times - one of football's frequent fixtures is this one - and there is nothing to separate the sides. Both hold 31 victories, with another 22 matches ending in draws. So, all to play for! 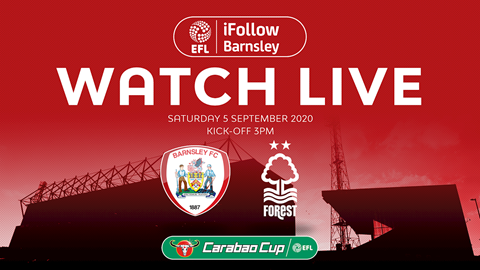 Unfortunately, Reds fans and Forest's alike are still unable to come and watch their side in action as we await further information from the government and relevant authorities. So we continue to play behind-closed-doors for the time being, as we did for the final nine fixtures of 2019/20.

And so the only way for supporters to enjoy the match this Saturday is to purchase an iFollow Barnsley Match Pass. We have an article on that HERE with all the relevant information about matchday streaming for this 3pm kick-off at Oakwell.


Reds supporters in the UK can watch our Carabao Cup first round tie with Forest on iFollow Barnsley for £10.


Ahead of our first competitive fixture of the 20/21 campaign, Gerhard Struber says virtually all of his squad has a clean bill of health.


With the new league season fast approaching, it's time to take a closer look at our opening fixture against Luton Town.