After helping Barnsley keep another clean sheet, Michael Sollbauer heaped praise on his teammates for their tireless work ethic following the 1-0 victory over Watford.

It’s the Reds’ second consecutive shutout since Valérien Ismaël took charge a week ago, and the defensive solidity gives the team something to build on moving forward.

“It’s really good for me, as a defender, to have a second clean sheet in a row,” began the Austrian. “I think, at Oakwell, it’s very hard to score against us and this is also good for the team. 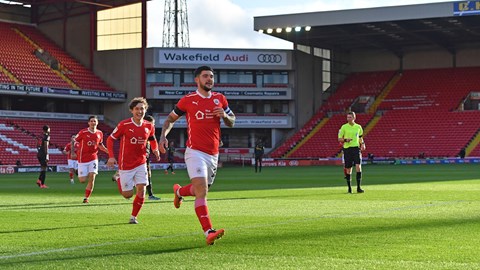 “The most important thing for us now is to know that we don’t have to score two, three or four goals – maybe one is enough, but this is what’s important for the team. We start from the front and played really well against the ball, so it’s much easier for us to defend. In the end, we fought for every ball and cleared every ball.”

Alex Mowatt’s stunning 30-yard drive settled the contest on a blustery day in South Yorkshire as the Reds overcame one of the Sky Bet Championship’s big boys.

The Hornets are amongst the favourites for promotion this season but came unstuck against a determined Barnsley side that are now unbeaten in their last five outings, picking up nine points in the process.

“I think it was a very good team performance to get the three points,” continued Sollbauer. “We did a great job against the ball and, when we won the ball, we tried to play very straight and very deep.

“It was also a fantastic goal from the skipper and I think, in the end, we had a great fight – especially in the second half – really good defending as a team and I think we deserved the three points.”

You can watch Michael’s post-match interview on iFollow Barnsley.

The defender reacts to another fine performance against the visiting Hornets.