Barnsley U18s produced a magnificent late fightback as they came from two goals down to beat Birmingham City 3-2 at the Oakwell Training Ground on Saturday.

Two goals from Brad Binns either side of Will Calligan’s thunderous leveller cancelled out Yoane Zohore’s brace to stretch the young Reds’ winning streak to four games.

In the opening five minutes, the hosts’ high pressing almost caught out the Birmingham defence on a couple of occasions, perhaps providing an indication of what was to come as Tom Harban’s side tried to stamp their authority on the game.

The visitors’ coped well under pressure while Barnsley carved out a number of goalscoring opportunities, Binns notably coming close after latching onto Kareem Hassan-Smith’s brilliant delivery into the box from infield.

Despite the Reds’ dominance, it was City who took the lead midway through the first half, when Zohore picked up a bouncing loose ball and saw Archie Brown off his line to lob into the net.

Immediately following the goal, the game appeared to open up and both sides traded blows by creating chances at both ends. That was before Barnsley stepped on the gas again in search of an equaliser.

Joe Ackroyd, Binns, Connor Hodgson and Jack Birks each came close as chances were made but none taken ahead of the interval.

With 52 minutes on the clock, the Reds continued on the front foot and Ackroyd had the ball in the back of the net at the end of a neat passage of play but celebrations were stopped as the linesman had his flag raised.

Luck didn’t seem to be on Barnsley’s side twenty minutes into the second half as Zohore found himself in on goal again with a similar opportunity to his first goal and, once again, he made no mistake, this time with a less audacious but nevertheless calm finish.

Harban’s team got straight back into the contest when Hassan-Smith won a penalty moments later, which Binns confidently dispatched into the bottom corner

The hosts continued to push forward and eventually found the equaliser their probing play deserved. Birmingham only half-cleared a cross as far as Calligan and the left-back unleashed a rocket from 18-yards that nearly took the roof of the net off.

Barnsley had to weather a late rally as the Blues looked to finish strongly, but, in the dying stages, Ackroyd picked out Binns with a perfect ball into the box and the midfielder headed home from close range to seal a stunning comeback.

Up next for the young Reds is a trip to Burnley, where they will be aiming to continue their assault on the top two in the Professional Development League.


Part one of our in-depth look at the opposition we face this coming season in the Sky Bet Championship. 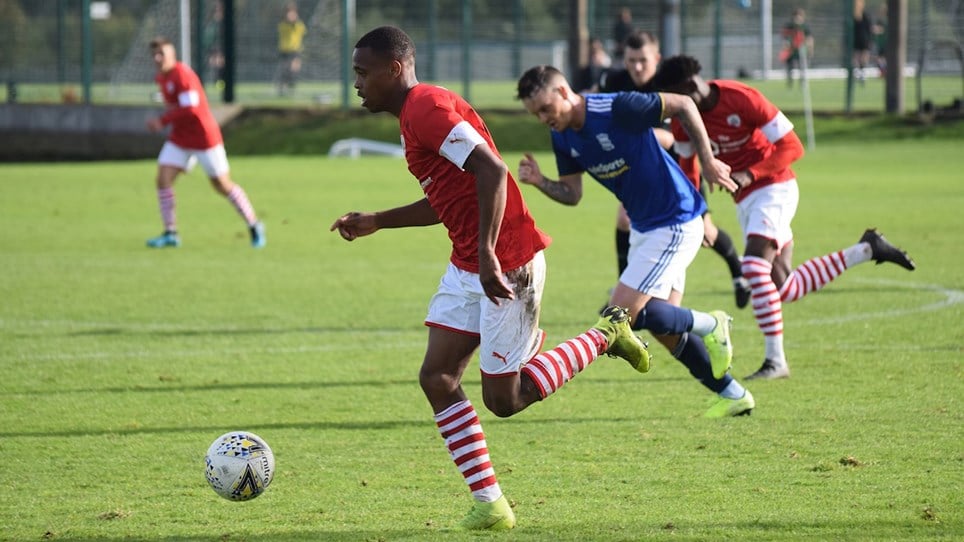 
Barnsley U23s eased to a 5-2 victory over Birmingham City in the Professional Development League on Friday afternoon.


Barnsley U23s travel to Birmingham on Friday afternoon looking to build on their impressive 4-1 victory over Burnley last week.


It's defeat on the road for the Reds in a game turned on its head by red cards.


Barnsley U18s got their 20/21 Professional Development League campaign off to the perfect start with a resounding 4-0 win over Nottingham Forest on Saturday morning.


Sedate Barnsley performance punished by Hatters on a day where nothing went right for the Reds.