Our Austrian central defender gives us his pre-match thoughts heading into what could prove to be a pivotal week for the Reds' survival chances.

Some encouraging performances since the restart have re-energised all associated with Barnsley FC over the last couple of weeks.

Defensive shut-outs have proven vital, with Michael Sollbauer credited massively, for his commanding nature at the heart of a young Reds backline.

'Sole' began his pre-match presser by acknowledging the impressive start, telling us this was the clear focus and strategy going into this nine-game 'mini-season' post-lockdown.

He said: "It's been very important for the whole team, three clean sheets after the restart.

"It might be easy to say this after the event, but that was our goal coming out of the lockdown - to keep clean sheets, to have that defensive solidity, that platform to build from.

"That starts from the front.

"We have good players and we know we can threaten any side with our forward play but as a team we have to defend first and foremost.

"Now we look for a fourth clean sheet in a row and another positive result." 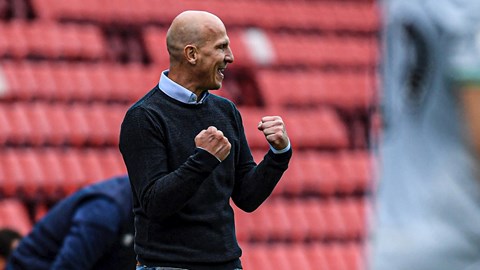 The emergence of a renewed and more confident Mads Andersen has been one of the key talking points since the Reds' return to action.

Having experienced some tough times in his start to life at Oakwell, the Dane is now proving to be a key player in the fight for Championship safety.

Sollbauer told us that he too has had testing times in his career, and can therefore understand what his defensive partner is going through, admitting that it's possible that those tough periods can help a player in the long run.

"It's like in life generally, you learn through experience." Michael explained.

"In my old club there was a period where I was taken out of the team as I'd been struggling and I was out for over a month. I used that time for reflection, I had a clear mindset and chose to work hard to get back in, with the support of my family and friends, the staff around me.

"Then after a winter break I got back in. But I look back at that time as key in my development, and my later improvement as a player and a person.

"It is important that we go through these times, they shape us and I know Mads has gone through similar times and now he's playing like the player he can be, the best that he can be and I'm proud of him and know he's going to be a big player for us in the next games."

Such has been the impressive run of form for Barnsley, the chance to potentially jump out of the bottom three with five games remaining adds extra motivation to the Reds' squad.

But it doesn't add any burden of pressure, according to our 30-year-old leader.

"I will not put extra pressure on my teammates." Sollbauer stated, firmly.

"I am here to help my backline, I will lead and take us forward. I know we are a very good squad, we are confident in doing what we need to do, against Stoke and the rest of the opponents. But there is no added pressure, not from me.

"We must stick to our plans, we must keep doing everything we've done in the last three games and then maybe more than that. There's no stepping back.

"So yes, it's our first big chance to do it, and I am convinced and full of trust in my team. We are going there for a big fight, we will give it our all."