The Reds' Head Coach was in a positive frame of mind when speaking ahead of this weekend's massive Sky Bet Championship clash with Wigan Athletic.

Despite the Reds failing to take maximum points on their travels over the last week, and the gap to safety now back at four points, the Barnsley boss spoke confidently when meeting with the press ahead of our penultimate home fixture of the season.

“Everyone is ready, we’re healthy." Struber began.  "We're all set from the fitness side, my players are ready to fight once again this Saturday.

“We have played with big resilience, particularly my central defenders like Sole (Michael Sollbauer) and Mads (Andersen). But they look forward to that, they want the fight. They can perform in every single game. My captain Alex Mowatt can play a special game each time, he’s in a real fighting mood.

“I have full trust in all of my players to give their all for us on Saturday.”

The Reds' gaffer was effusive in his praise for his players following their performance at Luton Town on Tuesday night.

On most occasions, Gerhard stated, that sort of display would garner three points and stands the Reds in good stead, showing a good recovery from the defeat at Stoke last weekend.

He remarked upon the positive mood in camp and referenced complete faith in the plan for the visit of the Latics in Saturday's 3pm kick-off at Oakwell.

“I think we have the right quality in forward areas, I trust my strikers. But it’s a pressurised situation right now and I think that’s shown in the last games.

“I hope Cauley Woodrow, Conor Chaplin and Jacob Brown can do it for us this weekend. I trust in them, and I think Saturday they are going to be ready to show this.

“I have a very good feeling about the game against Wigan.

“We are ahead of them now, we know their situation, but we have a good plan and I’m looking forward to us showing our right face so that we bring a big performance and get a massive result for us and our future." 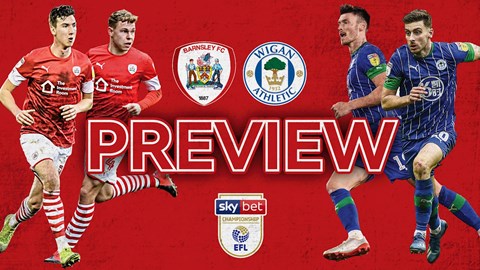 The theme throughout the press conference was positivity and plenty of acknowledgment of the size of the fixture.

Fair to say, Gerhard thinks it's a big one...

"It’s maybe the most important game of the season. We can’t pretend otherwise. But we have the quality.

“A big opponent, a big game, and hopefully a big performance getting us a big win.”

When asked about the troubles for our visitors, owing to administration and all of the subsequent consequences, Struber reminded us of the battles we face ourselves, shifting the focus onto what he thinks is key - what his team can do if they're 'on it' this weekend.

He explained, saying: “We are also fighting for our future, for our careers, for our status in the Championship.

“We know Wigan’s situation like I say, but we have our own battles and motivation.

“If we are on our personal limit, if we find our power source and put in the right display with good balance and great energy, we will have too much for any opponent in this division.

"We have shown this many times.”