2020 began with defeat for the Reds as they were beaten 2-1 by Derby County at Pride Park on Thursday evening.

Despite a first ever professional goal for Elliot Simoes, who struck to level the scoreline early in the second half, Derby were able to find a winning goal courtesy of Martyn Waghorn to take all three points in the first game of 2020.

Head Coach Gerhard Struber made two changes to the starting line-up which drew 0-0 with Swansea City on Sunday as Patrick Schmidt and Mike Bähre replaced Cauley Woodrow and Jacob Brown in attack.

The Reds came into the New Year looking to carry over their fine form from the festive period as they searched for their third win in five games.

As for Derby, they marked the start of their 2020 by handing a debut to Wayne Rooney, who also captained the side at Pride Park.

Barnsley hadn’t previously beaten the Rams in over four league meetings, but they were looking to put an end to that record on Thursday.

However, it was Derby who had the first opportunity ten minutes in when Martyn Waghorn squared for Jack Marriott in the area. The attacker looked to place the ball into the corner of the net but couldn’t hit the target from close range with his side-footed effort.

Marriott was then presented with another chance when he went through one-on-one with Sami Radlinger, but the big Austrian was up to the challenge and spread his body well to make the block.

Barnsley then created an opening of their own and went close a few minutes later when Conor Chaplin found the onrushing Alex Mowatt. However, as the midfielder looked to get his shot away, Ben Hamer raced out of his goal and dived at his feet to take the ball away cleanly.

Marriott, who was heavily involved for Derby for much of the half, came closest to opening the scoring again, as he beat the offside trap and attempted to lob Radlinger five minutes before the break, but he got his chipped effort all wrong and the ball bounced wide of the post.

However, the striker made up for his earlier miss on the stroke of half-time when he nodded past Radlinger from Rooney cross on the left.

As the second half got underway, Matt Clarke hit the post with a free header, before the Reds charged up the other end and made them pay with a smart finish from Simoes.

Jordan Williams latched onto a forward pass down the right, before crossing dangerously into the area. Hamer got to the ball first but could only parry as far as Simoes who fired into the back of the net from close range to make it 1-1 after 50 minutes.

However, the Reds were only back on level-terms for just over five minutes, when Derby’s second goal of the evening was scored by Waghorn and assisted by Andre Wisdom.

Marriott then had another opportunity squandered as he looked to hit a brace. Radlinger rushed off his line to meet the advancing striker before he closed down the angle and made another fine block.

With 20 minutes to go, Waghorn came close to adding third for Derby. A cross from the right fell kindly to him at the back post, but he snatched at the shot and smashed the ball into the side-netting.

Chaplin almost restored parity again with 85 minutes on the clock. Good work by Luke Thomas in midfield presented an opening for Chaplin down the inside right of the box, but as he struck the ball across goal, Hamer beat it away before gathering at the second attempt.

The Reds grew into the game as the second half went on and nearly had another last-minute equaliser as Simoes volleyed towards goal, however his shot took a clear deflection off the arm of Curtis Davies and went behind. But the referee gave nothing.

There were three additional minutes signalled at the end of the ninety, but Derby were able to hold on to secure the win at Pride Park. 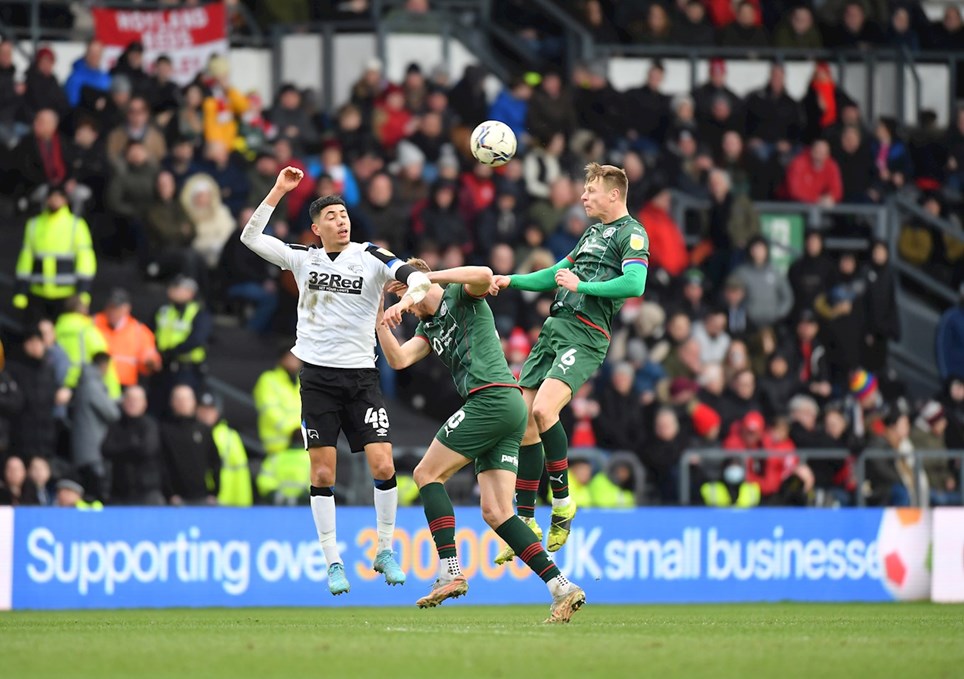