Following our 2-1 defeat against Newcastle United on Saturday afternoon, Gerhard Struber remained in an optimistic mood and insisted that he is confident heading into the new campaign.

Barnsley were arguably the better side, playing an exciting brand of football that we became accustomed to towards the end of last season, and we gave our Premier League hosts a run for their money in the north-east.

“I’m very happy with the boys; we played 55 or 60 minutes on a high level,” began Struber. “Newcastle had a lot of luck with many chances that we have, but this is what we can speak about with the boys, that we must score more goals – especially in the first half. In the second half, in the first ten minutes, we had so many chances to score goals.

“We dominated the game and in one situation we didn’t have the right focus and the opponent took the lead, but I think, in the end, it was a very good test for my boys. Everyone had the chance to show me a good game and I’m very happy with the players – this was the next step in our pre-season.” 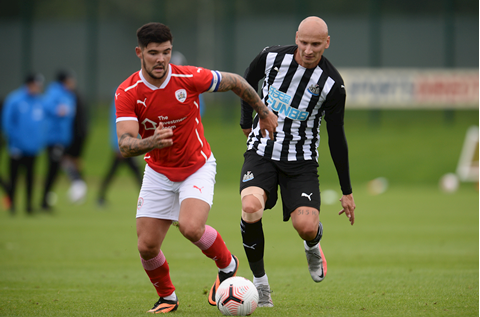 One of the standout performers for the Reds was Callum Styles, who operated from a central midfield position having previously been deployed on the left flank.

His passing was simple and intricate, and, alongside Alex Mowatt, allowed Barnsley to create a number of chances, often leaving the Magpies chasing shadows.

“We always had control on the ball; it wasn’t easy with the wind against us, but we had the ball on the ground and played very quick in the position,” continued Struber.

“Newcastle had a lot of problems with our quick game and forward running. I think we had good timing in our game and control, and I think this was the goal.”

The boss reflects on his side's final outing of pre-season, a 2-1 defeat at Premier League outfit Newcastle United.