Speaking to iFollow Barnsley, the German first gave supporters an update on the health of a few players who've been missing of late.

With Dani Pinillos, Cauley Woodrow, Jacob Brown and most recently Cameron McGeehan rejoining the first team fold, even more members of Daniel Stendel's squad are edging closer to a return to action.

Stern told us: “We’re balancing Bambo Diaby’s workload at the moment. He was with us last week and then we took him back out for a couple of days. But he’s back in training with us again today and tomorrow so he’s in with a chance of appearing this weekend.

“Sami Radlinger is back quite early and he’s out on the training ground with Kevin Pilkington, our Goalkeeper Coach. He’s recovered well and he’ll be back in contention within the next couple of weeks which is quite good because we were initially thinking he’d be out for three or four months.

“In terms of Kenny Dougall he’s getting some game-time with the U23s and he’s getting closer all the time. He’s back in full training and everything is going OK for him right now. So we’re getting players back and this is good for the Gaffer as it’s about options and depth.” 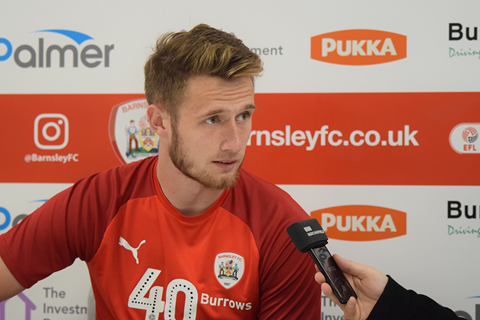 Performances in recent weeks have been positive for Barnsley but they're not getting the rewards in terms of points.

Despite creating plenty of goal-scoring opportunities, particularly in last weekend's 1-0 loss at Nottingham Forest, the Reds are passing them up and Stern explains that it's something that the coaching staff are working hard to improve.

“It’s the simplest way to win points and to win the games," Stern stated.

"But it’s the hardest thing in football, scoring goals. We are aware of the issue but we are working every day, working hard in training to increase our chances of becoming more ruthless in front of goal.

“We’re creating the chances now and I think that was clear in the last two games, particularly against Nottingham (Forest) last weekend. It wasn’t our best start in that one but after half-an-hour, 35 minutes I think we took over the game and played how we wanted to, creating many opportunities but again we didn’t have the quality to score the goals.

“We can only keep on trying and then hopefully things will click for us in front of goal and then we will be on our way and getting the points that these sort of performances deserve.”

Sunday's opponents are not in the greatest of form themselves and are struggling also in front of goal, scoring just one more goal than Barnsley have so far.

Stern is more than aware of the task ahead of the Reds this weekend.

“I think they’re similar to us in terms of their style of play. They like to be positive, they press high up the pitch and try to control the games. And like us they create lots of chances. But also like us they’re struggling right now to find the target and it’s costing them.

“They’re clearly better quality than they’ve shown so far this season and we are expecting a strong Brentford side this Sunday, make no mistake.”

In a game that was initially scheduled for Saturday but pushed back 24 hours for Sky Sports broadcasting, the match kicks off at 1.30pm on Sunday.

When asked if the fact that the game was to be screened on live TV would add extra incentive for the players, Stern insisted that it probably doesn't make a difference although pointed to his side's good form in TV games last season.

“I don’t think it makes it any easier or harder, I don’t think there’s a difference really. It’s still a game of football at the end of the day.

“But I suppose if you look back at last season we had a handful of games on the TV and I think we did quite well, I remember the Luton game here at Oakwell and then being down to 10 men at Southend but winning that one comfortably, so maybe it’s a positive?

“It’s another game and another big test for us and we’re looking forward to it. I think the fans can see that we’re improving and that we are all together as one. The atmosphere in the stands will help drive the lads on and can help us get three points.”