The Reds came from behind to earn a well-deserved 1-1 draw with promotion favourites Swansea City at Oakwell on Saturday afternoon, as the Sky Bet Championship action resumed after the international break.

With Adam Murray, in caretaker charge, he named Kenny Dougall in the starting line-up, as the midfielder marked his return from injury following a broken leg last season. Central defender Bambo Diaby also came back into the side as he replaced Ben Williams, with the Reds operating with wing-backs in this one.

The Reds hadn’t beaten Swansea in any of their past meetings in the Championship prior to today, but Adam Murray’s side did look promising from the outset, as they searched for their first win since the opening day of the season.

Cauley Woodrow drew a decent save from Freddie Woodman inside five minutes, before Jacob Brown cut in from the left flank and shot just past the post.

Woodrow again looked dangerous up front for the Reds, as he forced Woodman into another good save down in his left corner, but the goalkeeper could only parry as far as the onrushing Cameron McGeehan, who couldn’t quite keep his follow-up effort below the bar.

Alex Mowatt then headed over from a Dimitri Cavaré cross, before Swansea had their first real opportunity of the game 20 minutes in when André Ayew stung the palms of Brad Collins.

McGeehan came inches away from breaking the deadlock after 25 minutes when good link up play between Cavaré and Conor Chaplin created an opportunity for the midfielder to shoot, but his effort landed just wide of the target.

A quiet ten minutes followed as neither side could fathom anymore clear-cut opening before the break.

After the restart, Ayew had a chance for the Swans when he got on the end of a deflected cross by Jake Bidwell. However, as he brought the ball under control, Collins charged off his line to narrow down the angle and block the shot away with his body.

Moments later, up the other end, McGeehan had another big opportunity for Barnsley when he rushed onto the end of a free-flowing move inside the area, but his side-footed shot was blazed over the crossbar.

With an hour played, Sam Surridge saw his one-on-one denied by the left foot of Collins, as the goalkeeper made himself big to prevent the visitors from taking the lead.

Just seconds later, Collins was called into action again when he made a fantastic reaction save from point blank range to block away a Bersant Celina header.

However, despite all of the hard work, the deadlock was finally broken in the 65th minute as goal-line technology intervened and awarded the Swans an opening goal when it deemed Ayew’s header from close range to have crossed the line.

Although, the Reds weren’t behind for long, as Mowatt quickly restored parity just five minutes later when he brilliantly fired home a Chaplin cross from the right.

In an attempt to go on and win the game, Murray handed attacker Elliot Simoes his Barnsley and Sky Bet Championship debut in the 79th minute.

The debutant was then involved in the next Barnsley attack, as he played the ball square for Mowatt, who hit a curling shot from distance which went centimetres over.

In the 89th minute Woodrow nearly gave the Reds all three points when he cut inside from the left and hit a low effort which nestled towards the bottom right corner, however, Woodman got down low to parry it away.

The fourth official then indicated an additional five minutes at the end of the game, but it wasn’t enough time for either side to find a winner at Oakwell. 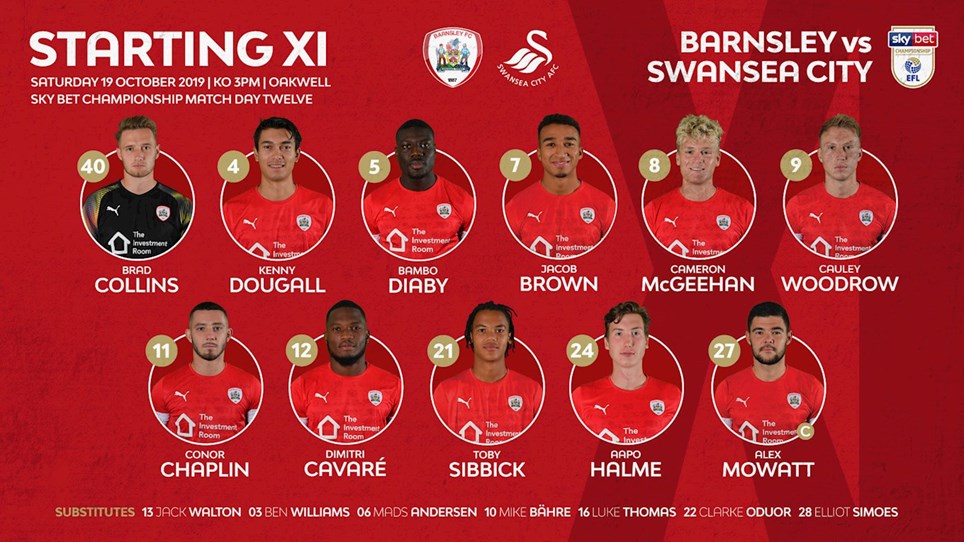 
Here's how the Reds and Swans will be lining up in an hour's time...


The Reds battled against a strong Stoke City side, but were defeated 4-2 in the Sky Bet Championship here at Oakwell.


The Reds bounced back in style with victory over Yorkshire rivals Huddersfield Town in the Sky Bet Championship on Saturday afternoon.