Adam Murray spoke with the assembled media at Oakwell this week to preview the trip to West Bromwich Albion.

Caretaker boss Adam Murray knows the challenge ahead of his Reds side when they pitch up at league-leaders, West Bromwich Albion on Tuesday evening.

It's top against bottom in the Sky Bet Championship in an 8pm kick-off but Murray is adamant that there will be no signs of 'fear' from his players as they look to hand the Baggies a first home defeat of the season.

“Nobody expected us to get anything on Saturday, apart from within our dressing room." Murray told iFollow Barnsley this week.

"You can see the talent in other sides and play with fear, go out there already beaten. But I do not think we are about that and that is not in our make-up. We will go there with structure, but at the same time, go and attack.

"We want to win the game, we will tweak things here and there and have a strategy that's best suited to help get us something from the game.

“No-one is going to expect anything from us at West Brom. But we enjoy ruining parties, so that will be our plan.”

The Reds were more than a match for Swansea City at Oakwell last weekend and on another day they'd have taken all three points from a match they dominated for large spells.

Murray reckons West Brom will be even more of a challenge but reiterated his belief that this is an opportunity to impress in a game the Reds have been given no chance of winning.

As he explained, telling us: “For me, Swansea are good, but these (Albion) are on a different playing field.

“We had a meeting first thing Monday morning and like I said, you can go there with fear and anxiety as they have such good players; Premier League players and they are top of the league.

"But our squad is full of young and hungry players who are energetic and eager. This shouldn't be about the opponents, it's about us and our club, our players and going to the Hawthorns and showing what we're about.

"We're excited about what's ahead." 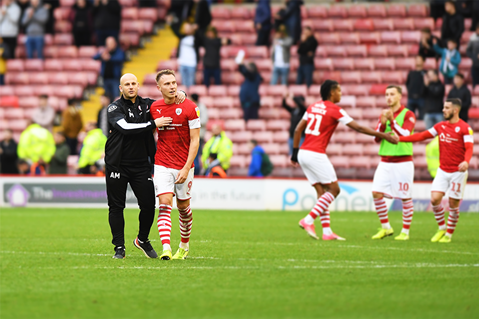 As Sheffield United showed in their match last night against Arsenal, the favourites don't always run out victors against so-called underdogs.

The Blades are led by someone in Chris Wilder that Murray has strong connections with.

“He (Chris Wilder) is probably the best manager I ever played for. Not just in terms of tactical ability and knowledge, but he was a real players' manager.

“He is someone that, even when I was at Mansfield, he would call me out of the blue and offer me a bit of advice and little bit of praise.

“I spoke to him last week; I should have rung him back on Friday, but I forgot! But having people like that around you is amazing to be able to call upon.

“As a young coach, especially in these situations, it is great to have.”