The right back picked up the man of the match award and scored the first of Barnsley’s two goals after a superb through ball from Cauley Woodrow left him one on one with the 'keeper.

Cavaré had no doubt he was going to shoot after receiving the pass: “I was thinking that I had to take the shot on because I saw the keeper running at me with his legs open and this meant I could put the ball through them.” 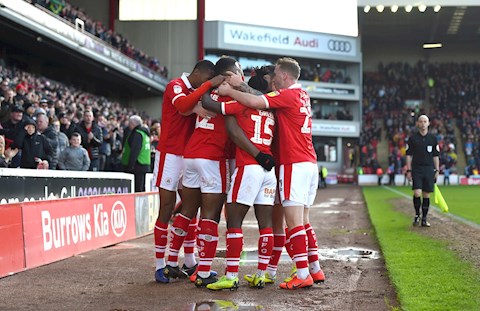 Despite Sunderland’s late equalizer against Wycombe, the Reds have opened up a four-point lead over Tuesday’s opponents and Cavaré believes his side have built up momentum going in to the game: “Whether it’s home or away, we are confident." Dimi stated.

“Everyone is happy with today’s result, we got another win, scored two goals and kept another clean sheet. Sunderland will be a big game on Tuesday, but we will go into it with some real momentum.

"We are confident and together. We are in a good place.”

The Reds were without two crucial players due to suspension. Both Cameron McGeehan and Jacob Brown are serving three-match bans, but the Frenchman believes the squad has enough depth to still pick up results, as Saturday proved.

“Cam (McGeehan) and Jacob (Brown) are both really good players, but everyone in the team knows we are all good enough to step up when we are needed.”

Next up for the Reds is Sunderland at Oakwell on Tuesday night in a clash between two of the division's promotion chasers.