Ahead of our final pre-season friendly before the 2019/20 Sky Bet Championship campaign kicks off, Dale Tonge says the Reds are looking to test themselves against Sheffield United.

Barnsley welcome the Blades to Oakwell on Saturday with both sides having achieved automatic promotion last term, and the Reds’ First Team Coach is relishing the prospect of facing Premier League opposition.

“So, from our point of view, we know it’s going to be a really good test both in possession – can we be good enough to break a now-Premier League team down? – but, out of possession, can we deal not only with their style of play – which is quite unique – but generally with a team with a higher calibre of players? That is the test.” 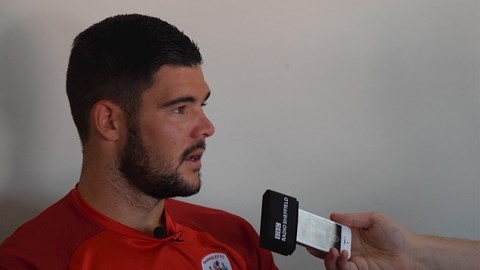 Training camps in France and Germany provided Barnsley with an opportunity to work in a concentrated environment, particularly with nine new faces – in addition to the permanent addition of Mike Bähre – arriving this summer.

It was a productive fortnight for the squad, with victories over SC Toulon, VfL Bochum and DSC Arminia Bielefeld following a routine outing at Stalybridge Celtic prior to departing for Europe.

The new recruits were able to get to grips with Daniel Stendel’s philosophy – one that has proved to be so fruitful during his time with the club – and Tonge insists it’s an identity that the Reds will continue to implement in the Championship.

“I don’t think we’ll change anything tactically,” continued the 34-year-old. “I think how we’ll play will be the same – we all understand that the teams we’re going to be playing against this year are going to be of a much higher calibre; we understood that we were one of the better teams last year. We know that we’ve got to change and adapt in certain games but our style of play won’t change.

“This is why the two away trips were really good to get the boys together and we’ve added Conor Chaplin to that now, and with them all being similar ages – I mentioned this a lot last year – the players have just integrated really well, they’re all really good kids and I think that’s the main thing. Settling into the environment has been easy for them and that’s made our job a lot easier.”

You can watch Dale’s full press conference on iFollow Barnsley.