Alex Mowatt is looking forward to the visit of Sheffield United this weekend in the Reds’ final pre-season friendly ahead of the 2019/20 Sky Bet Championship campaign.

The talismanic midfielder was influential last term as Barnsley secured an immediate return to the second tier, and he is eagerly anticipating the prospect of facing higher calibre opposition.

“They’re the best team that we’re going to play all pre-season – they style that they play is something that I like and I think it’ll be a good challenge for us,” said the 24-year-old. “They’ve got good players and are in the Premier League now, so they’ll want to come here and beat us. It’s a derby game and the fans will enjoy it, so it’ll be a good game.”

Mowatt completed 90 minutes on Saturday as the Reds beat DSC Arminia Bielefeld in their last fixture while out in Germany.

The two training camps this summer have been a good opportunity for players to regain match fitness and our resident ‘screamer specialist’ insists he is feeling sharp ahead of the big kick-off against Fulham next week. 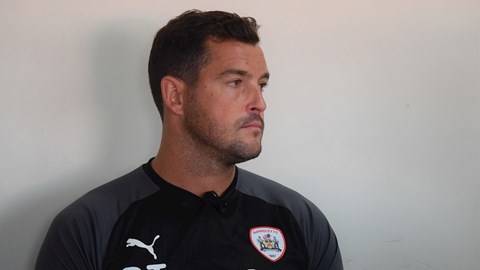 “It’s been tough out in France and Germany with the heat, but I think, with all the new players coming in and them adapting to how we play, it’s been a good pre-season,” continued Mowatt.

“We’ve played quite a few games and I’ve felt fitter in each game so, hopefully I’ll play on Saturday as well and I’ll be fully fit going into the first game of the season.”

There have been plenty of arrivals at Oakwell in the transfer window, with all new players gradually adapting to Daniel Stendel’s philosophy.

Early indications are encouraging as Barnsley have gone from strength to strength in their pre-season outings – particularly while on the continent, where performances have been impressive.

“The way the gaffer wants to play is different to a lot of other managers, so it’s hard for them to get used to, but I think they’ve done well so far,” admitted Mowatt.

“Some of the players who have come in, we didn’t know ourselves because they’ve not played in an English league. But they’ve come in and worked hard in pre-season and done well, so it’ll be good to see them in the Championship.”