The Reds' Head Coach felt that Saturday's big win at Wimbledon was the reward of hard work when he spoke to us post-match.

Barnsley FC Head Coach, Daniel Stendel was naturally delighted to see his charges extend their impressive run of form with another away day triumph.

Saturday's 4-1 drubbing of AFC Wimbledon made it seven games unbeaten and the three points accrued saw the Reds close the gap on the division's automatic promotion spots.

But despite the final scoreline at Kingsmeadow, Stendel admitted that it wasn't as easy as that might suggest.

“I said to the squad at half-time that this was a test for us," he explained.

"You have to work hard to get what you want. But when we went 1-0 in front we were a little bit lazy and we gave away the ball too easily. Wimbledon were better than us at that point, they made it 1-1 and had a chance to take the lead so we had a bit of luck there.

"We needed a reaction in the second half, that's what we told the players, and we scored early and then we had more control and played more like a team at the top of the table.” 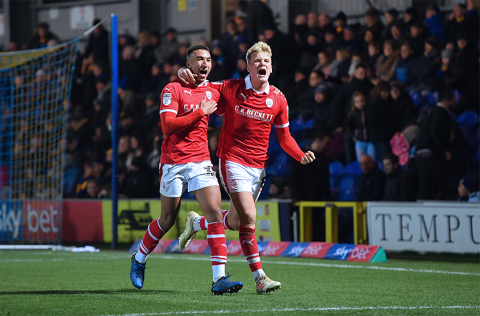 After losing goalscorer Cauley Woodrow to injury in the first half, the Reds' Head Coach didn't replace him with fellow forward Victor Adeboyejo, but instead he introduced another midfielder in Kenny Dougall, altering the shape of the team.

Stendel told us that this was a conscious decision, to try and regain control in the middle of the park as the home side were boosted by their equalising goal.

He said: "We bring on Kenny because we needed to work harder to control the ball in that moment.

"The opposition team were playing well and I think it was the right decision to have another body in the midfield.

"After half time we controlled the game more with our midfield and had more situations to score."

The gaffer finished by thanking the 740 Reds fans who were vociferous as ever in backing their side.

“The fans were very loud in what is a small stadium.

"I always say this after an away game, but this is true, I could only hear our fans.

"We have such brilliant supporters and I am happy that they follow us away because it will help us in achieving our goals.”