Daniel Stendel spoke of the unity amongst players, staff and supporters after Saturday's latest Sky Bet League One victory.

After another fantastic showing on the road from the Reds saw them to a 4-1 triumph over hosts, Gillingham last weekend, Barnsley FC Head Coach, Daniel Stendel was as honest as ever when he spoke to the press post-match.

The Reds went ahead inside 16 seconds when Kieffer Moore slammed home an early goal and Barnsley could have had a few more in an opening spell in which they threatened to dismantle the Gills.

"We went in front in the first minute then we had three big chances but we couldn’t score and then we weren’t so good.

“But, after the second goal just before half time, I thought we would win this game for sure. In the second half, we were more together and we had more chances to score even more than the four.

"My only complaint is I was a little bit angry about the goal which we conceded which was not necessary but we won so it is OK.” 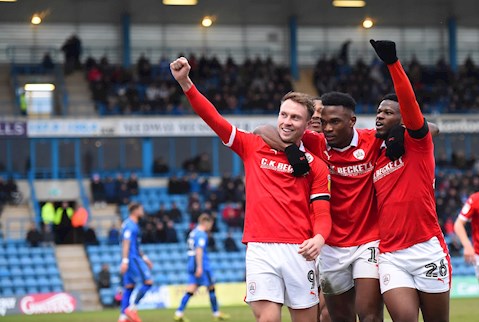 The victory saw the Reds increase the gap to the chasing sides below them. The gaffer is happy with the form of his young side and is confident they will maintain their push for an immediate return to the second tier.

Stendel also spoke of the togetherness amongst his squad, of the teamwork behind-the-scenes where it seems the club is united from players to staff to supporters.

"It doesn’t change our mindset." He stated.

"We want to stay at the top of the table and work hard for our goal of promotion. I think my players can handle the pressure and it is a good experience for us.

"It’s unbelievable the support we get. We have great fans and I am happy that the players can give back a little bit to the fans by winning games.

"Barnsley is not only the players on the pitch, it is the staff, all together and it is the supporters as well.

"We are all together at this club."