The Reds were held to a 1-1 draw under the lights at Oakwell on Wednesday night, as Reading came from behind to rescue a point in the Sky Bet Championship.

Cauley Woodrow put Barnsley ahead early on in the second half, before Lucas João scrambled home with 15 minutes to play.

Head Coach Gerhard Struber made one change to the side following defeat at Cardiff City on Saturday, as the injured Aapo Halme was replaced by Kenny Dougall.

Coming into the game, Reading had the better of this fixture over recent years, entering the match unbeaten in their last four meetings against the Reds.

However, in their bid to make it two wins in a row on home soil, Barnsley started quickly.

Jacob Brown had the opening chance inside five minutes, as he latched onto a pull back by Jordan Williams, but as he looked to curl his effort into the top corner, his shot narrowly missed the target.

Mike Bähre then came close again for the Reds after a quick counter from one end to the other, but the German’s shot from the inside left of the area was well saved by Rafael Cabral in the Reading goal.

Barnsley were turning up the heat in what was a cold winters’ evening at Oakwell, as Alex Mowatt went inches away from giving the Reds the lead, with a low long-range effort that nestled just past the post.

Then, Reading, who had been relatively quiet for 25 minutes, carved out their first opportunity close to the half-hour mark, as former Premier League midfielder Charlie Adam struck a vicious shot from distance, but Sami Radlinger was equal to the challenge and tipped the ball behind for a corner.

However, still, the Reds continued to apply the pressure and were almost rewarded when Chaplin was played though on goal by lovely weighted pass from Woodrow.

The striker got in behind the Reading backline and looked to slot past Cabral, but as he shaped his body to shoot, the goalkeeper closed down the angle and blocked the effort away with his feet, in what proved to be the last piece of action in the first half.

As the game got back underway, Reading started the stronger of two sides. João passed square for Liverpool loanee Ovie Ejaria, however, the midfielder couldn’t keep his shot down, as he blazed over the bar.

Although, it didn’t take long for the Reds to get back into the swing of things and pick up from where they left off.

Mowatt had another shot saved, before a blocked clearance landed in the path of Woodrow on the 57th minute. The striker made no mistake from close-range and confidently placed the ball in the bottom left corner.

Ten minutes later, Adam saw his free-kick on the edge of the area palmed away by Radlinger, before Reading were able to equalise courtesy of João in the 76th minute.

Following the equaliser, the Royals had their tails up, and João again went close from a header shortly after.

Then, with just over five minutes remaining, Ejaria cut inside from the left onto his right foot and shot across the face of goal, but good handling by Radlinger prevented the effort from going in.

The fourth official indicated six minutes of added time, allowing Barnsley one last attack. Substitute Patrick Schmidt raced inside the area, before he shot from a tight angle, which was saved at the near post by Cabral.


Barnsley were beaten 1-0 by Birmingham City in the Sky Bet Championship on Tuesday evening. 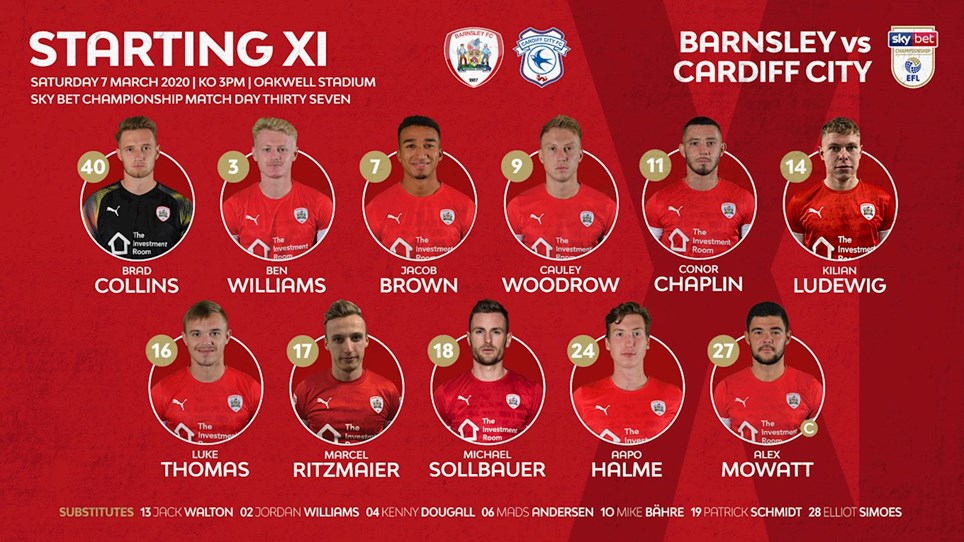 
The two lineups have been revealed as the Reds face the Bluebirds...


It's a bad day at the office for Gerhard Struber and his Reds side, thumped away from home by relegation rivals Stoke City.


It's another terrific result for the Reds as second half Chaplin and Brown goals see Barnsley overcome Blackburn at Oakwell.


The Reds and Lions play out a stalemate in Oakwell's first fixture since the return to play.


A first victory at Queens Park Rangers in 70 years kicks off a spectacular start to the return to play for Gerhard Struber's men.