Ahead of the opening round of fixtures in the Sky Bet Championship, influential midfielder Cameron McGeehan expressed his delight in welcoming Fulham to Oakwell on Saturday; a game which is sure to live long in his memory.

Age nine, McGeehan signed his first ever footballing contract when he joined the academy setup at Craven Cottage.

Fast forward 15 years, and the central midfielder will be lining up against his former club this weekend and insists he couldn’t have wished for a better way to kick off the new campaign.

“It’s going to be a great first game to have. It’s a good time to play them because they’ve just come down and they’ll have pressure to go back up again.

“On the other hand, it’s also a bad time for them to play us because we’ve just been promoted and it’s our first game back in the division. We’re at home as well, so Oakwell will be buzzing and we’re all looking forward to it.” 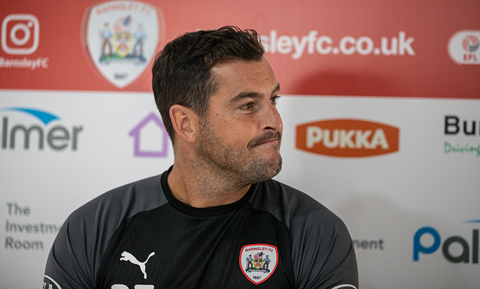 After a one-year absence from the Sky Bet Championship, the Reds will be looking to make their return to the division even more special, by beating a recently relegated Fulham side, packed full of star names.

McGeehan says the team will relish the challenge of facing former Premier League opposition and believes the squad can send out a real statement with a positive result on Saturday.

“They [Fulham], have got a lot of good players that are very well known, but they’ve just been relegated, so it’s going to be an interesting test.

“However, we know we’ve got the momentum from last year going into the game, so we just have to go out there, focus on ourselves and go into it giving everything we’ve got.”

The 24-year-old also praised Head Coach, Daniel Stendel’s philosophy and hopes the team can continue to build on the momentum and the success of gaining automatic promotion from Sky Bet League One last season.

“Between every level, there’s a little bit of a difference." The former Luton star explained.

"Obviously, the pace of the game will be faster, but we played with high intensity over the course of last season, so we’ll look to continue to bring that mantra in during this campaign and maybe even surprise a few teams early on.

“We’re all young and hungry for success and we’ve got a powerful group too, so that’s what we’ll plan to bring to the games.

“We’ll look to play the same way that earned us promotion last season and with the success of that, I hope we can try get at teams by being on the front foot, especially here at Oakwell.

“It been a fortress for us over the last year, and we’ve got to make sure we can keep that going. The home support was massive and hopefully we can get that again and do the same thing, so we can pick up a lot of points in the process.”