Following Easter Monday's 3-0 victory over Plymouth Argyle, Daniel Stendel spoke to the assembled media to offer his thoughts on another big win.

After a third successive victory for his promotion-hunting side, Barnsley Head Coach, Daniel Stendel spoke of his pride and happiness with what he saw.

It was a nervy and scrappy opening period at Home Park, but once the Reds forged in front, there was only one winner.

“We did not start so good," Stendel told us, post-match.

"Then after a very good goal for Cauley Woodrow, we controlled this game. We scored three and had a lot of chances to score more.

"Plymouth only had one chance in the second half and we got another clean sheet. I think that's 21 and a record for us. I am very happy today."

The Gaffer continued to explain how the performance developed on Easter Monday, suggesting a much improved display in terms of work with and without the ball.

As he stated, saying: “At the start, I wasn't convinced, but the first goal changed it, we took control. We had four, maybe five chances and scored three times in the first half and then it was very difficult for Plymouth to come back.

"Then we were good in possession, a good shape out of possession and defended like a top team. I saw some really good football from my team.” 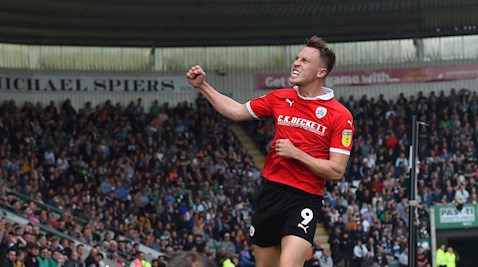 The Reds were cheered on by nearly a thousand supporters, making the longest journey of the season.

Stendel was quick to sing their praises and spoke of his pride in knowing such a togetherness has helped carry Barnsley forward throughout the campaign.

“Like always, we had great support in this game. It's important for us. We had a lot of supporters in our team hotel and I knew a lot of people were coming to the game.

"It is great to see so many here for what is a 600-mile round trip. I, and my players we are very proud of them.

"We are all together at this club."

Kieffer Moore continued to step up his recovery with another substitute appearance, even going close to scoring on a couple of occasions, and Daniel admitted it was pleasing to have him back, and also referred to the performance of Jordan Williams, again showing that it's about the whole squad, and not any one individual.

"It is very good for us," he explained.

"Having him amongst the group and now out there when needed on the pitch.

"But after that time out, maybe 10 weeks, you can see that he's not yet ready to play 90 minutes for us.

"Every player has a part to play for us, I have said that from the start. I was very happy with Jordan again. He plays not like a 19-year-old, but 30 something.

"I am satisfied with this weekend and we now go on our way in the last two games."

Stendel concluded by responding to questions regarding other results in Sky Bet League One, affecting the promotion run-in.

The Gaffer reiterated the fact that no amount of looking elsewhere will change anything, but acknowledged that it's obviously positive when other sides drop points.

“The result from other pitches, we cannot change them. It's about us. But after the wins we can look at others and yes, the result at Peterborough is good for us so I am very happy today.

"But we can only play our games and if we win them then we have a big chance of automatic promotion.”


Speaking after our 1-1 draw with Reading, Dominik Frieser insists it will be a crucial point as the Sky Bet Championship gradually reaches boiling point.


Despite seeing his side claim three more valuable points in the race for the play-offs, Valérien Ismaël expressed his concerns at Barnsley’s overall display in the 1-0 victory against Rotherham...


Match-winner Carlton Morris says the team’s togetherness was crucial to see off a spirited Rotherham United side at Oakwell on Saturday afternoon.


After scoring for the third game running, Carlton Morris asserted that the result is more important than personal glory.


After helping the Reds to a 2-0 victory over Sheffield Wednesday this weekend, goal scorer Jordan Williams says he and his fellow wing-backs are being encouraged to venture further forward and try...


Following his impressive display against Sheffield Wednesday on Saturday afternoon, Jack Walton says he was delighted to be back out on the pitch.


Speaking after our 2-0 win over Sheffield Wednesday on Saturday afternoon, Markus Schopp says there are plenty of positives to take from a productive week both on the training ground and in pre-season...


Following our 2-1 pre-season friendly victory over Rochdale on Wednesday, Markus Schopp says he is eager to continue the hard work on the training ground as he seeks improvements ahead of the new...