This weekend, Barnsley Football Club will welcome a very special mascot to Oakwell for our Sky Bet League One fixture against Fleetwood Town.

Alfie Powell has recently been given the all clear after being diagnosed with cancer in July last year, and will be walking out of the famous tunnel with Reds’ midfielder Cameron McGeehan – who has become a friend of the family following his support towards Alfie – ahead of kick-off.

Amazingly, today, Friday 12th April, Alfie and his family revisited the hospital and 'rang the bell', the reward for getting the all clear, as can be seen in the image above!

While lots of people will remember summer 2018 for England’s heroic World Cup exploits and endless days of sunshine across the nation, it was a season that turned the Powell family’s life upside down.

After a chest x-ray and ultra sound, doctors at Barnsley Hospital found a large mass in Alfie’s kidney area. The family was sent to Sheffield Children’s Hospital, where they spent the next 12 days.

“I cannot even put into words the feelings, the emotion and how we felt seeing Alfie in so much pain,” began Aaron, Alfie’s dad. “He was screaming, crying over and over again when anyone walked into the room.

“The constant poking and prodding, the blood taking, the observations, the pain. His blood pressure was sky high from the stress and the tumour. He didn’t walk for ten days and even when he did, he was like a baby again learning to walk and get his balance.”

Since being diagnosed on 23 July, Alfie had his first dose of chemotherapy and continued the treatment on a weekly basis, which ended on 20 February.

Six months later, on 16 August, they returned to hospital to have the tumour and his kidney to be removed.

“We spent eight days in hospital and were finally allowed home on 24 August where we had to try and get some normality back into our lives,” continued Aaron. “Everything was so full on; Alfie’s behaviour, his reaction to everything and everyone – he was anxious and stressed all the time.

“The constant stares off strangers; Alfie was still having to deal with the side effects of chemotherapy, all the medicine, high blood pressure, feeling poorly, the nasogastric tube, the hair loss, no appetite, feeling and being sick constantly, not being able to walk without any aches or pain, and all while having to be a two year old – which is hard enough.”

In February this year, Alfie had his last dose of chemotherapy and in March – following a delay due to the youngster also suffering with the flu – he had his end of treatment MRI.

On 29 March, consultant Dr Yeomanson contacted the family to tell them the fantastic news that brave little Alfie had no sign of disease or cancer and that he had the all clear – just in time for Mother’s Day and Alfie’s third birthday on 2 April.

Following this incredible outcome, the Powell’s have organised a Fun Day on 22 June at The Greyhound in Worsbrough Dale, Barnsley, to raise funds for the redevelopment of the Cancer Ward at Sheffield Children’s Hospital. 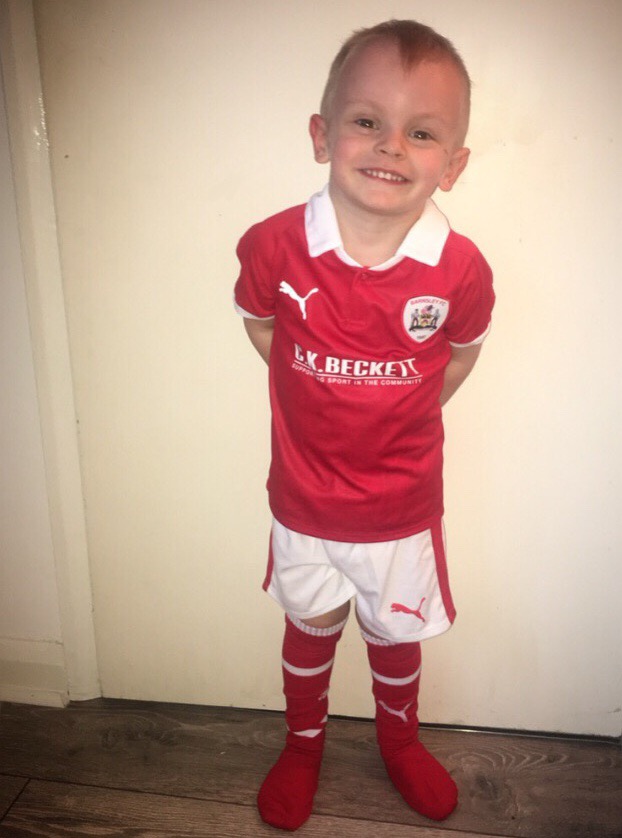