Daniel Stendel believes there were plenty of positives to take as the Reds drew 1-1 at home to Walsall in Sky Bet League One.

Despite the Reds conceding an 89th minute equaliser, the German coach feels his side are moving in the right direction as they challenge for an instant return to the Sky Bet Championship.

“In the first half we moved the ball too slowly," the Reds' Head Coach told us post-match.

"We got caught in possession too much. I changed the system at half time and we began to move the ball a lot quicker, it was pleasing to see the boys react to the change like this.”

Stendel was impressed by Reds youngster Victor Adeboyejo, the striker played a huge part in Barnsley’s goal and was a big threat having come on as a half time substitute.

He explained, saying: “I’m very satisfied witch Victor, he scored on Tuesday in the Checkatrade Trophy and today he played a big part in the goal.

"I'm not sure if it was his goal, I haven't seen the clip back yet. I think it might have gone in off their number 27 in the end.

"Victor is a good young player and he has worked very hard.” 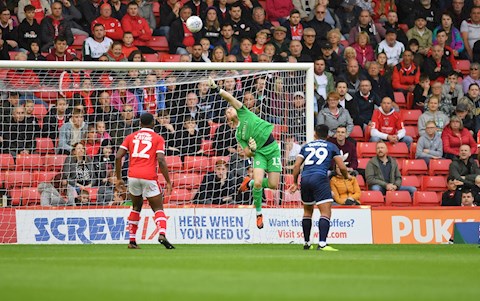 Yesterday’s result means the Red have had their longest unbeaten start to a season since 1946; a stat Stendel is pleased about.

“Of course we are satisfied with our start to the season, you can’t win every game in this division. We’ll continue to work harder and learn from our mistakes.

“Straight after the game I am a little frustrated as we had the chances to finish the game, but Walsall are a good team and I think we can learn well from this result.”

The Reds remain third in Sky Bet League One and travel to the Ricoh Arena to take on Coventry City next Saturday.