Despite falling behind to a Harrison Biggins strike midway through the first half at Highbury Stadium, the Reds rallied quickly and emerged 3-1 victors on the West Coast.

The Reds' gaffer described the win and the performance that achieved it as 'important' as it showed him and the supporters that there are unique opponents and many ways to win a game of football.

Indeed, it was a very physical and competitive clash against Joey Barton's Fleetwood but Barnsley dug deep to claim another three points in their quest to achieve promotion from Sky Bet League One.

Stendel was impressed, telling us post-match: "It was very important for us to win that game. We were behind 1-0 in a difficult situation but we turned the match around.

"From the first minute, Fleetwood were very aggressive, very intensive. But we knew that they would be, we planned for that.

"And we played exactly how we wanted to, knowing that in the end we have too much quality and the power to win the game.

"We also saw a little composure out there today, we controlled situations better and coped well with the long balls. Our own ball possession was lacking second half but sometimes you have to match the opponent to beat them." 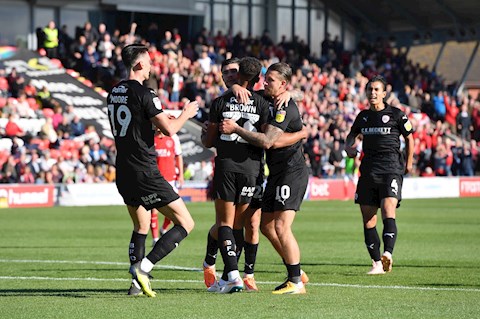 As has often been the case since Daniel took the Oakwell reins, his Barnsley side have been very effective breaking at teams with pace from defensive situations.

Yesterday was no different with the Reds swamping their opponents for quick regain opportunities. This was the case with Mama Thiam's injury time strike, but Barnsley were more varied in their attacking style during the match.

The first goal was a fine piece of skill through the centre of the park, with Alex Mowatt's clever pass finding Jacob Brown inside the box to level up the match, and the Reds' second goal scored by Kieffer Moore came from front to back, one end of the pitch to the other, through the lines.

Stendel was happy to see such flexibility and pointed out the quality of his side's ability yesterday to hit Fleetwood quickly on the break.

"It was a very good performance in the defence, but it was through this that the effectiveness of our counter-attacks paid off.

"We played high-tempo football, created good situations in the game and scored goals in many ways. This is pleasing for us.

"This is a good squad we have, I'm very satisfied with the players who are working hard every day. It's not just 11 players who will play and win the games, we have 20, 25 players we can use whether that's on the pitch in the starting XI or from the bench.

"I was really happy for Jacob Brown today because he repaid the huge faith we show in him. Adam Jackson, this was his first league start and he, Ethan (Pinnock) and Adam Davies shut things down in defence, and then we can bring on Mama and Victor (Adeboyejo) and still not lose quality when we bring on substitutes.

Tickets for Tuesday night's next Sky Bet League One game with Plymouth Argyle at Oakwell remain on sale and you can book online at the best prices by clicking the link below!