Ben Williams was very pleased with his performance on his league debut for the Reds.

The young left-back made his first professional league start at the ABAX Stadium, but insisted any nerves disappeared as soon as the game got underway, stating: “Once the game got going I felt ok and any nerves just went out of the window.”

With injuries to Dani Pinillos and Zeki Fryers, Daniel Stendel turned to the Welsh youngster and Williams was full of praise for his manager. Speaking to the press after the game, he stated: “The Gaffer has been really good this season with giving the younger players a chance. Seeing the likes of Jacob (Brown) and Victor (Adeboyejo) being given a chance has motivated me even more.”

With Peterborough above the Reds in the pre-match Sky Bet League One table, it was a very important game for Williams to make his debut in.

“To get a start against second in the league and come away with three points and a clean sheet, you can’t really get better than that. The Gaffer told me to go out there and treat it like any other game and that’s exactly what I did.” 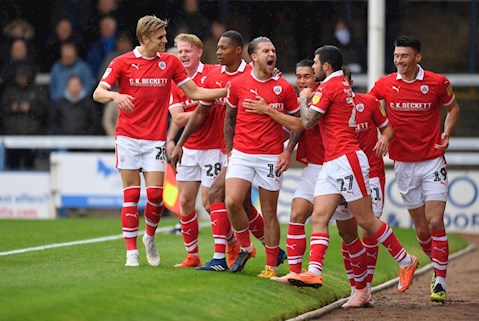 Despite an outstanding performance, Williams is already focused on looking ahead to the next home match against Luton Town, and the possibility of making his Oakwell debut in front of the Sky Sports cameras.

“Hopefully I can kick on from today and if the Gaffer calls on me again I'll be ready. I can’t just sit back and think about this performance, I have to keep going and that starts with Luton next week.”

Backed by another sold away end at the ABAX stadium, the Daniel Stendel’s side grabbed their fifth away win of the season and Williams believes the supporters played a huge part in the victory.

“The fans were unbelievable from start to finish and they helped us get through the game. When you have support as good as this, they really are like a twelfth man and the boys appreciate it.”

It was certainly a debut to remember for the young left back and he admitted he was still coming to terms with it after the game, adding: “I have to pinch myself to make sure I'm not dreaming. After all the hard work I've put in it makes it all worthwhile.”