Cameron McGeehan believes it was important for Barnsley to get back to winning ways against Bristol Rovers following a tough week.

The Reds had lost back-to-back games for the first time this season away to Charlton Athletic and Shrewsbury Town, but responded in kind with a morale boosting victory on Saturday.

“They were two poor games in less than a week given the standards we’ve set ourselves, so it was good to get the win and the type of performance that we wanted to have,” insisted McGeehan. “It wasn’t the prettiest game, but we have another three points on the board now and we can get the ball rolling again.

“League One is a tough league in terms of teams not necessarily coming to play every week. There’s going to be games, like against Bristol Rovers, where the ball is going to go long and it’s going to be more physical.

"We found that out at Shrewsbury and we didn’t match it; we know we’ve got to match it every game, first and foremost, and then the performance should follow.” 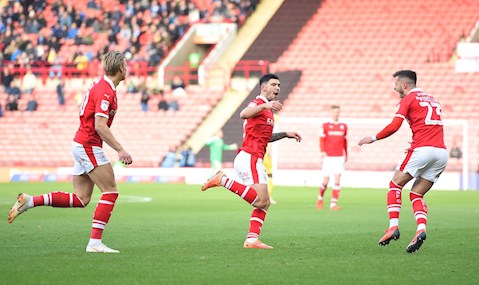 McGeehan made his tenth Sky Bet League One appearance of the campaign in the win over the Pirates and is looking forward to featuring more regularly as the season progresses.

The injury suffered by Kenny Dougall at Shrewsbury may also provide the 23-year-old with an opportunity for a prolonged run in the team, and it’s a prospect that the midfielder is relishing.

“I’m gutted for Kenny; he’s done really well since he’s come in because it’s a completely new league for him,” continued McGeehan. “He’s fitted in really well with the lads and it’s disappointing that he’s injured. But I’ve kept myself ready and knocking on the door, so if that’s how the chance comes, I’ve got to take it and, hopefully, I can play some games now.

“The lads have been doing really well and I know I’ve got to be patient. I’ve got myself into the team in the last couple of weeks, and I’m looking at staying there and having a sustained run to help the team get three points every week and pushing up the table.

“We want to get promoted and we need to get winning games – or even picking up a point away from home if you’re winning at home. They were two poor losses last week and the standards we’ve set ourselves are better than that, so we need to keep the wins coming and keep pushing on.”