Today, November 7th 2018 signals 100 years to the very day that Wilfred Bartrop was killed in action on the Western Front with the British Army, losing his life just four days before the Armistice in November 1918.

A a popular outside-forward who played in two FA Cup finals for Barnsley before joining Liverpool in the months leading up to the First World War, Bartrop was born in Worksop, Nottinghamshire on 22 November 1887, the first of 13 children raised by timber yard worker Benjamin Bartrop and his wife, Annie.

By the time Bartrop left Barnsley in 1914, he had played 183 league and cup games and scored 17 goals for the club. His performances in both FA Cup runs (1910 and 1912) had been integral to Barnsley’s success and he continued to be held in the highest regard by Reds supporters long after leaving Oakwell.

We caught up with Peter Holland today to discuss his amazing story.

Peter is part of the Bartrop family, but it wasn’t something he knew about until he’d had children of his own.

“I live near Oxford and I’m a Professor of Biology at Oxford University,” he explained.

“Wilf Bartrop was my grandfather’s cousin. I first heard about him as a young boy, when my grandfather, Ernest Bartrop told me we had a footballer in the family.

“But as a little boy I completely ignored it if I’m being honest. And it wasn’t until I had children of my own that it crossed my mind again.

“One of my sons, who was 10-years-old I think at the time, he was off to go and play football and I remember telling him that we had a footballer in the family. Pretty much the same as when my grandfather had told me I suppose.

“But my son actually showed real interest and asked me who he was, who he played for and things like that. And I had to say I didn’t really know. But it was from then that I had to try and find out.”

Peter set out to get to the bottom of the story and what he unravelled, he could scarcely believe.

Not only was the family footballer a successful one, he was a war hero too. 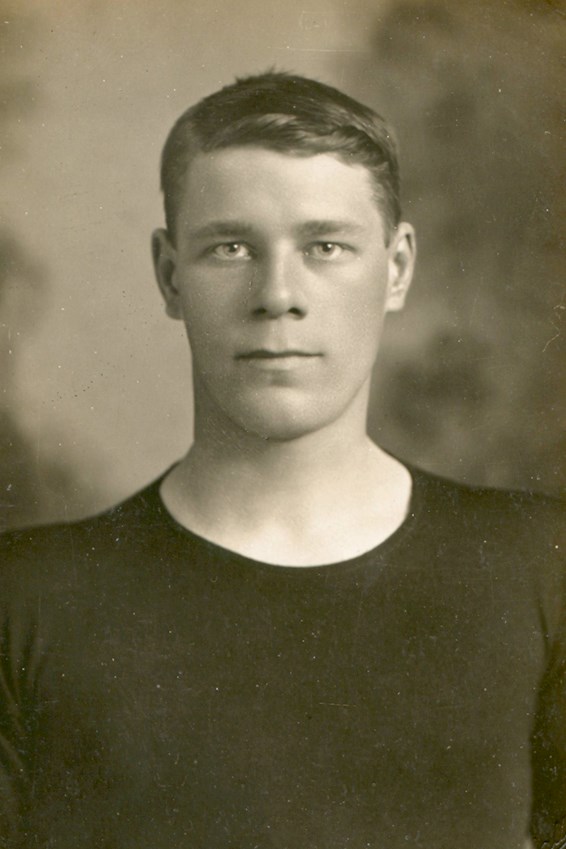 “I tried to trace our family tree and to look into any potential links,” Peter told us.

“And it soon all fell into place, and I could see that it was Wilf Bartrop and he’d played for Barnsley and was an FA Cup winner. It was unbelievable really.

“It all linked together and it was confirmed to us that he was my grandfather’s cousin.

“Despite being cousins there was a big age difference between them. Will was of course born in 1887 and my grandfather Ernest was born in 1910. So basically my grandad would have only known Wilf whilst a young boy.”

Holland continued: “It was very interesting and a worthwhile exercise to put it all together and find out so much about our family, and of course it was superb to finally figure out who the family footballer was.

“I got to find out about so many relatives who were still with us, still alive. It turned into a really interesting story about the life of Wilfred Bartrop and his life growing up, where he lived, his football career and then the tragedy that was the Great War.”

Set against the backdrop of the Great War, Bartrop, having left the Reds had to wait until 19 December 1914 to make his Liverpool debut. With professional football subsequently suspended until the end of hostilities, Bartrop took the decision to return to Nottinghamshire where he began vital war-work in the pit at Worksop’s Manton Colliery.

Bartrop continued to play football and would make a number of wartime guest appearances for local clubs – including one high-profile turnout - ironically considering Saturday’s fixture - for Notts County in a match against the Reds on 9 September 1916. By the start of 1918, however, he had decided to join the British Army as a Gunner in the Royal Field Artillery.

His unit were in positions at Warcoing on 7 November when they came under heavy enemy artillery fire and Wilfred was mortally wounded, dying of his injuries, just four days before the war ended.

Peter has often visited the grave and is doing so once again this weekend.

“I’ll be going to visit the grave again this Saturday and then we’ll be staying for the Armistice celebrations on the Sunday.

“He’s not buried in one of these massive cemeteries that you see the pictures of with hundreds or thousands of graves. He’s actually in a very little churchyard in a small village in Belgium. Just Wilf and three other allied servicemen.

“What he and millions of others did was the ultimate sacrifice I suppose. I know that as a family we are very proud of Wilf.

“I’ve been up to Oakwell a few times over the years and I’m looking forward to getting up again at some point this season.” 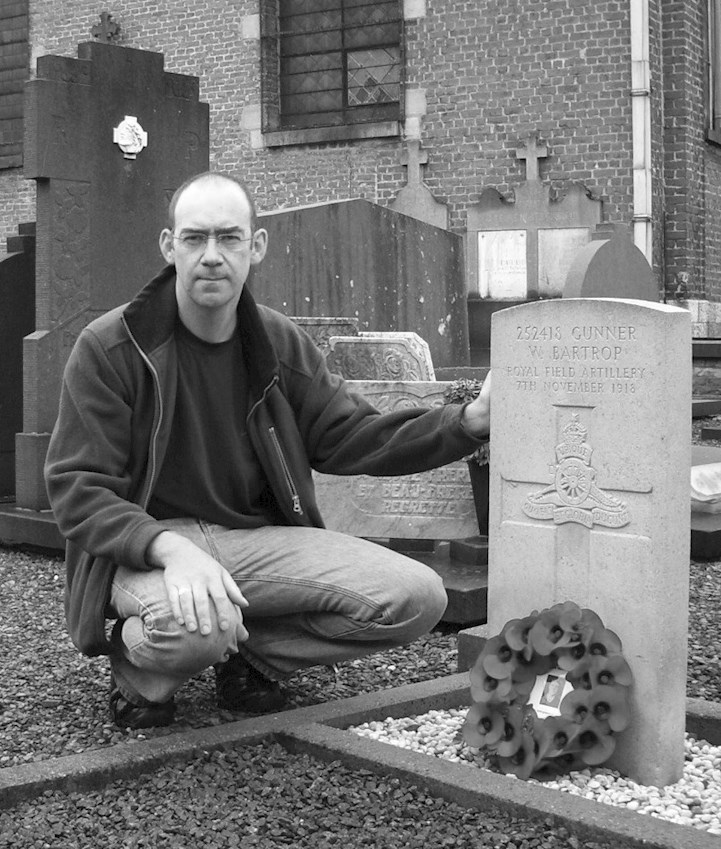 A number of years ago, Peter attended an auction in Chester as Wilfred Bartrop’s 1912 FA Cup winners medal was to be auctioned off.

Unfortunately for him, he was outbid on the day by an anonymous telephone bidder.

But Holland later found out the identity of the winning bidder and is satisfied it’s probably in the right place.

He told us: “I went to the auction to try and get Wilf’s cup winners medal, but sadly I was outbid. The chap who got the medal was an anonymous collector over the phone. But I later found out it was none other than Patrick Cryne!

“He obviously had deeper pockets than I did, but I’m happy that it went to Patrick and I know he lent it to the Football Museum in Manchester and it’s also recently been on loan to Barnsley Town Hall for an exhibition up there.

“It’s good that it’s in a rightful place. It’s not hidden away somewhere, it’s part of the club.”

If you’d like to delve much deeper into the story behind Wilfred Bartrop and Peter’s search for him and all that it entailed, you can order a copy of Peter’s 2009 book ‘Swifter Than The Arrow’ by using the online link below. 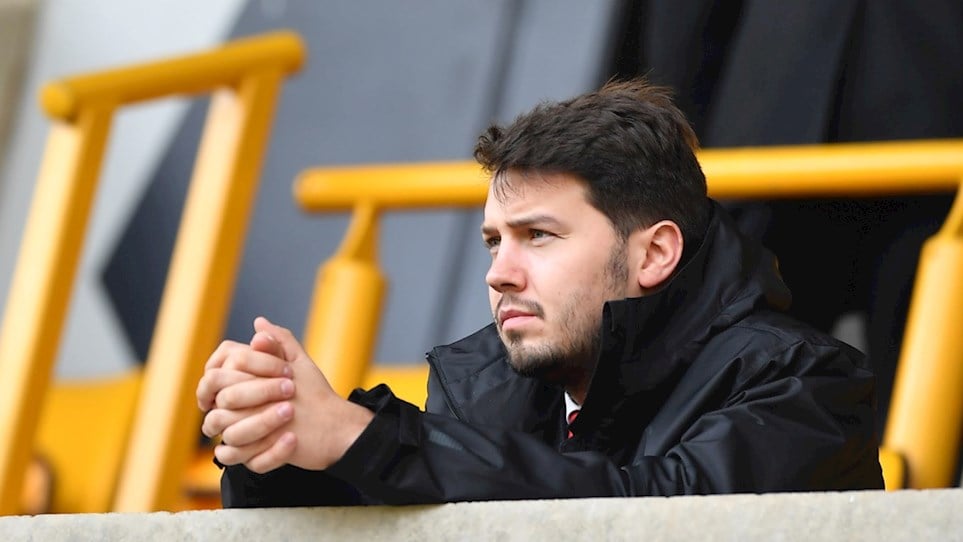