It's crunch time on Sunday, as the Reds travel to Pride Park hoping for one last push in order to maintain a Championship place next season.

Make or break. Up or down. We reach the final game of a long league season and it could not be more vital.

Sunday afternoon at 12:30pm provides 3,000 travelling Reds and many more supporting from the town with an opportunity to back their team one final time, as Barnsley look to confirm their place in the Sky Bet Championship at Pride Park against Gary Rowett’s play-off chasing Derby County side.

Matters are crucially back in the hands of José Morais’ side after a terrific display last weekend saw us run out 2-0 winners over Brentford, ending their play-off hopes and lifting us out of the drop zone on goal difference. Burton Albion’s third straight win over fellow rivals Bolton Wanderers brought the Brewers level with us on 41 points, with Bolton just below on 40. Relegation outsiders Reading and Birmingham City both lost that weekend to be sucked back into the mix and face tough final day fixtures themselves, with the pair on 43 points.

Win, and we are safe. Anything less than a win can still do it, provided results go our way around the grounds as all 24 clubs finish their league campaign on Sunday lunchtime.

Facing Rowett’s men will not be an easy task by any means – the Rams sit in sixth and still have work to do to rubber-stamp their play-off place ahead of outsiders Preston North End, two points behind them. The play-offs are still mathematically possible for Millwall, although a miraculous goal swing would have to take place.

With 90 minutes of the league season to go, the Championship remains wide open – and the Reds are ready to fight. 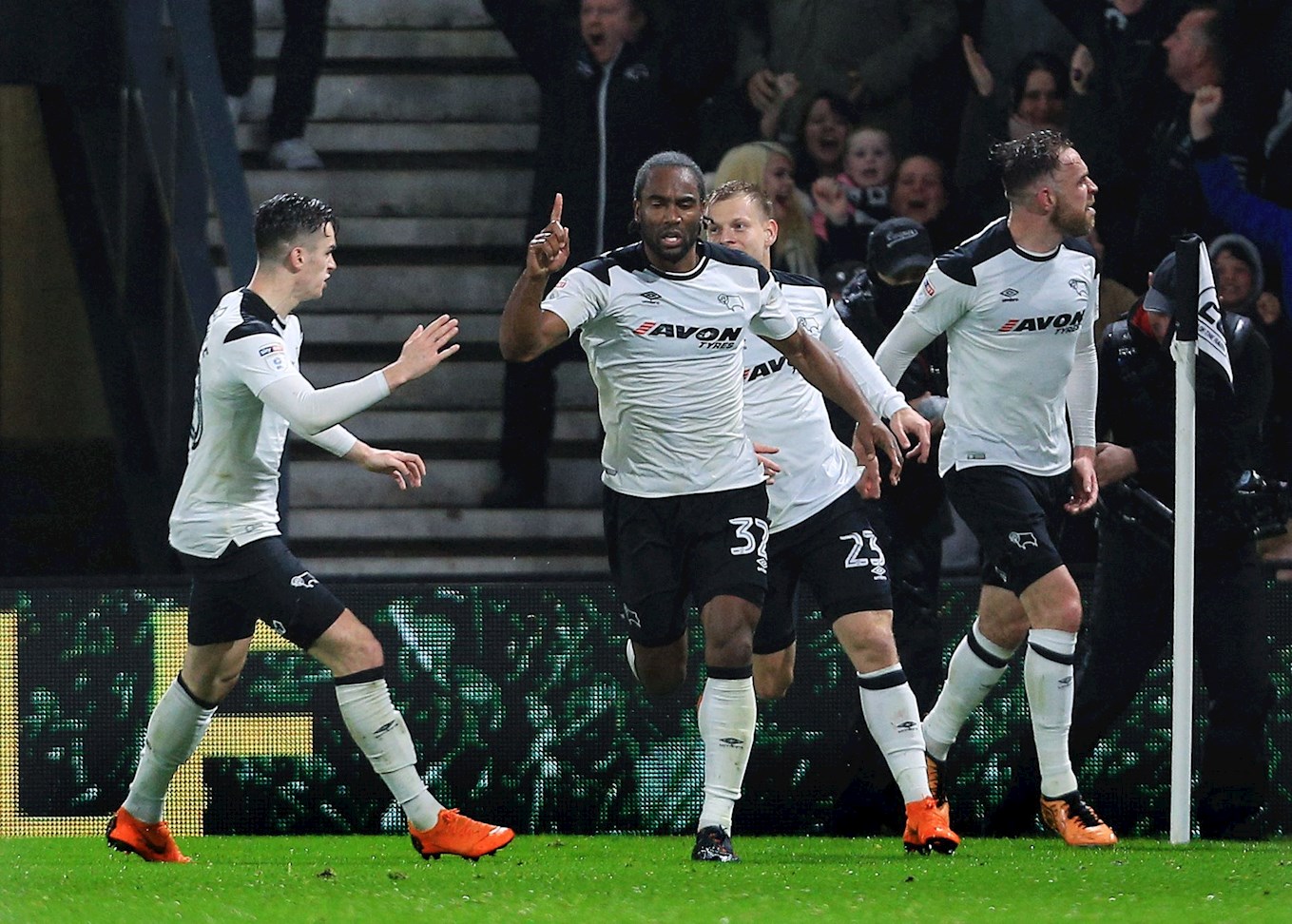 Derby County are a force at this level, and boast a decorated history. The Rams have been successful in the top three divisions of English football, and have also etched their name into cup folklore.

Derby have been champions of England twice, under Brian Clough in 1972 and Dave Mackay in 1975. Whilst also finishing runners-up in the top flight on four occasions, the club have also managed four second division titles, most recently in 1987. They have won the equivalent of League One once, and boast a solitary FA Cup triumph from 1946. Following their second English championship, the club went on to lift the Charity Shield in 1975.

For much of their history, Derby have competed in the top two divisions. The club’s current spell in the Championship though has lasted a decade, after their relegation from the Premier League in 2008 with just 11 points and one win all season. After several rather unconvincing Championship seasons, the club reached the play-off final in 2014, beaten in the dying minutes by 10-man QPR at Wembley. Derby have since always finished in the top half, and managed another play-off place in 2016 before being eliminated by eventual winners Hull City.

The dismal season of 2007/08 has not been Derby’s sole experience of the Premier League by any means. The club spent six years at the top level between 1996 and 2002, peaking under Jim Smith in 1999 with an eighth-place finish and an FA Cup quarter-final.

Now under Rowett’s guidance, the club are pushing to return to where they feel they belong, ready to have another crack at the big-time. 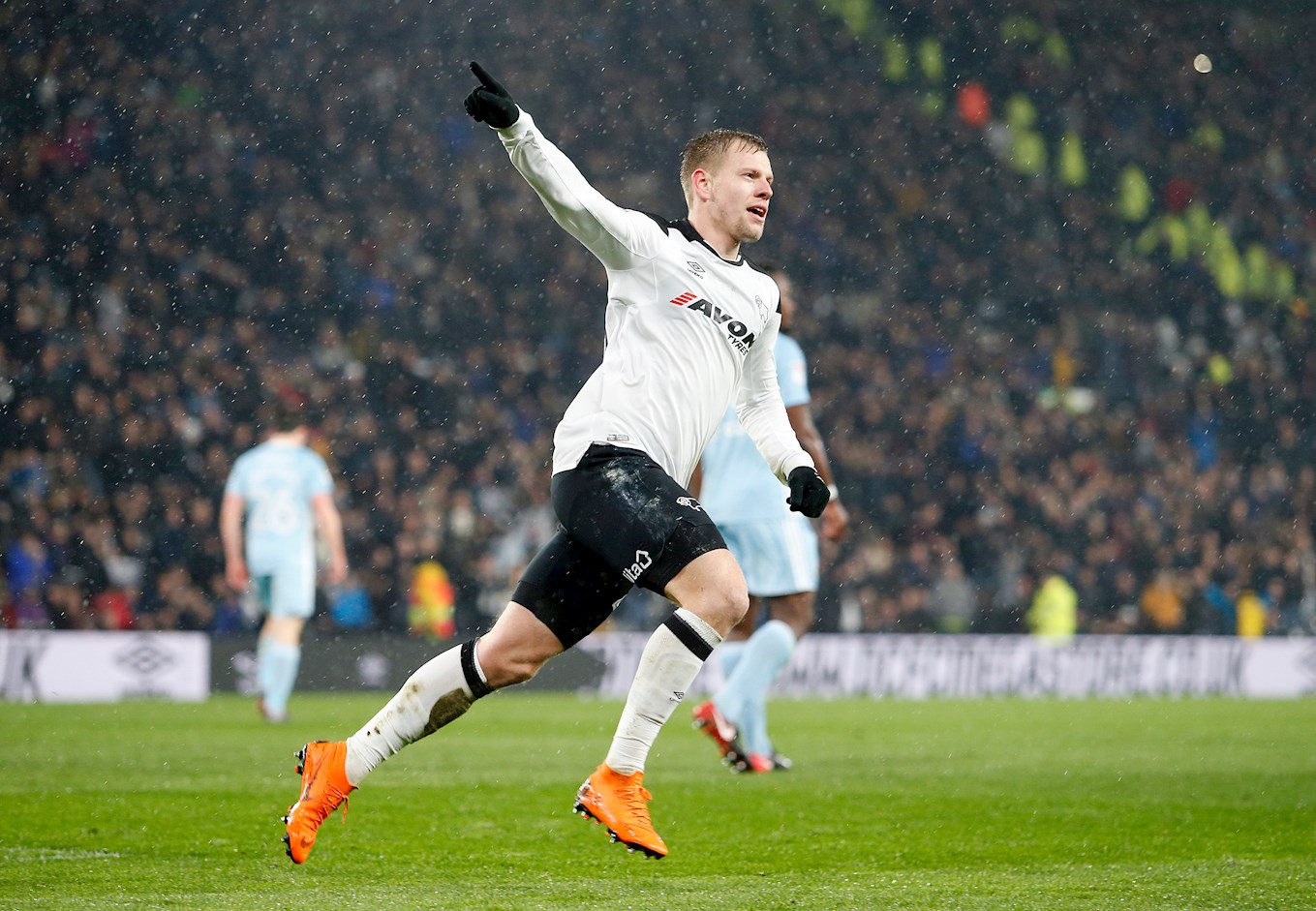 Scott Carson has been Derby’s number one throughout the Championship campaign, the only man to play every minute. The goalkeeper has kept 19 clean sheets so far, a record only topped by John Ruddy of champions, Wolves and Aston Villa’s Sam Johnstone. The 32-year-old has been a household name between the sticks for years, getting his break with Leeds United and earning a move to Liverpool in 2005, featuring on the road to the club’s Champions League success. Establishing himself on loan in the Premier League and earning England recognition in the process, Carson made the number one jersey his own at West Bromwich Albion over a three-year spell. A stint in Turkey with Bursaspor was followed by a move to Wigan Athletic, before arriving at Pride Park in 2015. The stopper was part of the England World Cup squad in 2006 and has four senior caps to his name, the last of which came in 2011, also featuring 28 times for the national under-21 side.

Curtis Davies is Derby’s other squad member to feature in every game this season, albeit missing just seven minutes of play during the league campaign. The experienced centre-half has been vital in the club’s play-off push, and has played years of Premier League and Championship football. Londoner Davies began at Wimbledon before signing professionally with Luton Town, winning promotion from League One and Player of the Season in 2005 and going on to make his name even higher at West Brom and Aston Villa. A brief loan stint at Leicester City was followed by a high-profile move across the Second City to Birmingham, where he found his form and with that a goalscoring touch for a defender, notching 12 goals in 106 appearances. Davies moved to Hull City in 2013, scoring for the Tigers in the 2014 FA Cup final, and signed for the Rams last summer – proving to be a key acquisition for the team.

Tom Huddlestone is an icon at Pride Park, coming through the ranks with boyhood club Derby and appearing for their reserves aged just 15. The midfield man made his senior debut at 16 in 2003, and made the PFA Team of the Year whilst with the Rams in 2005, earning him a move to Tottenham Hotspur, where he would remain for eight years. Huddlestone became a mainstay under several different managers at White Hart Lane, and played at Wembley in the club’s successful League Cup final in 2008. Along with teammate Davies, Huddlestone spent four impressive years at Hull before returning home last summer. An experienced central player with a terrific passing and shooting range, Huddlestone has been capped four times for England – most recently in 2012 – and has played through the age groups from under-16.

Tom Lawrence has been a reliable performer in a Derby shirt this season and leads the team’s assist chart with seven. The Wrexham-born forward and wide player was scouted by Manchester United at the age of eight, developing a great work-rate and excitable presence going forward with the ball. Lawrence remained at United until 2014, signing for Leicester City shortly after being handed his first-team debut by Ryan Giggs. Still at a young age, Lawrence gained experience during loan spells with the likes of Cardiff City and Ipswich Town, before joining Derby in a club-record move last summer, proving to be a big talent. The 24-year-old made his Wales debut in October 2015, and has since earned 12 caps, scoring twice. The tricky attacker is certainly a name to keep track of in the coming years.

Matej Vydra has had a wonderful season in front of goal, driving Derby towards the play-offs with 20 league goals this campaign, front-running for the Golden Boot with Aston Villa’ Lewis Grabban. The Czech international has averaged a strike every 133 minutes this year, and sits 12 goals in front of the next highest league scorer, David Nugent. Vydra arrived in Derbyshire in 2016 from Watford, after a spell on loan at Reading. The striker has had the most successful times in his career playing in the Championship, bursting onto the English football scene after arriving as one of several players on loan at Watford from Serie A side Udinese in 2012, going on to become Championship Player of the Year in his debut season. Also featuring for West Brom in the Premier League, Vydra began his career in his homeland with Vysocina Jihlava and Banik Ostrava. The 26-year-old made his full Czech debut in 2012, and has 19 caps (five goals) to his name thus far. 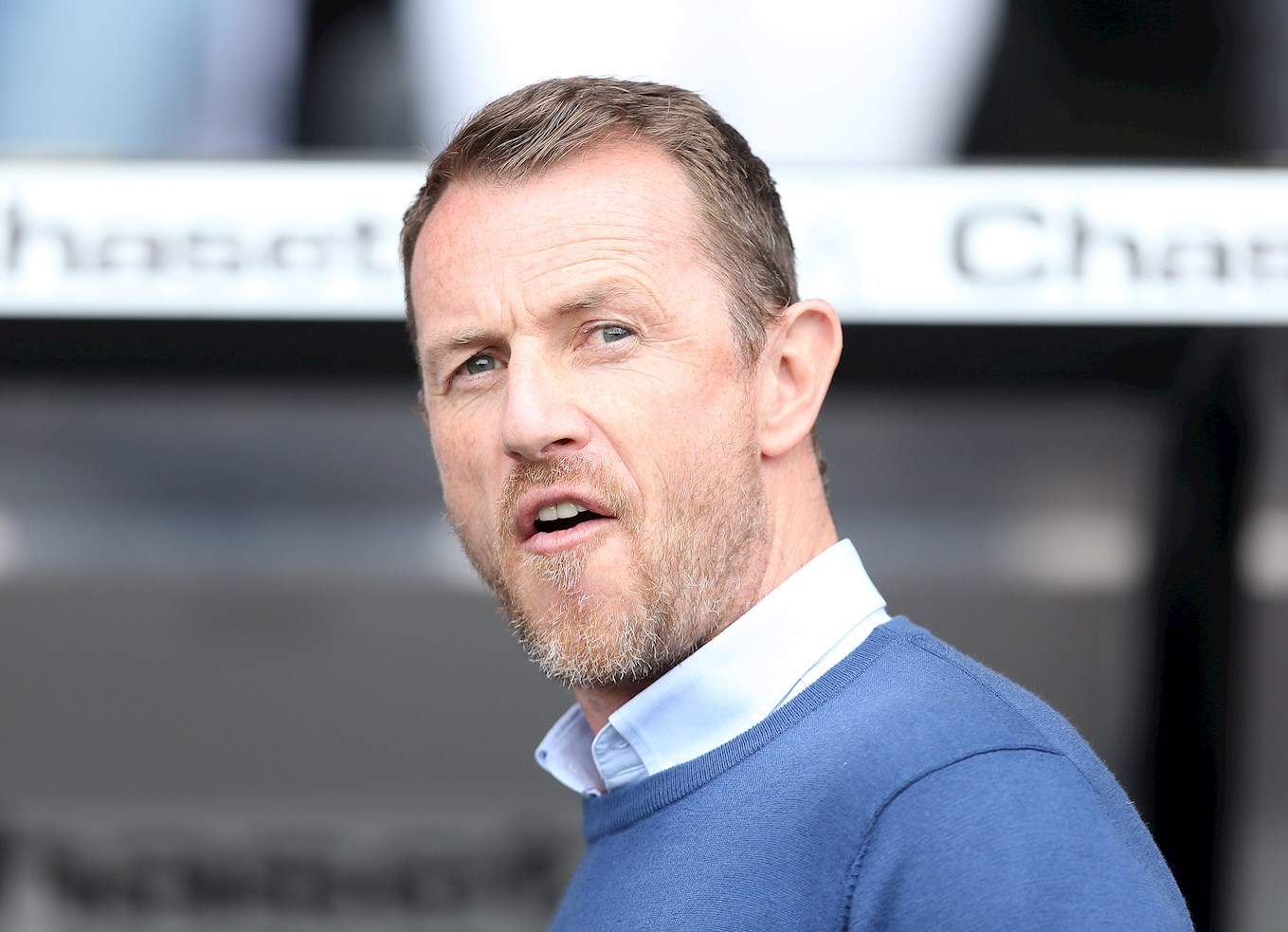 Gary Rowett has become an established Championship manager in recent seasons. The 44-year-old had a solid playing career as a defender with the likes of Birmingham, Leicester and Derby themselves, before hanging up his boots with Burton in 2007. Rowett became assistant to Paul Peschisolido at the Brewers in 2009, and was appointed manager in 2012. After two years with a former club he will be seeking to help on Sunday, Rowett moved to Birmingham City in 2014 before his departure in 2016, and has been at the helm of Derby for nearly 14 months, steering the side towards a play-off push. 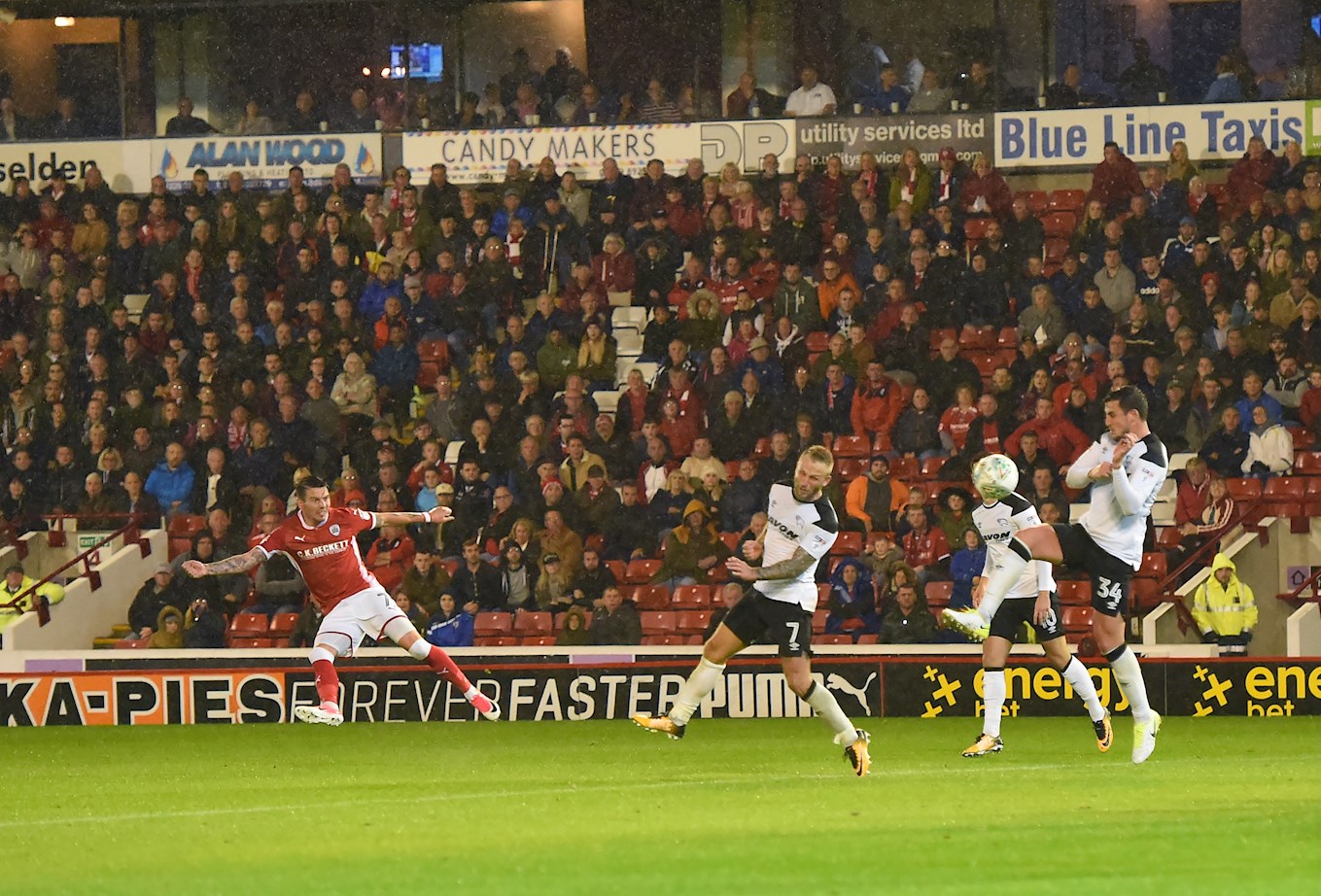 Barnsley have faced Derby County 67 times in past meetings, with the Reds winning 20 to the Rams’ 32.

The reverse fixture this season back in December did not go according to plan, with a spirited performance ultimately being sucker-punched as Rowett’s side won 3-0 at Oakwell. However, our Carabao Cup second round clash this season did go the Reds’ way, coming from behind to win 3-2, with Adam Hammill’s late screamer sending us to Wembley to face Spurs last September.

This certainly has not been the first time our number seven has struck from range against Derby. Our last victory at Pride Park came in September 2009, another 3-2 success with Hammill’s wonderful first-half leveller getting us off the mark, Andy Gray and Anderson Da Silva later sealing all three points.

The incentive is simple: win, and we are staying up. You Reds. 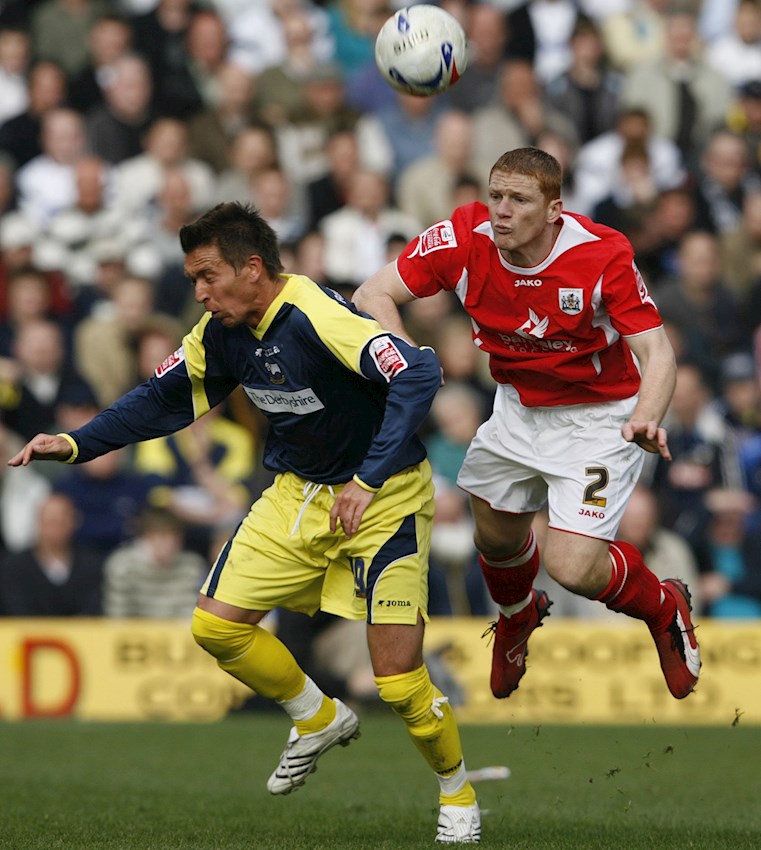 
Everything you need to know about our clash with the Rams here at Oakwell!