23-year-old midfielder is looking to help his loan-side to promotion via the play-offs.

Cameron McGeehan’s 88th minute leveller in Scunthorpe United’s first-leg tie with Rotherham United during Saturday’s 2-2 draw was his first for the Iron, setting up the second leg nicely with all to play for as both teams look to return to the Sky Bet Championship.

The Lincolnshire outfit were relegated from the second tier at the end of the 2010/11 season, and a brief but successful stint in League Two has been their only division change since.

“My last goal was against Middlesbrough so it has been a while,” said McGeehan. “I was due one! I haven’t played a huge amount but goals have always been part of my game. I kept believing I would have an impact and I knew I could help this team in some way. It was big for me to get that goal and get us back into the tie, I hope I can have an impact again in the second leg, and if we can all pull together and get the result we want then we can go to Wembley! All Barnsley fans know what a special day that can be so hopefully I can get there, fingers crossed.”

Cameron began his loan-spell at the back end of the January window and although it hasn’t been all of what he hoped it would be, he’s still taken all the positives from his time there so far, which he hopes will be extended to the end of May with a trip to Wembley.

“Signing in January was strange because I had a good conversation with Paul Heckingbottom who explained that I had done well when I had played but I just wasn’t fully fit, I wasn’t match fit and after my leg injury it was key that I had to do that so he said he thinks I should go out and play every week. Scunthorpe was the best option for me at the time, it’s relatively local to Barnsley and they were flying when I joined them so it all seemed to be a good fit.

“For whatever reason, myself and Graham Alexander didn’t see eye to eye in terms of our style of play, he wanted to play two sitting midfielders so it was a bit of a strange one that he wanted to sign me in the first place if he didn’t play my position. I’ve come on during a lot of games and played in pretty much every game even if that was off the bench and it has been a good experience.”

Having joined the Reds whilst in the Championship from former club Luton Town, McGeehan can now boast experience across all three football league divisions over the last two years, and he believes that will keep him in good stead for the challenges that face him upon his return to Oakwell.

“I’ve played in every league now with the exception of the Premier League. I had the National League and League Two with Luton, before playing some matches in the Championship with Barnsley, then League One with Scunthorpe, I’ve had a good taste of what they are all about. Scunthorpe have been a really competitive team in this league, they’ve got a really good squad so it was always going to be a hard team to get into but I do feel I have had an impact. 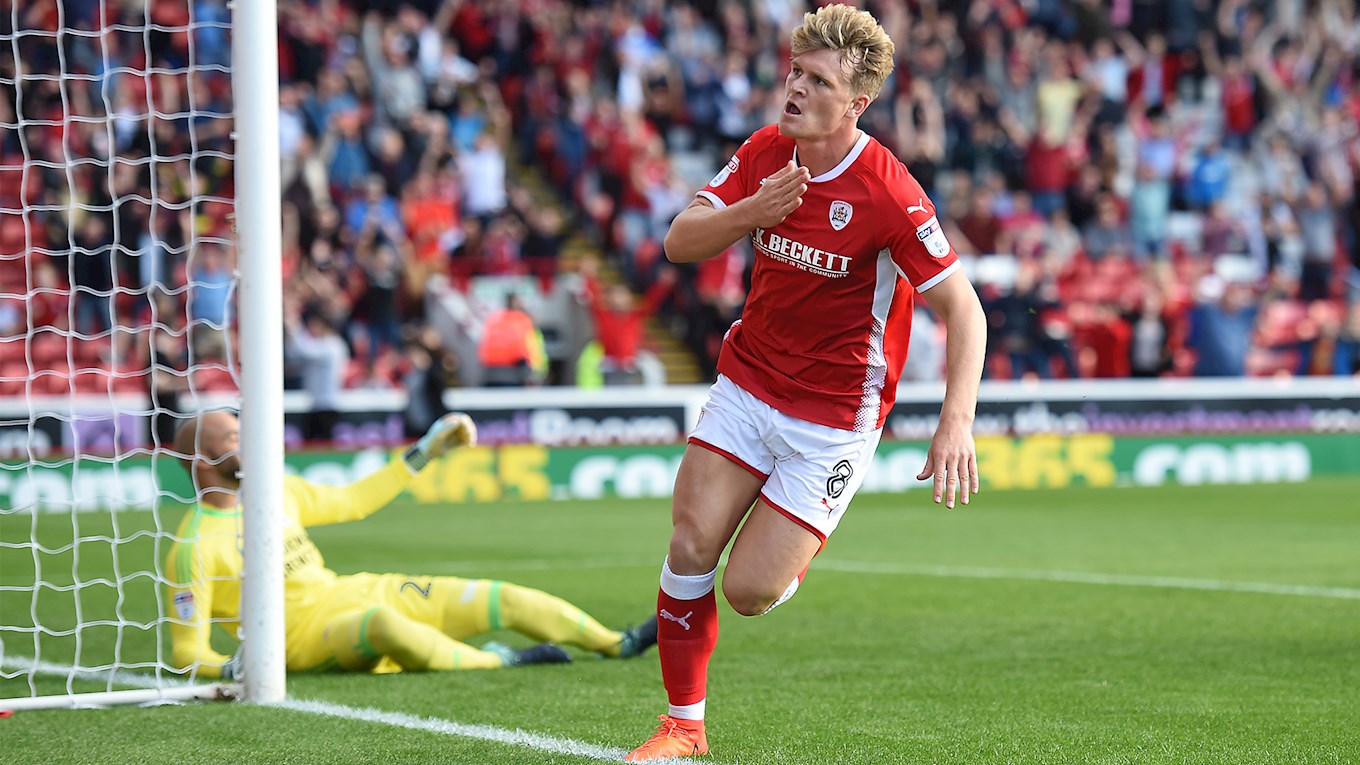 “If I am truly honest I haven’t been fit since, I’ve been playing catch-up all season following the leg break. This was always going to be a season where I was going to have to work hard and get myself back into things and over the last couple of months I’ve really began to feel I am back to my best in terms of my body, I feel good in my mentality too and Scunthorpe have been good for that. From the outside looking in I guess it seems like it hasn’t been a good loan in terms of my playing time but that’s wrong, I haven’t started every week but I am part of a team that could get promoted and I have been helped to get back feeling my best. They’re a great set of lads there and I have had a good experience in League One which is only going to help me and beneficial to me and Barnsley for next season.

“I’ve seen every team in League One now and I obviously know Luton quite well who are coming up so I would say that with Barnsley coming down to the league, I know next year it will be one of the strongest divisions I’ve seen.”

Of course, the constant growth of social media platforms such as Twitter and Instagram which allow fans to keep in contact with the players has allowed McGeehan to see how valued he is amongst the Barnsley fanbase. He has regularly received messages of support and wants to repay fans when he returns for next years campaign.

“I’ve had loads of messages telling me they wished I hadn’t gone in January and of course I wanted to stay and be here and play, to fight, but it wasn’t to be and everything happens for a reason. The support has been great though from the fans that I have bumped into or seen on social media, they’ve all said they can’t wait to see me back in a Barnsley shirt and it really is nice to hear those comments, I see all the messages and I really appreciate it so thank you to them, hopefully I can be involved next season and look to get us back where we should be which will be a thank you in itself.

“It’s pretty strange because I’m a Barnsley player, so it was really sad for me to see the relegation happen. Albeit from afar, I was gutted, but I understood that my job was with Scunthorpe so I just had to continue to give my all here and I hope that’s what I have done knowing there was a possibility of Barnsley going down. It’s great for me to experience a push for promotion and the different emotions, so I have just stayed professional even if things hadn’t gone to plan at Barnsley whilst I was away.”

With Scunthorpe having at least one, potentially two games remaining, McGeehan has already stated his summer intentions and it won’t be a relaxing one. The midfielder had a tough spell on the side-lines after breaking his leg with Luton Town during the 2016/17 league season. He now wants to put that set-back firmly behind him and be ready for August’s big kick-off.

“It’s a big pre-season for me now, I haven’t felt fully fully fit all season so I want to have a small break, then just work as hard as I can to get as fit as I can in what is going to be a big season for Barnsley. My focus over summer is fitness, I know what it’s like in League One now and I want to work hard to be at my best.

“I get on really well with Pottsy [Brad Potts] and Jase [Jason McCarthy], we’ve met up plenty of times and I’ve kept in touch with the majority of the squad as well as keeping an eye on results. It’ll be fun now to see what happens next for us, I know we’ve got the squad there to go and do well in League One.”

Fans can watch Cameron McGeehan in action on Wednesday evening at the New York Stadium on Sky Sports as his Scunthorpe side aim for Wembley. Kick-off is at 7:45pm in the big play-off second leg!