Ahead of this weekend's big Yorkshire derby, we caught up with a man who represented both the Reds and Saturday's opponents, the Bantams, with distinction.

Despite what was a fairly brief time at Oakwell for Ashley Ward, in his 15 months at the club between 1997 and 1998 his impact was so great that he's forever revered by Reds supporters young and old.

Look no further than his recent inclusion on the 24-man Oakwell Hall Of Hame shortlist.

Plundering 25 goals for the Reds in just 60 appearances, Ward was one of the shining lights for Barnsley during our one-year stay in the Premier League and then went goal-crazy back in the second tier, so much so that the Reds couldn't turn down a club-record transfer fee from Blackburn Rovers for his services in December of 1998.

That was 20 years ago but Ashley's own love for everything Barnsley FC matches that of his adoring supporters back in the day, and when he spoke with barnsleyfc.co.uk this week he was quick to point out that the Barnsley result is the first he looks for on a matchday.

"I follow them as best as I can, but obviously I don't get the opportunity to come to matches as often as I would like, I only got up for the Aston Villa game last season unfortunately, but it's a club that's close to my heart for obvious reasons.

"It's difficult watching from afar but it's clearly been an up and down few years for the club and I, like the superb fanbase at Oakwell, will be hoping that they can get back into the Championship and who knows, maybe one day get back up to the heights that we were at all those years ago now." 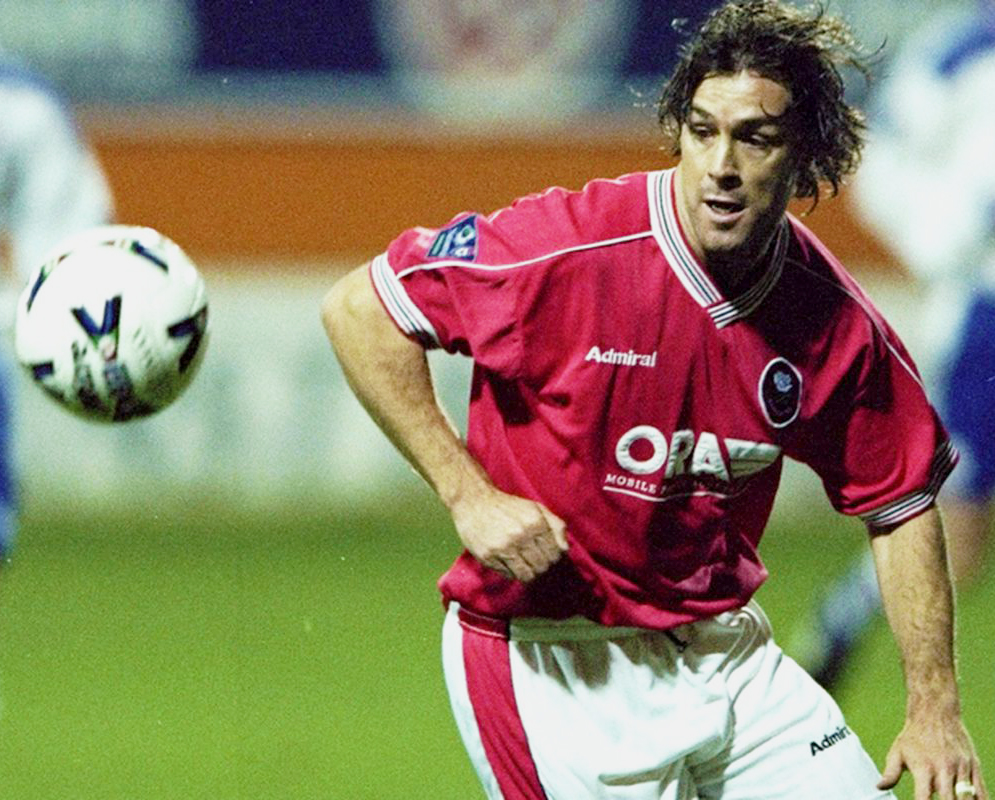 Ward, now a successful businessman with wife Dawn, believes the Reds are a Championship club at the least, in terms of support and the club's history over 131 years. But he's as aware as anyone that money talks too much in the industry and with the second tier now resembling the Premier League more and more with each passing season, for the likes of Barnsley and Bradford City, competing at that level is getting increasingly more difficult.

He explained, saying: "I reckon Barnsley should be a Championship club, minimum, to be honest. If you look at the setup now, the facilities there and obviously the size of the fanbase, they're too big for the division they now find themselves in.

"Now of course, there's some really big clubs in the Championship but I still think they're more than capable of holding their own in that division. I don't know why they went back down but you hope lessons have been learned, whatever they were and that should they get back up there they can grow rather than fade away again.

"Bradford are in a similar boat really, but it's a strange one because in truth it's always been a real massive rugby city. But they had that period of success around the same sort of time, which was incredible for the club. I'm sure they too see themselves as a Championship club at worst." 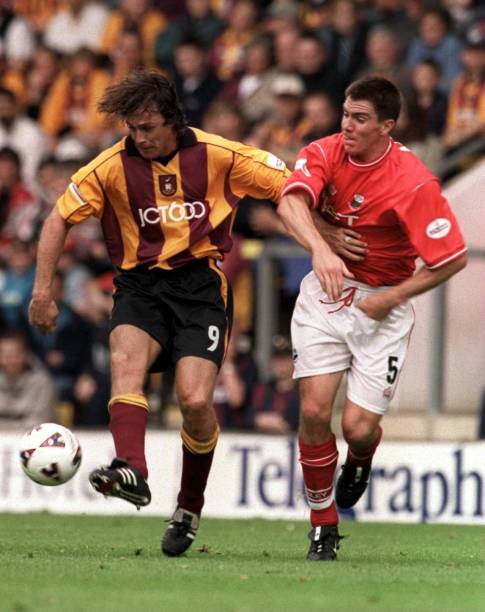 It's quite fitting that this Saturday as the Reds travel up the road to face off against the Bantams that it was on the exact same date - August 11th - but in 2001 that Ward scored twice for Bradford against Barnsley in what was the opening game of the season, in a 4-0 thumping for the Reds.

We asked the popular frontman what that was like, scoring against Barnsley, rather than for the Reds.

"It was quite weird, I have to be honest. I mean, you're doing a job at the end of the day and you get lost in doing that, but to score against a former club and one you've enjoyed playing for as much as I did, I mean, I really loved it at Barnsley, it was strange I have to admit.

"It's one of those bittersweet parts of the game really, scoring like that and winning the game. I remember doing the same at Oakwell too and you just have to remember you're doing your job really, it's all part of the game."

Ward confirmed what many supporters had guessed during that time period, that he indeed had come close to a return to Oakwell.

He explained that whilst Bradford were going through financial problems following their own relegation from the top flight, a move back to Barnsley was as close as a transfer could ever be, reaching the medical stage.

He told us: "It was very close once, you know. I even came back and had a medical!

"I was still with Bradford at the time, but it was at their end that it collapsed, I'm not sure even now as to why the plug was pulled on it. But it was a shame for me at the time as I'd been really looking forward to coming back.

"It was a pretty tough time for the club with the relegation and administration, Bradford were in dire straits really but for whatever reason the move never got finalised and I eventually ended up going to Sheffield United." 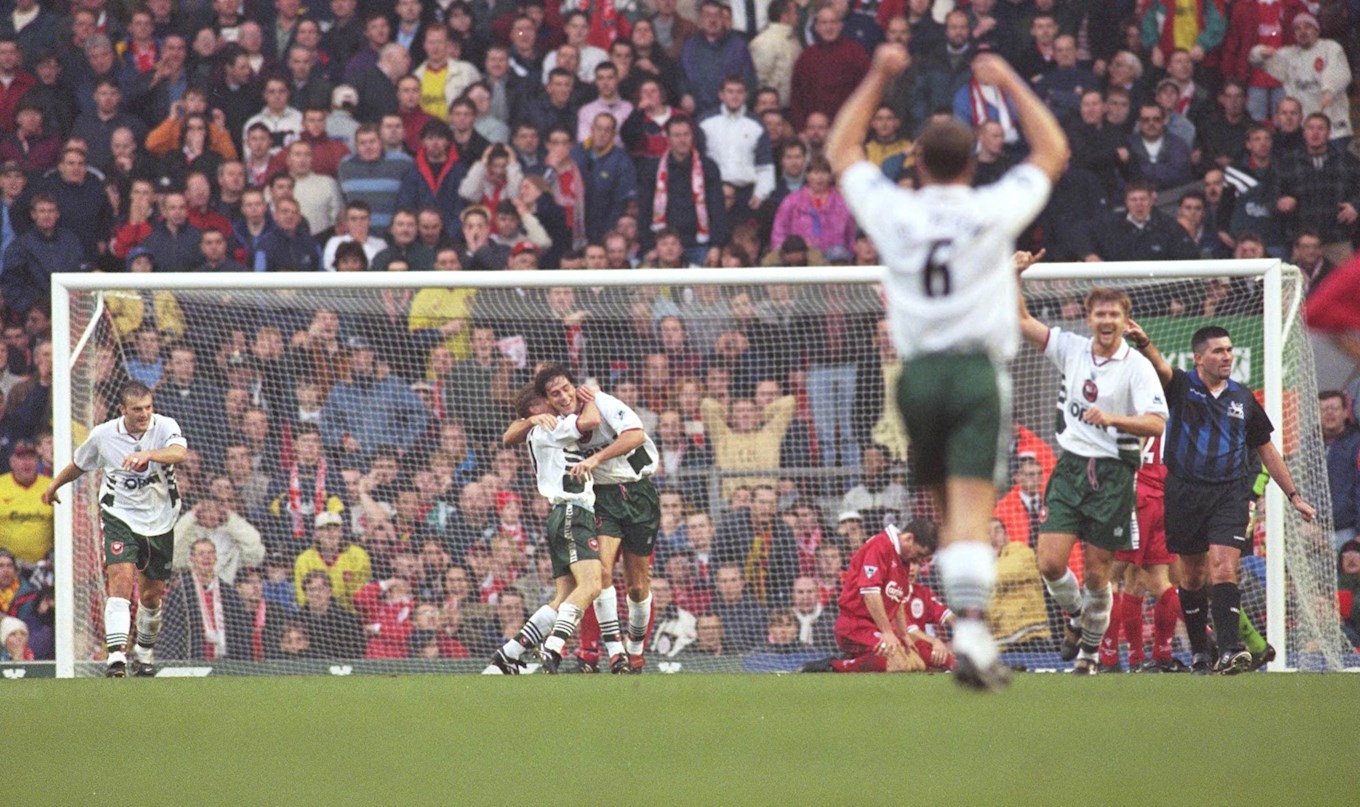 We asked Ashley what his favourite moments were when wearing the Reds shirt for Barnsley, and whilst he admitted he could have named many, there were a handful that stood out to him.

Some of the Reds' standout victories in the Premier League were games in which Ward scored the winners, so they got a mention, but his final appearance at Oakwell is a match he's always remembered as was a famous FA Cup night in Barnsley, when Tottenham Hotspur were cast aside.

"That cup win over Spurs stands out," he answered, smiling.

"I think that game really did marry up with the 'Brazil' feeling at the time. We ripped a very good team apart that evening and I remember powering home a cross by Redders (Neil Redfearn) right in front of the Ponty End.

"My last game was a crazy one wasn't it? They weren't even a bad side, Huddersfield, but it literally could have been 11 or 12 nil at half time, we had so many chances. Fans remember that as the only time myself, Bruce Dyer and Craig Hignett played together as that triangle up top, so I know they always think 'what if?' about that.

"And then obviously to score the winner away at Anfield against Liverpool, that was special. The win at Aston Villa midweek. There were so many memories I made in such a short time. I'll never forget them." 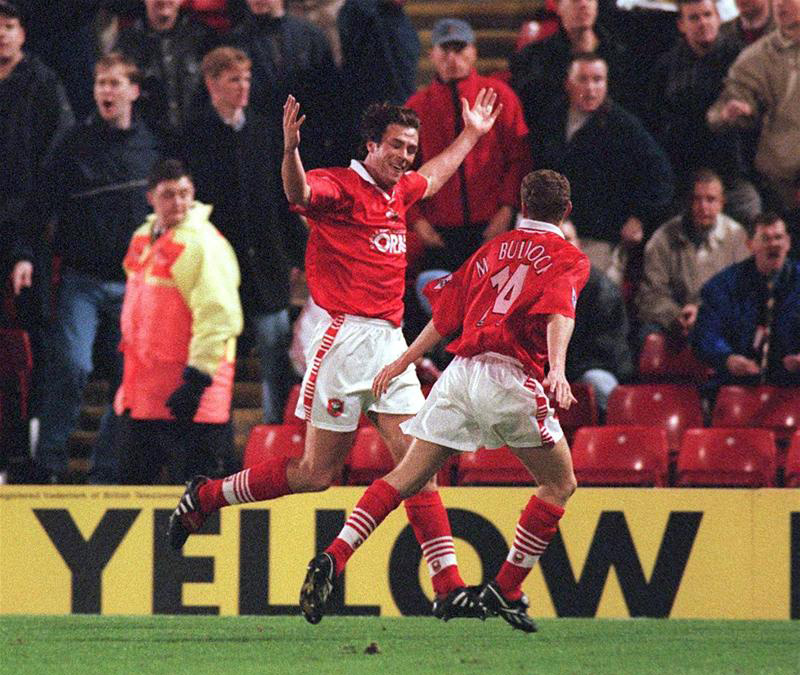 As mentioned earlier, Ashley is on the shortlist for induction into the Oakwell Hall Of Fame, which Barnsley Football Club launched this summer, and he will be one of many guests who will be attending the inaugural awards evening in October.

He tells us he'll be getting everyone he knows to vote for him, but in all seriousness he wanted to thank the Reds supporters for their loyal backing throughout his time at the club and spoke of the lovely reception he received at Oakwell last summer when he came back for the 130th Anniversary celebrations.

"It's fantastic to think I'm still remembered fondly like that. It really is something I take real pride in, knowing my efforts for the club were appreciated.

"It was a real honour to walk out one more time onto Oakwell last year alongside other players who've represented the club, and I can't wait to come back again in October and share a superb evening with players and fans alike.

"The football club at Barnsley, it is Barnsley. It's a real unique atmosphere and feeling there that I've never felt elsewhere. It's like the club is the town, and that it means everything to the people of the town.

"The people of Barnsley just want you to appreciate that I think, and fingers crossed the current crop get that, because maybe in 20 years time it'll be them who are proud to be remembered like I am today!"

Don't forget to make your vote count in this year's Oakwell Hall Of Fame fans vote!