Watkins volley helps the Reds battle to a hard fought point in the Yorkshire derby against Huddersfield Town!

Marley Watkins’ exquisite volley earned a battling Barnsley a point in this afternoon’s 1-1 Yorkshire derby with Huddersfield Town.
Michael Hefele nodded the visitors ahead from a corner after 18 minutes and it could have been two, had Adam Davies not made a crucial double save to keep out Izzy Brown and Aaron Mooy.
Watkins came close to levelling with a hooked effort before sweeping home substitute Adam Hammill’s perfect cross for the equaliser 16 minutes from time.
The result could have been so much different had Izzy Brown and Collin Quaner not wasted chances from close range, both saw their efforts cleared off the line by a combination of Angus MacDonald, Marc Roberts and Andy Yiadom.
But it was Adam Davies who proved to be the hero on the day, making a superhuman save to turn away Brown’s close range attempt in stoppage time. The result closes the gap between the Reds and the play-offs to eight points.
After a tight start to the game with very few chances, the Reds felt they should have been awarded a penalty just before the quarter hour mark.
A fast break orchestrated by Josh Scowen gave Ryan Kent a one-on-one chance with Michael Hefele. The winger danced away from the German and seemed to be clipped by the centre-back, but nothing was given.
Chris Lowe chanced his arm with a 25-yard free kick soon after that deflected behind and from the resulting corner, Hefele rose highest to nod the Terriers ahead in the 18th minute.
The Reds almost responded within 60 seconds as Andy Yiadom slipped in Marley Watkins but as his effort flew towards Danny Ward’s goal, it was inadvertently blocked by Alex Mowatt.
The first yellow card was awarded to Gethin Jones for pulling back Elias Kachunga as he raced in on goal, quickly followed by Aaron Mooy, cautioned for a poor challenge on Josh Scowen.
Angus MacDonald came close to his first Championship goal when he glanced on Marc Roberts’ long throw and despite initially spilling the ball, Ward gathered his effort at the second attempt.
Adam Davies made a crucial double save to keep out both Izzy Brown and Mooy in quick succession, springing away well to his left on both occasions to keep the Town players out.
Tommy Smith was cautioned just before the break after hauling back Kent as he charged clear, while Collin Quaner and Barnsley’s Angus MacDonald failed to hit the target right at the end of the half.
HALF TIME: Barnsley 0-1 Huddersfield Town.
Almost immediately after the second half had kicked off, the Reds were piling pressure on the Huddersfield goal, with Kent’s low drive deflected behind and the Terriers scrambling the resulting corner away to safety.
A horrible looking challenge from Dean Whitehead on Marley Watkins only resulted in a yellow card for the Huddersfield midfielder shortly after, before Matty James cleared a low drive from substitute Jon Gorenc-Stankovic off the line.
The introduction of Tom Bradshaw and Adam Hammill off the bench almost provided an immediate impact, with the striker having a header pushed away by Ward, before the stopper denied Watkins’ hooked effort.
As the fouls continued to fly in from the visitors, Phillip Billing was booked for chopping down Josh Scowen but the Reds were level shortly after in emphatic fashion.
A sumptuous cross from Adam Hammill was swept home on the volley by Marley Watkins, an expert finish from the Welsh striker, to tie the Yorkshire derby up at 1-1.
Almost immediately though, the Terriers should have edged back ahead when Izzy Brown forced his way into the area.
The Chelsea loanee rounded Davies but with the goal at his mercy, a stunning goal line clearance from Marc Roberts kept him out. The follow-up dropped to Quaner, but he was denied by a combination of Andy Yiadom and Angus MacDonald.
Davies displayed his excellent shot stopping ability again moments later, keeping out a ferocious volley from Quaner on the edge of the area.
James again was called upon to clear a Hefele header off the line with Davies smothering the rebound and with six minutes remaining, Tom Bradshaw’s header was chested off the line by Lowe.
A late altercation between Adam Davies and Izzy Brown resulted in a booking for both players after the Town striker deliberately knocked the ball out of the Welshman’s hands.
And the Welshman made his most important save of save of the game in the final minute, keeping out Brown from six yards, who failed to convert Joe Lolley’s pullback.
Attendance: 18,075 (4,619 away).
Reds: Davies (GK), Yiadom, Macdonald, Roberts (c), Jones, Mowatt (Bradshaw, 61’ ), James, Scowen, Kent (Hammill, 61’ ), Watkins, Armstrong (Williams, 90+2' ).
Subs: Townsend (GK), Moncur, A. Jackson, Elder.
Huddersfield Town: Ward, Smith, Hefele, Schindler (Gorenc-Stankovic, 50’ ), Lowe, Mooy, Whitehead (c) (Billing, 59’ ), Kachunga, Brown, van la Parra (Lolley, 81’ ), Quaner.
Subs: Coddington (GK), Holmes-Dennis, Cranie, Payne.


Barnsley maintained their 100% home record under Valérien Ismaël with a richly-deserved 2-0 victory over Nottingham Forest.


Barnsley made it three wins from four games under Valérien Ismael with first victory in Derby since 2009.


The Reds began November with a chastening defeat away at a bitterly cold Cardiff on Tuesday night. 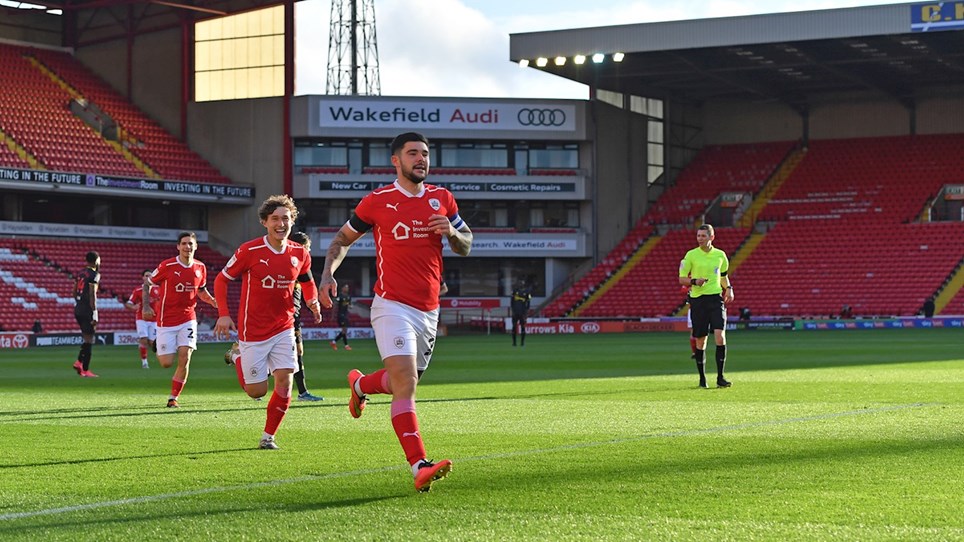 
Barnsley recorded back-to-back victories as they narrowly edged out Watford at Oakwell on Saturday afternoon.