Skip to main content Skip to site footer
Reds 1 (Pedersen 16)
Sheff Wed 1 (Fryatt 59)
Barnsley and Sheffield Wednesday shared the pride and the points at Oakwell with a goal in either half meaning a 1-1 draw in the October sunshine.
The atmosphere was cranked up and both sets of supporters were in tremendous voice for the first South Yorkshire derby of the season.
On eight minutes Wednesday went close as Roger Johnson latched on to a deep cross at the far stick but his header thumped the side-netting.
At the other end Tom Kennedy tried his luck from 25 yards when he curled a free-kick towards the top corner but it skimmed the roof of the net on the way over.
On 16 minutes the game exploded into life when Marcus Pedersen first rattled the post of Kirkland after latching onto McCourt's interception, but he picked up the rebound to rifle home with a wicked drive from just outside the area.
Wednesday were keen on getting the ball down the channel to win throw-ins that would be launched into the box. Antonio took a pot-shot that was blocked on the edge of the area before Helan saw his effort deflected wide for a corner on 39 minutes.
With only three minutes left in the first half, Paddy McCourt continued his magical form when he danced past four men in the box but his shot dragged across the face of goal.
A minimum of one minute was added for stoppages.
Second half
The Reds looked hungrier than their South Yorkshire counterparts and twice almost extended the lead early on in the second half.
Wiseman went on a great run but saw his shot hit the side-netting after bursting into the box. Then David Perkins won the ball well before charging into the area but could only fire over the bar on 50 minutes.
The Wednesday following didn't like it when Jermaine Johnson was subbed off on 52 minutes for big striker Atdhe Nuhiu.
Owls players wanted a penalty on 56 minutes as they appealed for a handball inside the area from another long throw.
Jack Butland was called into action as Helan took his side on the counter and eventually the ball fell for Nuhiu whose shot was well saved. From the resulting corner the Reds cleared but a ball was punted back in which fell for Fryatt who volleyed home a minute before the hour.
The visitors should have taken the lead but Butland had other ideas as he first denied a point-blank header before the rebound was somehow scooped over.
Barnsley made their first change as Dale Jennings replaced Jacob Mellis on 63 minutes.
Again the Reds came forward with McCourt the man pulling the strings, he danced forward before hammering low at goal but a deflection took the ball wide for a corner.
The Reds made their second change as Kelvin Etuhu came on for Paddy McCourt.
Wednesday continued with their aerial three as a deep cross swung in from the right was headed a couple of yard wide by Nuhiu on 80 minutes.
The Reds' final change came on 85 minutes with Marcus Pedersen coming off for Jason Scotland.
Four minutes of stoppage time was added and both sides were determined to find the winner. The visitors won a free-kick 25 yards from goal and had a real chance in stoppage time to find a goal but McPhail curled over.
Full time.
Teams
Reds: Butland, Kennedy, Cranie, O'Grady, Perkins, Wiseman, Pedersen (Scotland 85), Mellis (Jennings 63), M'voto, Fox, McCourt (Etuhu 73).
Subs: Hassell, O'Brien, Dawson, Cywka.
Sheff Wed: Kirkland, Buxton, Reda Johnson, Zayatte, Roger Johnson, McPhail, Antonio, Helan, Fryatt (Lavery 83), J. Johnson (Nuhiu 52), Olofinjana.
Subs: Martinez, Llera, Palmer, Maghoma.
Referee: Robert Madley
Assistant Referees: John Flynn & Harry Lennard
Fourth Official: Tony Harrington
Man of the Match - Sponsored by Napoleon's: Paddy McCourt
Attendance: 13268 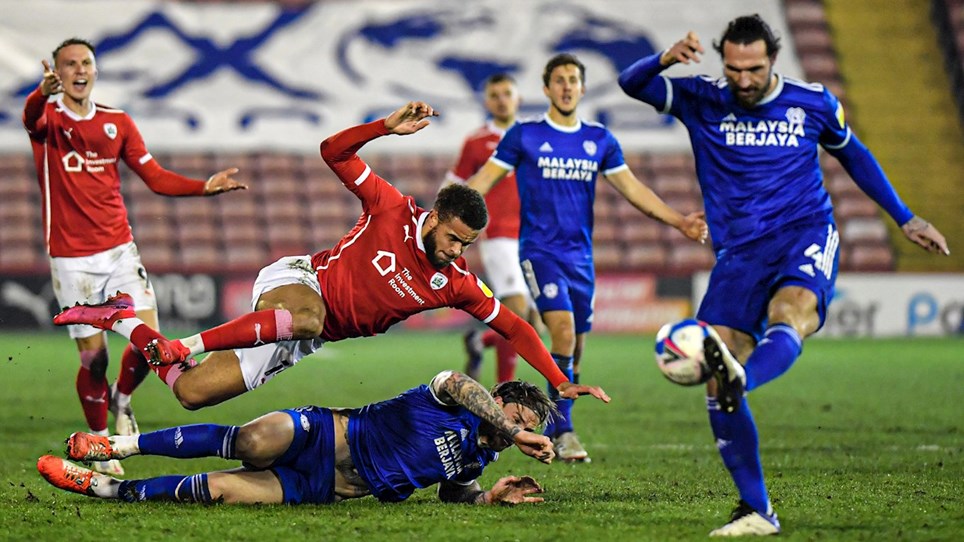