Pre-match reading ahead of our midweek Sky Bet Championship clash with the Potters here at Oakwell.

The Reds are back on home soil this Tuesday evening in a 7.45pm meeting with Stoke City as we play one of our games in-hand.

We will be looking for a quick reaction following the defeat at Derby County on Saturday, a result that put an end to our recent upturn in form that had breathed new life into the possibility of escaping the drop. 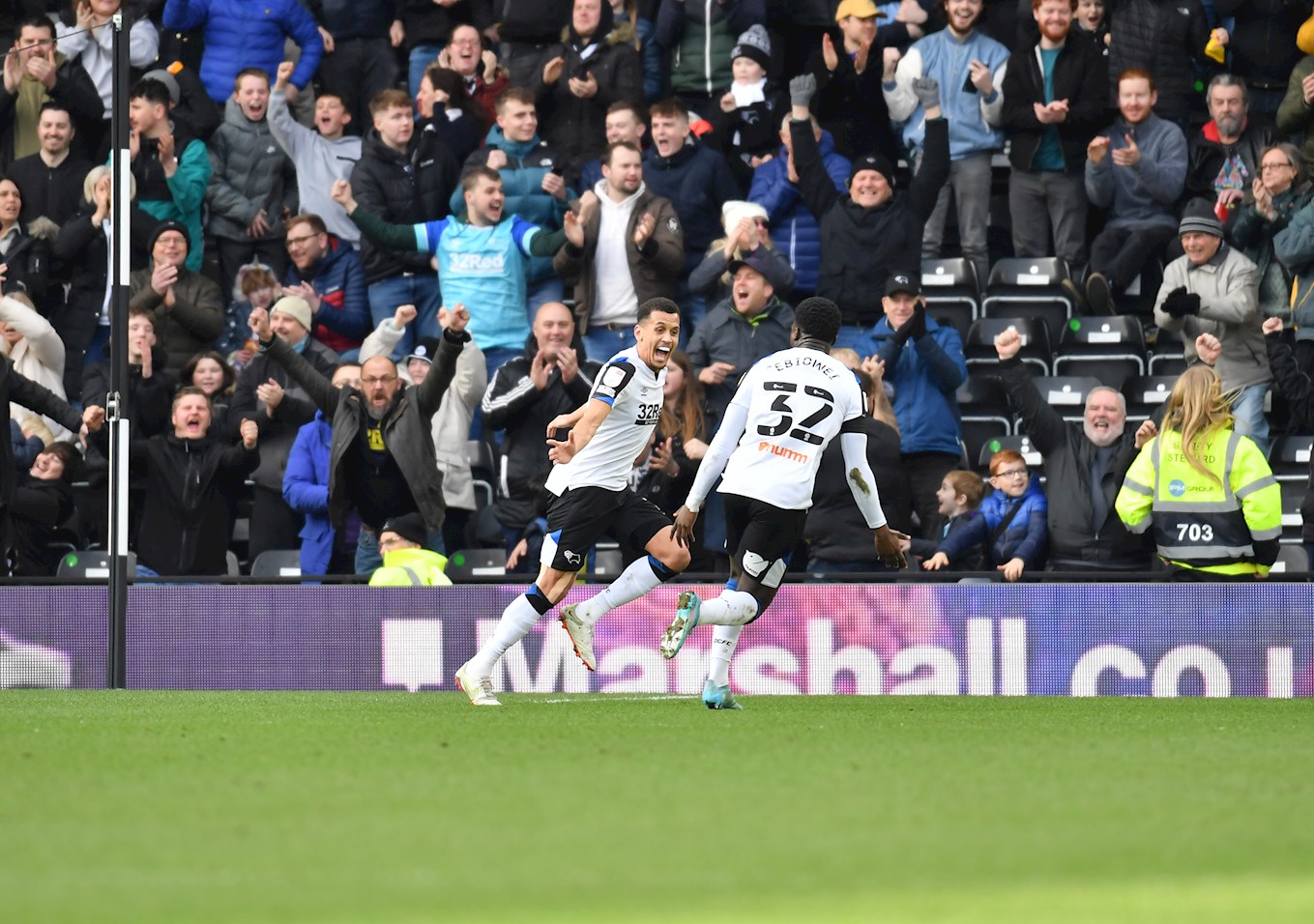 That mini-run of positive results that had lifted everyone's mood not only saw victories picked up, but a real increase in the battling qualities needed in relegation fights such as this. But at Pride Park the Reds were second best in all departments. Not only poor in terms of quality on the day, but lacking in that bite and desire to win individual duels.

Seen off by a goal in either half from former Manchester United forward Ravel Morrison, the Reds did create a number of interesting openings, but the final ball or end-product was sadly missing.

That defeat saw our opponents leapfrog us in the Sky Bet Championship standings, moving a point above us into 22nd, but the Rams have played two extra matches. With the team in 21st, Reading losing to Millwall on the same day, there wasn't much damage done to our survival chances on the face of it. 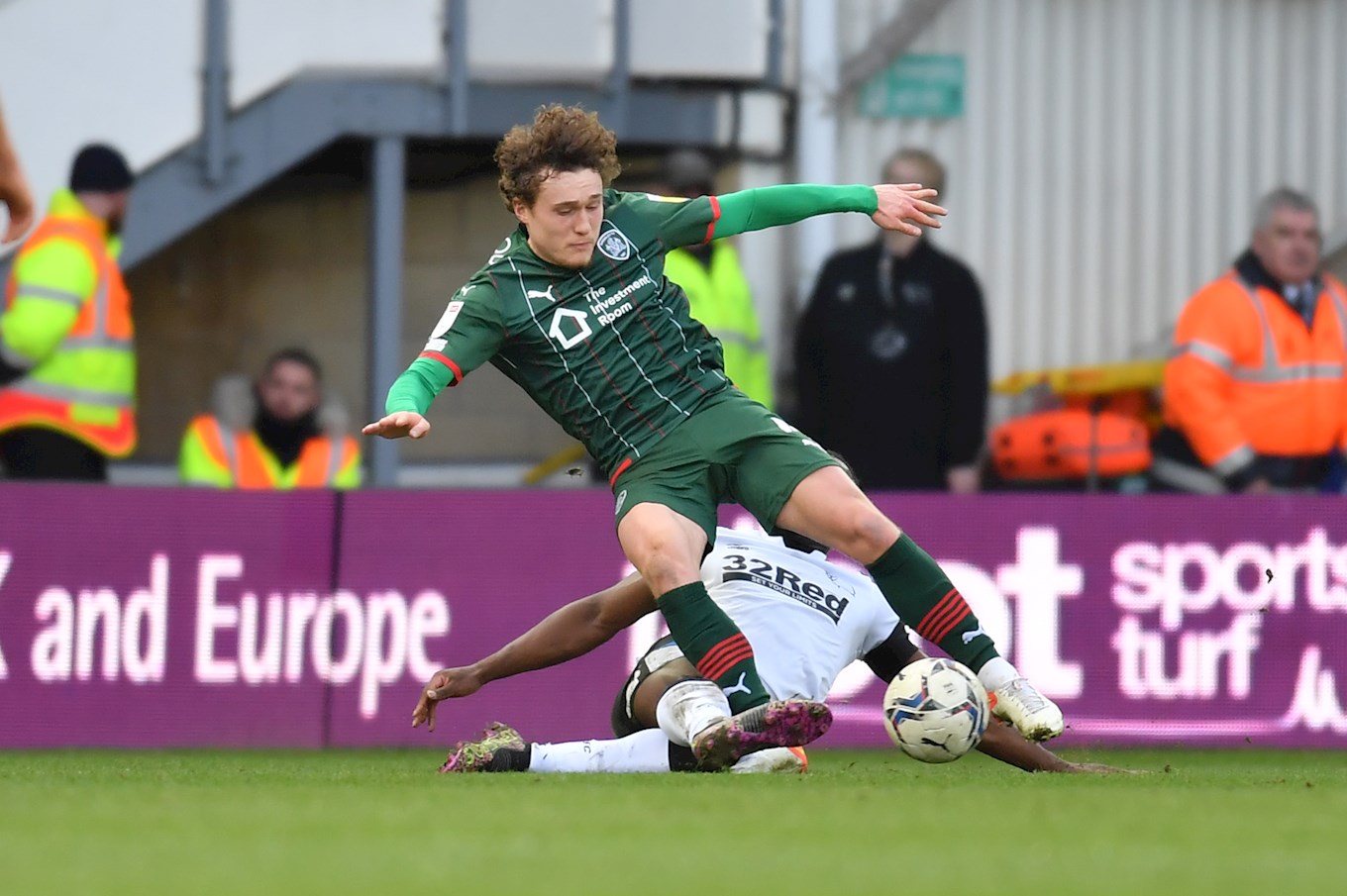 But the way in which Barnsley were out-fought and out-thought by a fellow relegation-battler must give cause for concern for Reds boss, Poya Asbaghi.

The Swede admitted, post-match that Derby were the better side and that not enough of his players turned up on their A-game. A bad combination which dented recent optimism, but everything still to play for.

We now turn our attentions to a big 10 days or so of Championship action that could very well determine our true trajectory. And we'll do so in South Yorkshire. With three consecutive home fixtures before the short trip to Sheffield United rounds off the month of March. 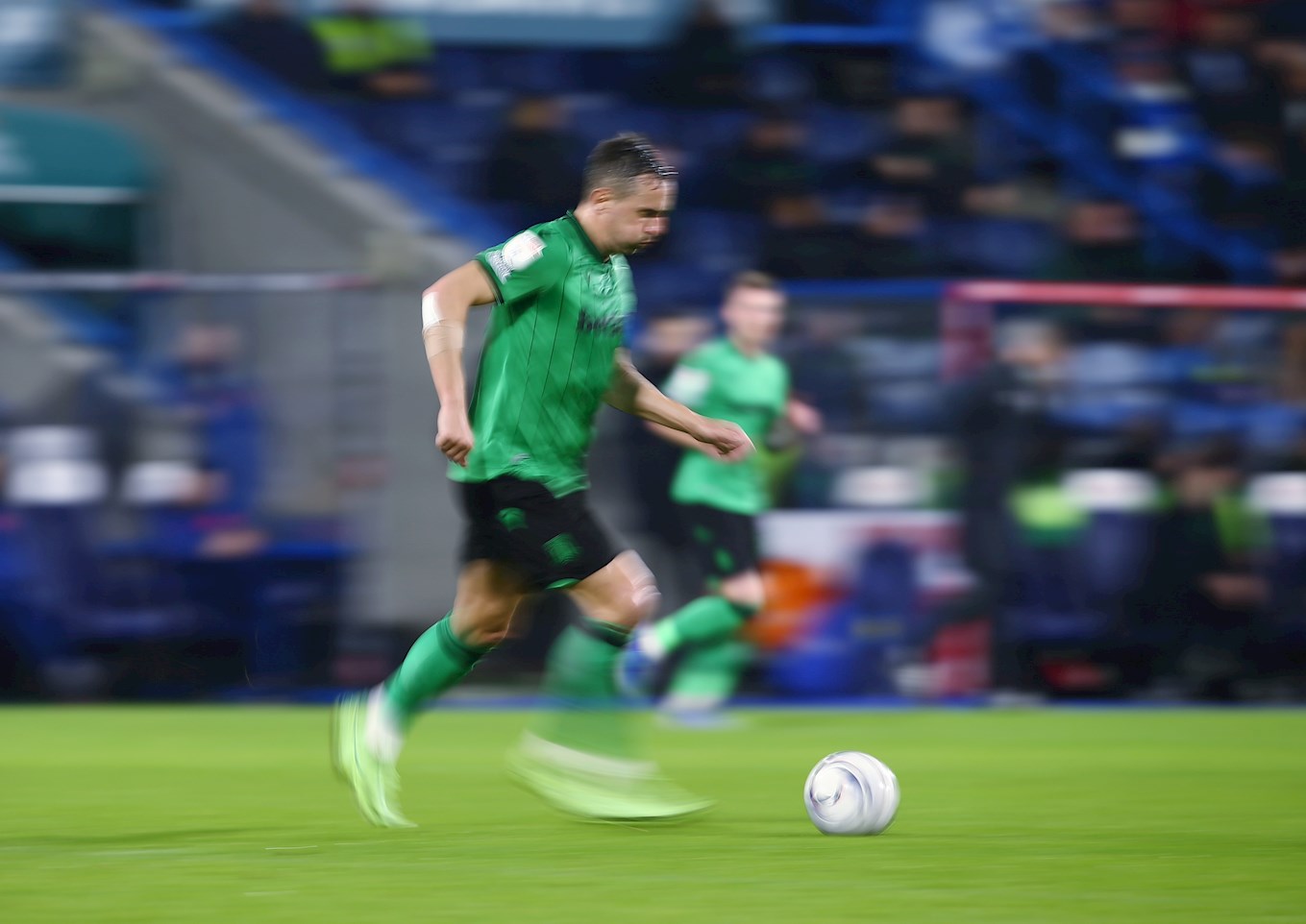 On Tuesday night we kick-off this four-game run with a clash against a Stoke City side who've fallen dramatically away from the promotion mix and back into mid-table, without a win in six games.

It has been a tough few years for the Potters fanbase following their relegation from the Premier League back in 2018. And whilst it’s taking the former Northern Ireland manager, Michael O’Neill some time to shape a team in his image, he has proven a steady hand when at times the Potters looked like they might well slip through a second trapdoor and into League One. 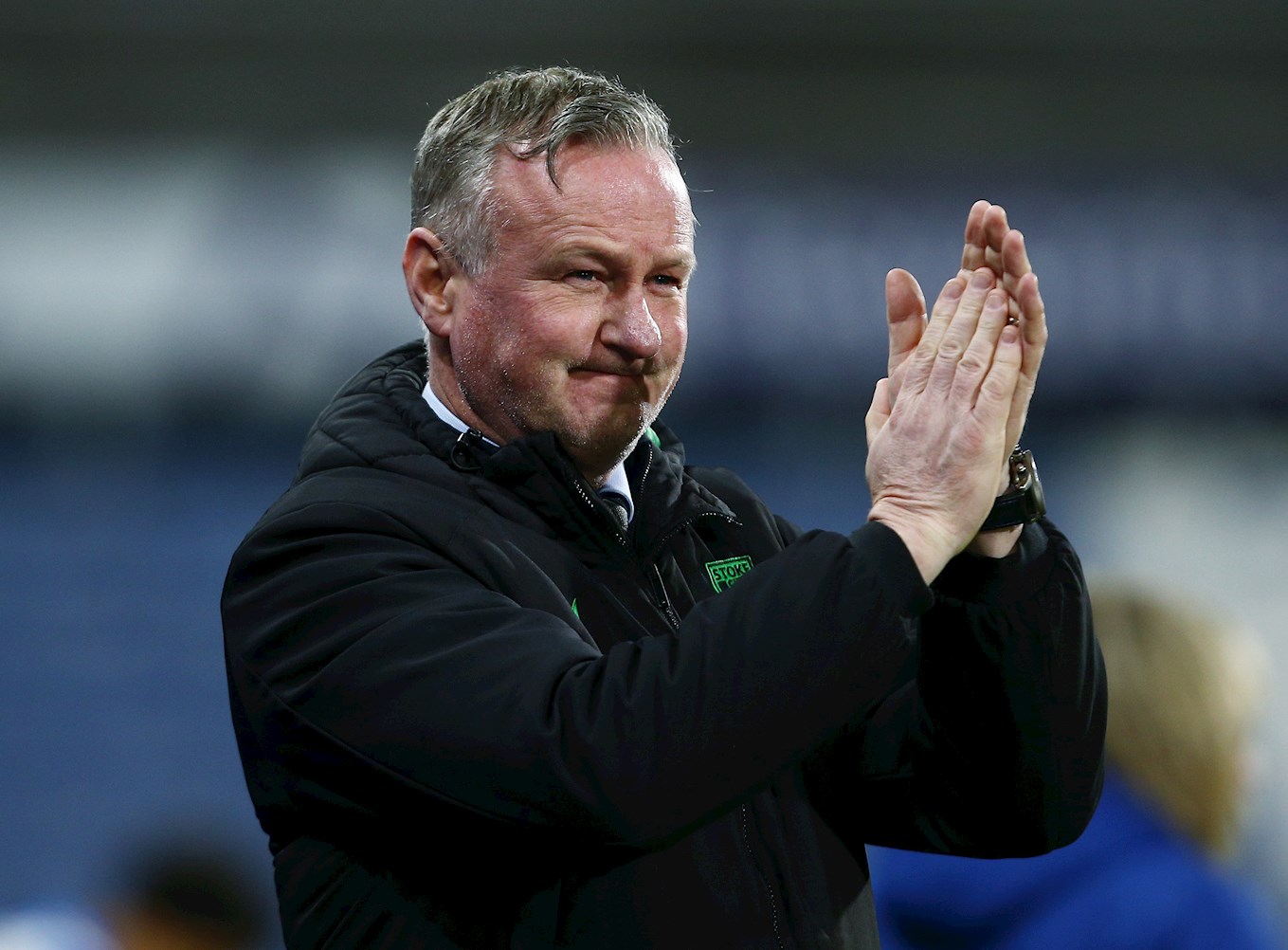 After three consecutive Sky Bet Championship campaigns in which the Potters have struggled in lower-mid-table, it appeared earlier this season that Michael O’Neill had found a winning formula at last, with Stoke City challenging for a play-off position at the season’s halfway point. But things have gone badly awry since the turn of the year for the Potters, who’ve won just two of 10 games in 2022.

It's difficult when looking from the outside at the squad at O'Neill's disposal to understand why they aren't much higher in the table.

Proven quality in midfield with the likes of Mario Vrancic and the evergreen Welsh international Joe Allen. Exciting forward talent in the shape of Tyreese Campbell, Josh Maja and former Barnsley youngster Jacob Brown. And in defence, the likes of Phil Jagielka and Liam Moore are experienced, successful operators at this level and above. 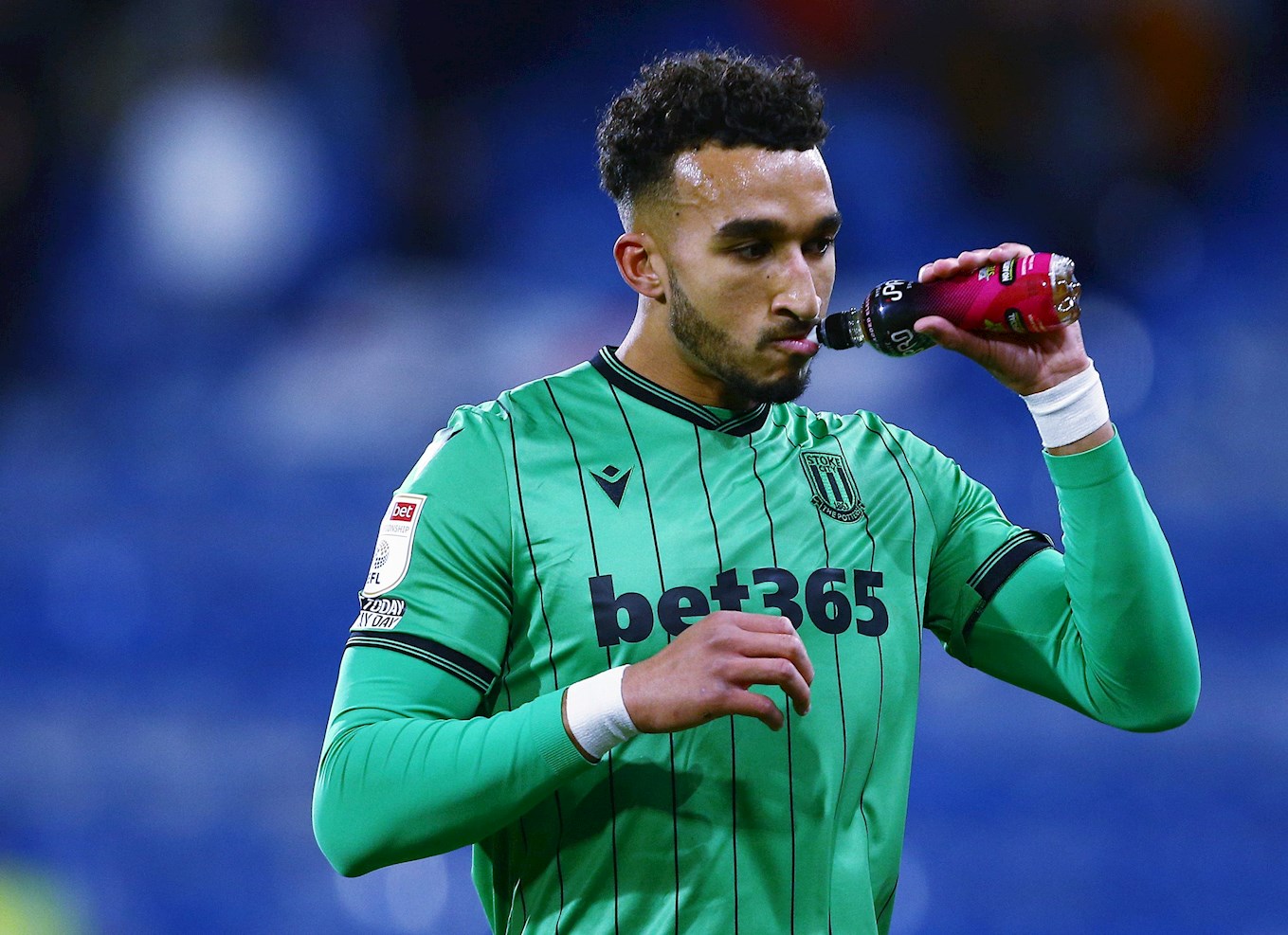 But the Potters arrive on Grove Street on Tuesday night without a win on the road in their last five games in all competitions.

Usually operating a variation of 3-5-2 in terms of a system, there have been calls from Stoke supporters for a change in shape in recent weeks.

When the Reds, then under Markus Schopp visited Stoke in the reverse fixture, it was an entertaining 1-1 draw, but we certainly had our goalkeeper, Brad Collins to thank for that.

He excelled on the night, making a number of marvellous stops on top of a penalty save right on half-time, thwarting Vrancic from 12 yards.

In terms of last season and this fixture, the Reds were in cracking form on a cold February evening at Oakwell as goals from Callum Styles and Daryl Dike saw us to a 2-0 victory. 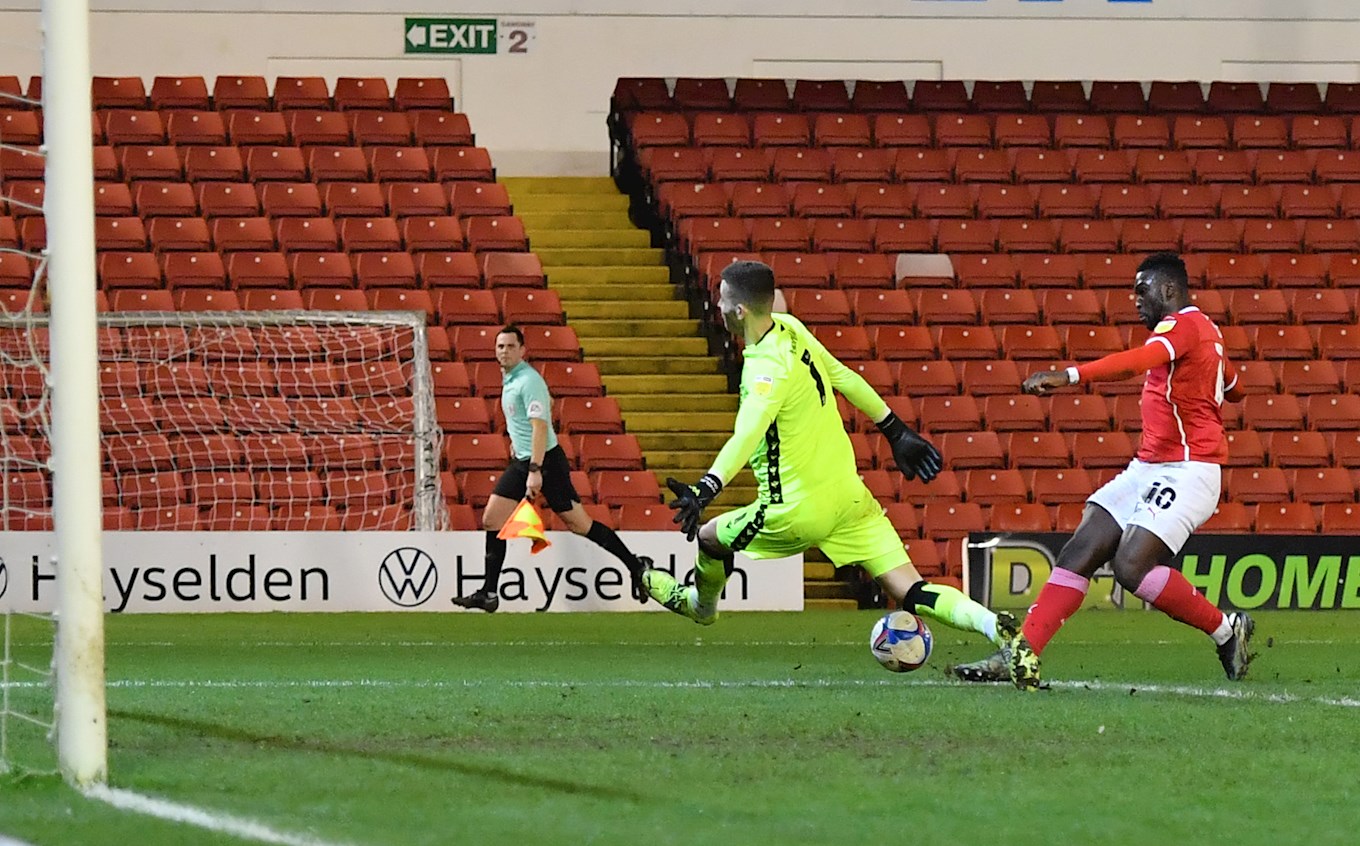 And we also lead the all-time head-to-head record against Stoke, with 23 wins to their 22. Our last loss in this clash was actually a 4-2 defeat in 2019, which was the first game that O'Neill took charge of for Stoke. He'll be hoping for something similar on Tuesday.

The man in the middle for this clash will be Leigh Doughty. And just like the weekend's referee at Derby, this will be a 'double' for Doughty, as he also took charge of what was a bad-tempered affair at the bet365 Stadium back in September. 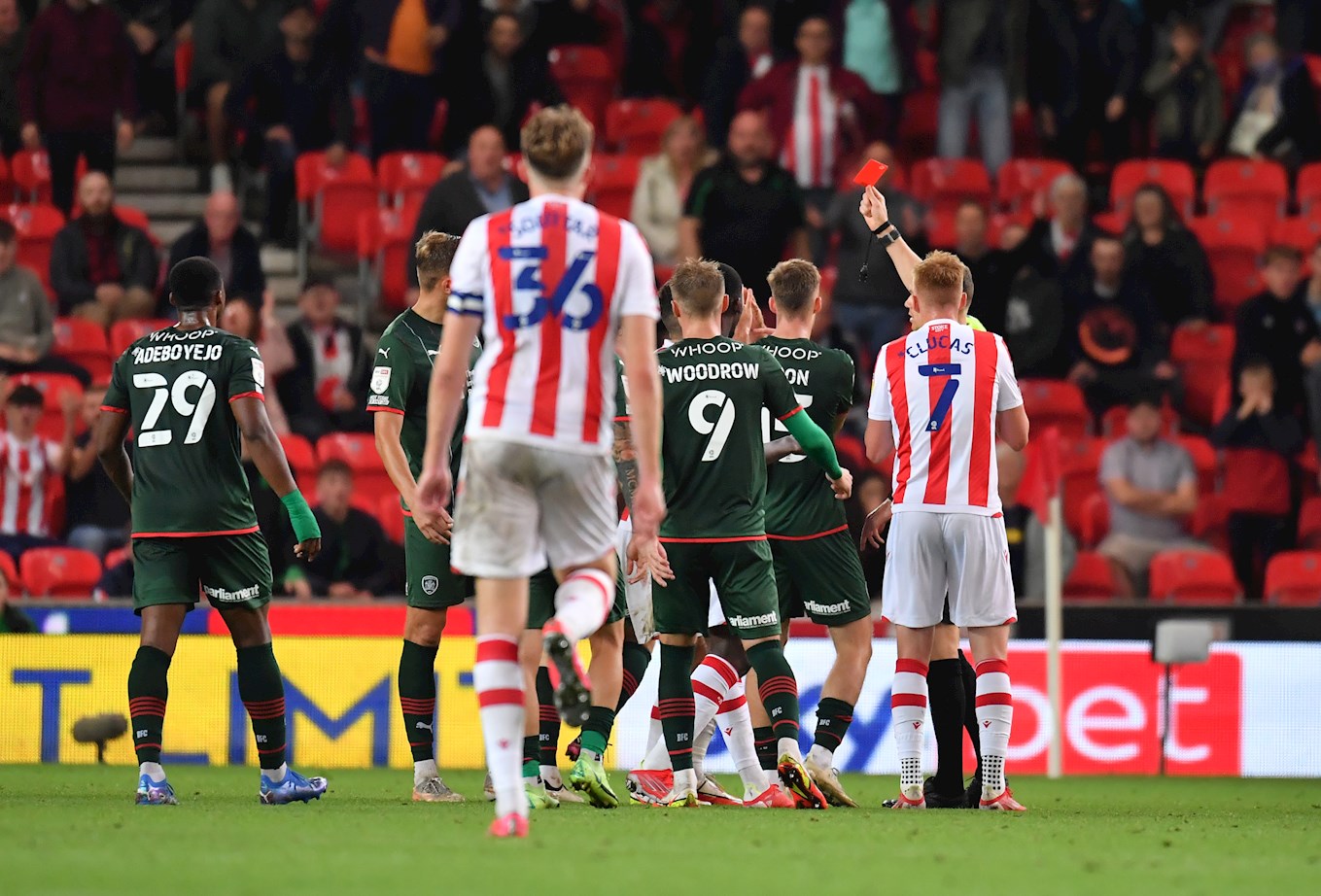 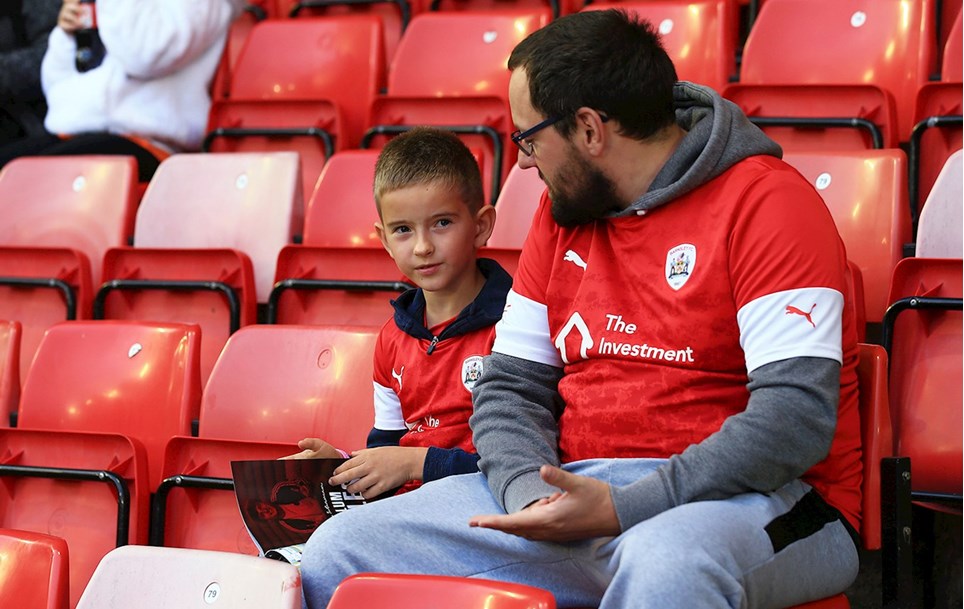 A 95th minute Lewis Baker strike prevented the Reds from making it three consecutive home victories, after going ahead in the second half through Domingos Quina's cracking opener.

The game began in scrappy fashion, but it was Barnsley who looked the most dangerous on a cold evening here at Oakwell. French defender Rémy Vita sent an early effort fizzing wide from 30 yards, whilst Callum Styles saw a strike from the edge of the box blocked crucially by veteran Phil Jagielka.

Baker, who would later find the net, tried his luck on nine minutes, bending a left-footed shot against the foot of the post before Stoke captain, Joe Allen skewed an effort wide when well-placed.

Quina would see defenders blocking a run and shot at goal whilst Callum Brittain drove a powerful low drive at goal, only for Potters' 'keeper Jack Bonham to stop well at his near post.

There was very little in the contest as we headed into the half-time interval.

There were little opportunities created in the opening stages of the second half before the game was halted for five minutes with responders attending to an incident in the Ponty End. That added time would come back to haunt the Reds.

But within minutes of the match restarting, Barnsley went in front, as Quina dribbled across the Stoke penalty area, cut back onto his left foot and scorched a shot into the far corner with real venom.

That goal sparked the visitors into life and Josh Maja screwed a shot inches wide on the turn with Reds' 'keeper Brad Collins rooted to the spot.

A contentious incident as we entered the final 10 minutes as Quina bamboozled his marker inside the box and looked to be tripped as he did so, but referee, Leigh Doughty waved play on much to the chagrin of the Reds supporters.

Both Matty Wolfe and Devante Cole entered the fray in the closing stages but the Potters' pressure paid off as Baker was first on the scene to a loose ball on the edge of the box and curled home expertly from 20 yards, giving Collins no chance and cruelly denying the Reds what would have been a priceless three points. 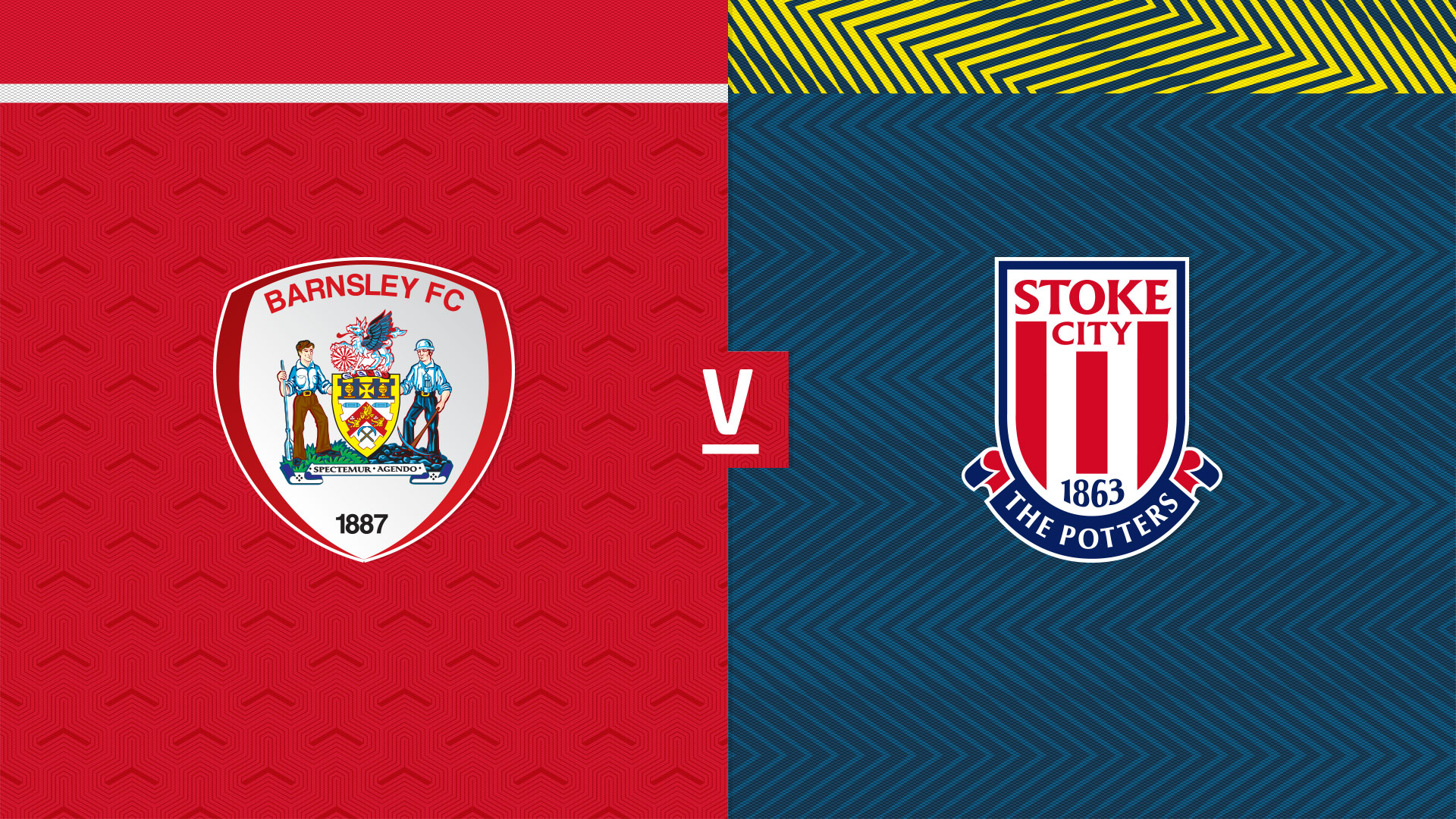 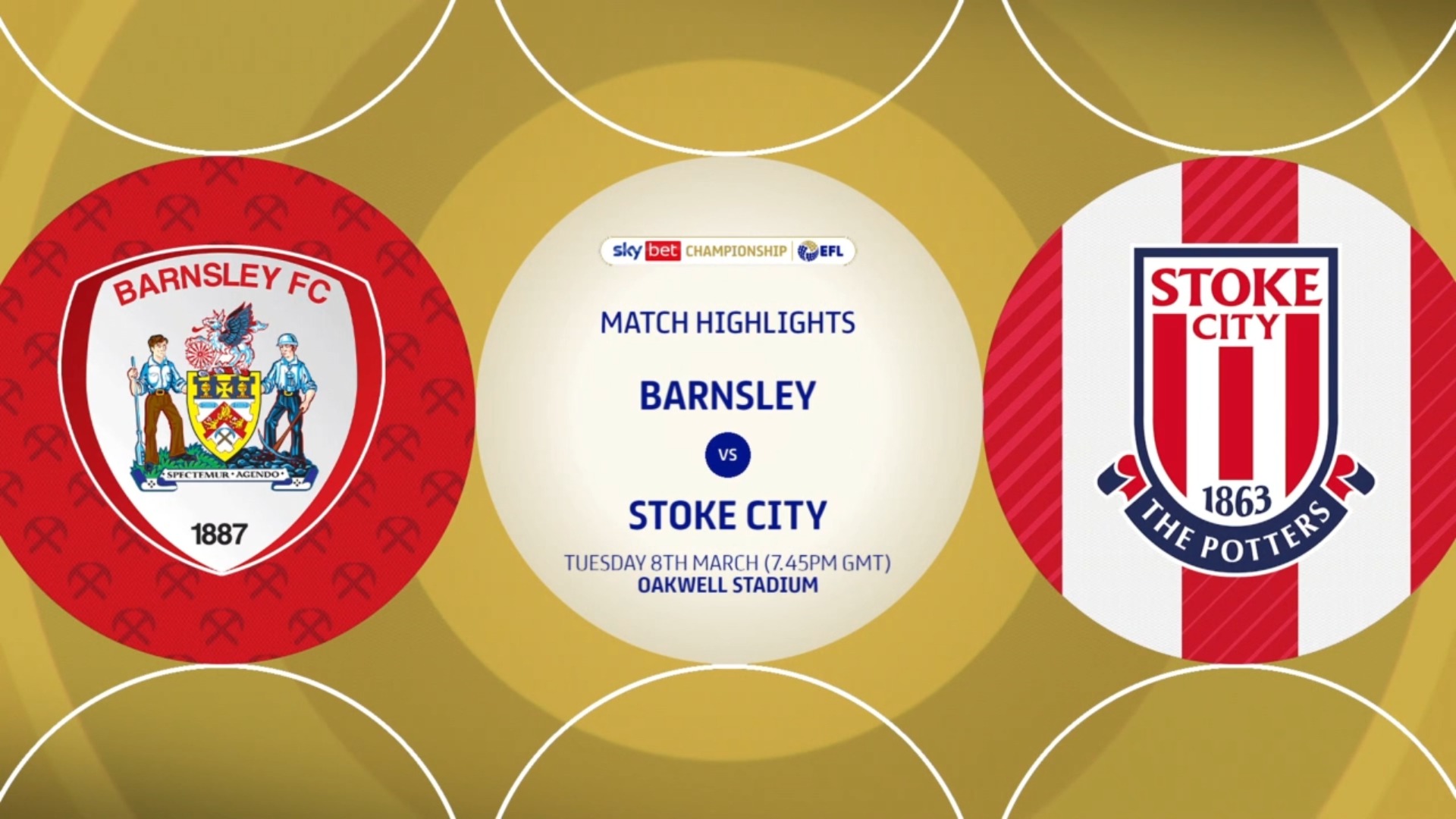 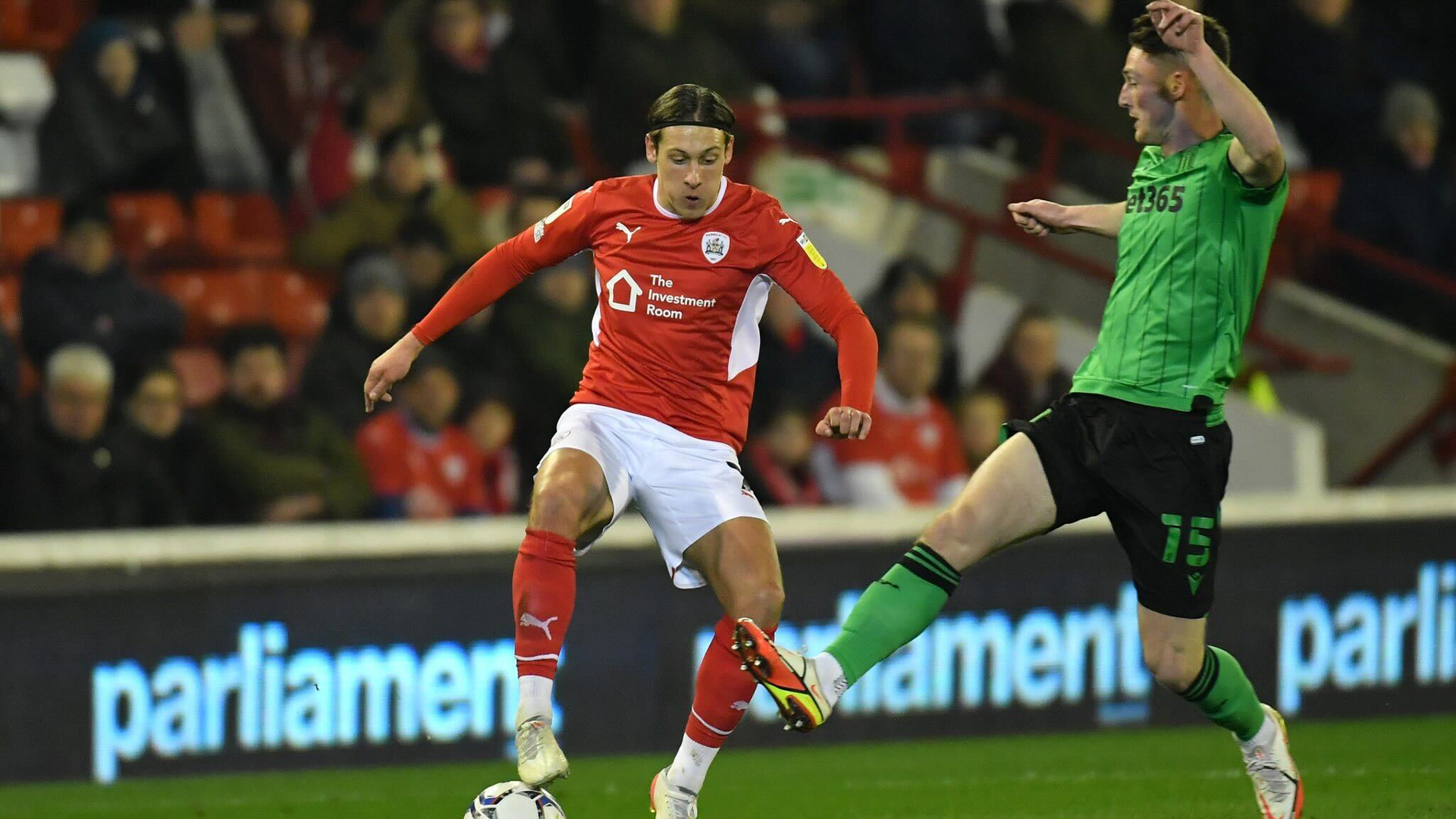