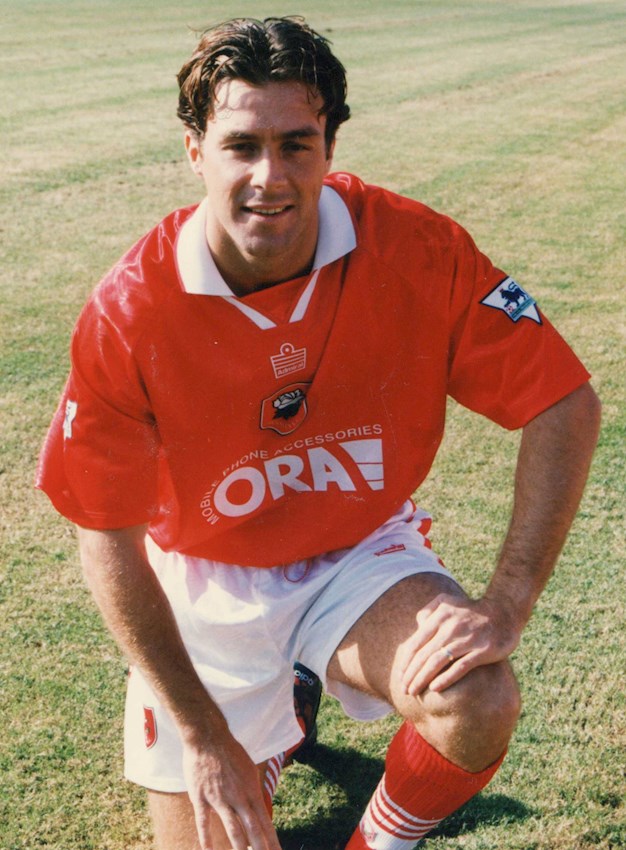 Middleton born centre forward Ashley Ward began his career professionally with Manchester City in 1989, but after a brief loan spell with Wrexham where he scored twice in five appearances, and a couple of substitute appearances in City colours, he moved on to Leicester City.

His time at Filbert Street was short-lived, after just 15 games, mostly as a substitute and no goals registered he was back out on loan, this time with Blackpool where he scored once in his two games for the Tangerines.

He would leave the Foxes permanently at the end of 1992, joining Crewe Alexandra where his career really kick-started under the tutelage of Dario Gradi alongside a number of players who’d eventually rise to the top of the English game.

34 goals in 76 appearances for the Railwaymen in two full years at Gresty Road alerted bigger outfits and in December of 1994 it was recently relegated Premier League club Norwich City who captured his services for £80,000.

A further 21 goals in 60 games for the Canaries proved that Ward was a capable operator in the higher echelons, so much so that his form in front of goal saw Premier League side Derby County splash out £1,000,000 for the big forward, and in the 1996/97 campaign at Pride Park, Ashley notched 10 goals in 44 games league and cup.

He bagged another goal for the Rams, a penalty against the Reds in August of 1997 in a 1-0 defeat of Barnsley in the Premier League and in a strange quirk he was the Reds’ new striker just a couple of weeks later, joining Danny Wilson’s side for a reported £1,300,000 fee.

Ward’s impact at Oakwell was frankly staggering. In just 15 months with Barnsley he plundered 25 goals in 61 appearances, some memorable ones too including the winners away at Aston Villa and Liverpool as well as strikes against Tottenham Hotspur and Sheffield Wednesday at Oakwell.

In December of 1998, Ward was enjoying a purple patch in front of goal, 6 goals in his previous 8 games and it was big-spending Blackburn Rovers who swooped for his services, paying the Reds a massive (at the time) £4,500,000 to take him to Ewood Park. He’d scored in his final Reds appearance, the 7-1 thumping of neighbours Huddersfield Town and his departure soon afterwards left the Oakwell faithful saddened such was his stature amongst the Barnsley supporters.

The striker spent 18 months at Blackburn but was never as prolific and left for Bradford City and the Premier League in August of 2000. His time at Valley Parade was a more satisfying stay, scoring 20 goals in just under 100 appearances for the Bantams, including four strikes against Barnsley in the 2001/02 season.

He finished his playing career with a two-year spell at Sheffield United, scoring five goals in 35 games for the Blades.

Ashley is now a successful businessman and since retirement he and his wife have made their money in the property development sector as well as spending time on reality TV shows.