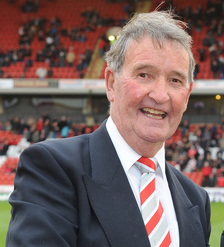 When Consett-born defender Barry Murphy arrived at Oakwell in July of 1962, little did he know that he would be going on to write his name forever into the annals of Barnsley FC history.

He was 22-years-old when signing for the Reds and only managed 68 appearances across the first four seasons he spent at the club, surely fearing his days were numbered at Oakwell. But in March of 1967 he made a long-awaited return, out of position at left back rather than on his natural right hand side of defence and would turn his fortunes on their head by then playing 182 consecutive games, into the bargain beating Harry Hough’s club record of 166 successive appearances.

He was also the first ever Barnsley FC substitute, replacing Brian Jackson against Luton Town in 1965.

Barry was part of the Reds side who were promoted from the Fourth Division back in 1968.

He made his last appearance for the Reds in April of 1978, his 569th for the club, a record that still stands to this very day, and if we are being perfectly honest, it's a record that will probably never be broken such is the nature of modern football.

After retiring from playing he became youth coach and then first team coach under Allan Clarke before following him to Leeds United in 1980.

After finishing his career in football, Barry returned to Barnsley Football Club and now works as a club ambassador, tour guide and matchday host in the Copier Systems Legends Suite where he looks after our guests in the hospitality areas of Oakwell.