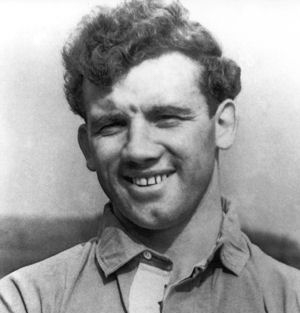 When you ask Barnsley FC supporters of a certain age who their favourite player was, if they were lucky enough to have seen the Reds during the 1950’s, the name Arthur Kaye would be mentioned more often than not, such was the impact that the Higham born aside-right had on the football club.

Superb dribbler, quick, skilful but aggressive, Kaye was a joy to watch at Oakwell and showed enormous loyalty to his club throughout.

After success with Barnsley Boys, local rivals Sheffield Wednesday tried to snare the young man but he told them Barnsley FC was the only club for him, signing terms in 1950. He made his debut as a 17-year-old in January of 1951 against Luton Town in a 1-1 draw.

In 1952 he was conscripted into the Royal Army Marine Corps and played for the British Army.

On completion of national service in 1954, he returned to Oakwell full time and helped the Reds back to the Second Division, scoring six times in 45 games . On the opening day of the following season Kaye scored the winner against Leeds United and by now, his wing-play was gaining attention, he was soon called up to the England U23 squad.

The following 1956/57 campaign was a magnificent one for Arthur, one that began with him scoring the winner against Swansea City after collecting the ball on the halfway line before dribbling beyond man after man and slotting home for a 3-2 victory. He scored another 17 times in that stellar season, effectively keeping the Reds in the division.

In the summer of 1958 ahead of the World Cup in Sweden, Kaye was selected as one of 40 players in the preliminary squad, but sadly didn’t make the final cut of 22.

After a dispute over wages with manager Tim Ward, Kaye decided to leave when Barnsley accepted an offer of £13,500 from Blackpool for his services, this was May of 1959 and signalled the end of a fine career at Oakwell for one of the true Barnsley greats.

He would have relatively successful spells later down the line at Middlesbrough and then Colchester too, before retiring from the game and coming home to Barnsley where he traded as a joiner until his death in October of 2003 at the age of 70.